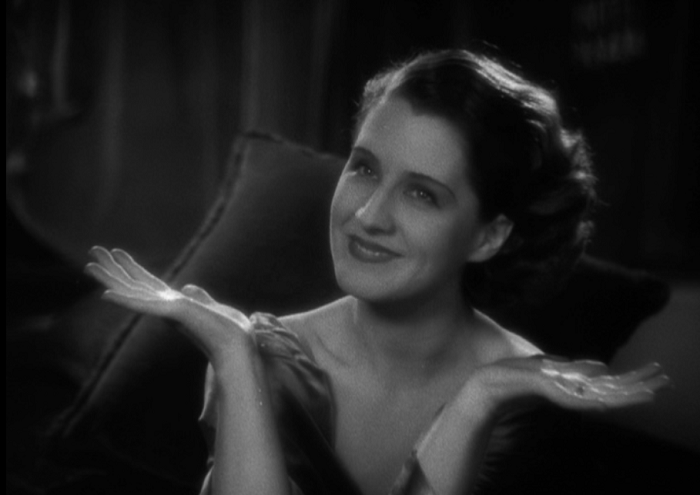 “Yours neither, ma’am. A lot of people don’t believe that gag about being born equal.”

Sitting firmly on that line between daring and dull is 1931’s A Free Soul. The story of a father-daughter relationship and how it’s almost ruined by their vices has a strong start and a ludicrous finish– but, of course, we’ll get to that in a minute or so.

Jan Ashe (Norma Shearer) and her father Stephen (Lionel Barrymore) are members of the elite (and elitist) Ashe family and represent the twig on the family tree that no one wants to talk about. That’s fine with Jan and Stephen though– they have each other, and they’re the best of pals. Stephen is a successful lawyer who relies on his friend Eddie (James Gleason) to carry his flask while they’re in the courtroom. His latest case involves a gangland murder and a client named Ace Wilfong (Clark Gable) who apparently left his hat at the crime scene.

Ace and Jan meet right before his final day in court and, judging from the look Jan shoots him, she’s pretty concerned about just how tight that suit is– and what they can do to relieve the tension. Back on the outside after a successful defense that relies on hat sizes, Ace steals Jan away from a family shindig with her charmless fiance Winthrop (Leslie Howard). Ace and Jan are almost mowed down in a drive-by from a rival gang (thrilling Jan to no end), so they head back to Ace’s place above his casino, where one can readily assume a popped champagne cork and breakfast may be involved.

Months pass, and Jan’s entanglement with Ace grows while Stephen’s fondness for the bottle increases as well. It’s clear that Jan is just using Ace for sex, but he doesn’t see it that way and approaches Stephen one night about marrying her. Stephen is shown through much of the movie to be a kind, irascible guy who is a pretty nice drunk, which is why everyone seems to tolerate it. Once Ace proposes to marry his only daughter, though, he turns vicious. He burrows his eyes into Ace. “The only time I hate democracy is when one of you mongrels forget where you belong.”

What does that mean exactly? Up to this point in the movie, Stephen and Jan have been rich and carefree, eagerly distancing themselves from their conservative, old money family. But this moment allows Ashe to reveal that he’s not so far from the rest of the family tree on these matters, seeing Ace’s feeble attempts at social climbing as something that must be crushed without hesitation. But it’s a sobering moment for the audience as well; up to now, we’ve only really seen Ace from Jan’s perspective, as a sexy hunk with a big smile and a few dangerous hobbies. In reality– the reality Stephen knows and understands– he’s a crook, involved in activities that even the most modestly moral person would be disgusted by.

But Jan’s written off this version of reality. Ace, spurned by her father, finds Jan in his apartment above the casino wearing a bathrobe. After they fight about their future, two things are clear: Ace wants a long term commitment, and Jan just wants him to stop talking and come closer. (This reversal of the usually perceived gender roles is one of the film’s highlights, though it doesn’t last long.)

That night there’s a raid in the casino, and Stephen is being drunk and disorderly. To shut him up, the gang tosses him up in Ace’s apartment, where he discovers Jan lounging in a robe. Seeing each other like this, with the nature of Jan’s illicit affair suddenly revealed, shames both of them. They silently leave and head back to their apartment.

Director Clarence Brown was one of MGM’s best in the 1930s, regularly turning in beautifully crafted films like Anna Christie and Sadie McKee. He captures a lot of emotion in A Free Soul, often hanging back for large moments and zooming in close for the quiet, passionate ones. Each frame is meticulously composed. Anyone who wants to understand his nomination for Best Director for this movie can get a taste from one beautiful shot that lasts only a few seconds but demonstrates Jan’s thought process changing in one quick, silent moment:

Unfortunately, the film seems to lose its way after this moment. While the scenes of the two in Yosemite are fine, showing the real struggle for Stephen of breaking his alcoholism, we soon see that the entire fight is immediately for naught. As soon as they reenter town, he heads for a drug store and picks up a bottle. In fact, this sequence may be one of the most downbeat views of alcoholism you’ll get on film, suggesting that months of detoxing and love can be a complete waste because an alcoholic will always want alcohol, and they’re just lying in the meanwhile.

Stephen disappears– and, I’m sorry to say, his actual disappearance is goofy as hell. Jan and Eddie see him approaching with a bottle in his hand, and the rush toward him, but a train intervenes. After the train is gone, so is he, leaving the audience to imagine Lionel Barrymore holding onto one of the cars ‘Buster Keaton in “Cops”‘-style and chugging away.

Deciding that if her father is off the wagon, she has no reason not to be, Jan returns to Ace. But instead of finding the big sexy lug she could push around, she finds a wounded, petulant man who demands marriage. It’s obvious before that Jan’s aloofness had kept him in his place, but now he feels he must be forceful if he is to get what he wants. This includes a few nasty threats, naturally, which Winthrop walks in on as they’re being delivered. Since Ace promises to start spreading rumors about Jan’s sexual activity unless she marries him, it looks like there’s not much she can do to save herself and her reputation from further harm.

Before we get into the leap from Act 2 to 3, a brief reminder to my younger readers (who are reading this and not just looking for dirty pictures): when women spent the night at a man’s house in the 1930s, it was a scandal. If a woman from a respectable background was caught with a man who ran liquor, it may have made front page headlines– believe it or not, newspapers would use sex to sell copies. Jan’s indiscretions would wreck any future chance at a relationship from anyone other than a pity-filled male suitor, and the rest of her family would probably abandon her, leaving her to fend for herself in the unpleasant world of the Depression.

Luckily A Free Soul has a sucker– I mean, romantic interest– in the wings by the name of Winthrop. He goes to Ace’s casino and shoots the gangster in cold blood, calling the police immediately afterward to claim he did so over a gambling debt. Suddenly in love with Winthrop again because he’s such a nice guy, Jan scours the city to find her father so that he can successfully defend Winthrop from the charge of murder.

A Free Soul isn’t the first pre-Code film to embrace the idea of ‘the natural law’, and it certainly wouldn’t be the last. That’s the ‘unwritten rule’ that men have a right to defend a woman’s virtue, up to and including murder if necessary. No one specifically invokes it, but it’s pretty much half of the basis for Stephen’s final, passionate plea: Winthrop killed Ace to protect Jan. Of course, the other half of Stephen’s defense is that he’s such a shitty parent that something like this is inevitable, which really only works when you die at the end of your plea. Which, as if on cue, Stephen does.

It’s a melodramatic, grandstanding moment, which fits the trajectory of the film’s last two acts for sure. But it also comes off as cheap. While Jan and Stephen’s relationship wasn’t perfect, him suggesting to her and permitting her freedom to live her own life shouldn’t be what damns him to die. In 1930s-sensibilities, Jan strayed from the path of good morality and must pay for it over and over again until she is sufficiently punished. Nowadays, it just seems like dramatic overkill, with every moment from Stephen’s disappearance calculated to ramp up the frantic, wild closing statement that Stephen delivers to the stunned jury.

A Free Soul was designed as a follow up to the critical and commercial smash The Divorcee, which a year earlier had won Norma Shearer the Best Actress Oscar. Shearer adopts the same kind of sexually adventurous character here, though, unfortunately, some of her silent movie instincts, including a bit of over-gesticulating, stand out quite noticeably. She’s also out-shined by several of the other cast members. Clark Gable, in one of his first prominent roles, is utterly compelling and natural as Ace, a fascinating ball of sexual frustrations. And then there’s Lionel Barrymore, a well-practiced scene stealer, who is given a big, climactic speech of such magnitude that it’s easy to forget there’s anyone in the movie besides him up to that point.

Maybe it’s that lack of focus that hurts it. While it’s about the divergent paths of Jan and Stephen and the unhealthiness of their relationship, the chemistry between Shearer and Barrymore bridge what the movie is trying to paint as an off-kilter partnership. The idea that Barrymore taught her ‘wrong’ by making her the titular free soul never sits right, and feels downright classist in execution.

Or maybe just that the film’s morality is too damned old fashioned to relate to. Nowadays, given the option to sleep with a young Clark Gable, who the hell would say no?

It was a mark of prestige that an actress could require “Gowns by Adrian” in her contract. As head designer, Gilbert Adrian chose the films on which he wished to work, reporting only to studio heads Louis B. Mayer and Irving Thalberg. “When Adrian made a sketch, no producer or director dared to change it” according to John B. Scura, who toiled in the MGM wardrobe dept for 41 years. Shearer would get two versions of a gown, from which she could choose, a major concession, I’m sure. Hedda Hopper wrote, “Because his clothes are worn by the biggest stars in the biggest pictures he has had more influence on women’s clothes than any man in history.” (Laura Jacobs) And, for anyone who loves old movies, his clothes are still the objects of panting desire.

Talking pictures are by no means elevated by the presentation of “A Free Soul,” last night’s screen contribution put on at the Astor. Nevertheless, it should be stated that Lionel Barrymore does all that is possible with his role.