The Circus Queen Murder: Going With the Flow

“Cigarette, Kelly? You know the modern circus dates back to Ancient Rome. In those days, the word circus was synonymous with blood. Tragedy. Tonight, the tent is empty.”

“All these empty seats will be filled with people.”

“What are they going to get for their money?”

Here’s a handy tip that will serve you well in life: don’t confuse Adolphe Menjou and William Powell. Both mustached and both looking pretty good in formal wear, Powell’s terse playfulness doesn’t line up perfectly with Menjou’s low key snark.

Powell had had a couple of successes under his belt in the forms of Philo Vance mysteries in the early 1930s, with titles like The Canary Murder Case, The Greene Murder Case, The Benson Murder Case, and (soon enough) The Kennel Murder Case. Columbia, not wanting to waste a dapper man with a mustache who could play detective just as well, found the procedurals of Anthony Abbott and let loose. The result, as they would say, is incomparable. 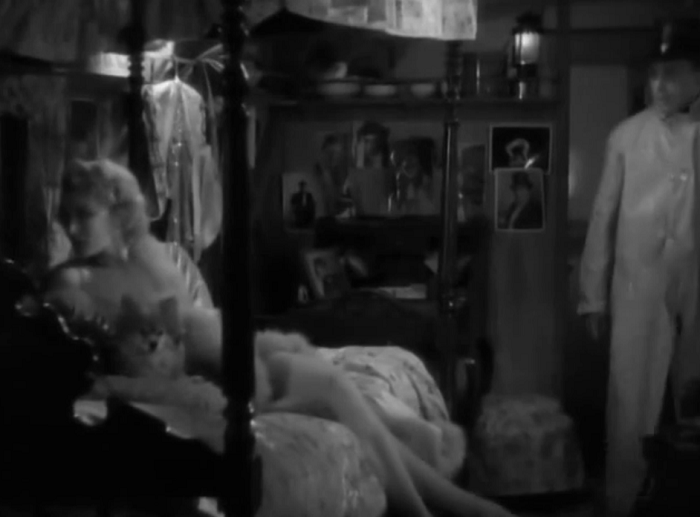 Menjou plays Thatcher Colt, a New York police commissioner who has had it up to his navel with beating down bootleggers. He decides to take a nice long vacation to a town he selects randomly by throwing his knife at a map. With him, he brings Miss Kelly (Ruthelma Stevens), a secretary who is snappy but has not-so-subtle romantic aspirations.

They arrive in town the same day as the circus, which is having that usual issue that circuses have with super sexy circus performers. La Tour (Greta Nissen) is a high wire acrobat who owns half of the company. Unfortunately she’s married to the brooding Flandrin (Dwight Frye) and not the sexy devil Sebastian (Donald Cook).

Thatcher is alerted to this by Jim Dugan (Harry Holman), the circus’ portly promotions man. It’s mostly of importance because someone has been throwing threatening notes at the circus performers, and La Tour gets in a bit of trouble when her horse is spooked. Someone is out to ruin the circus, and only Thatcher’s deducting skills can save the proverbial day. 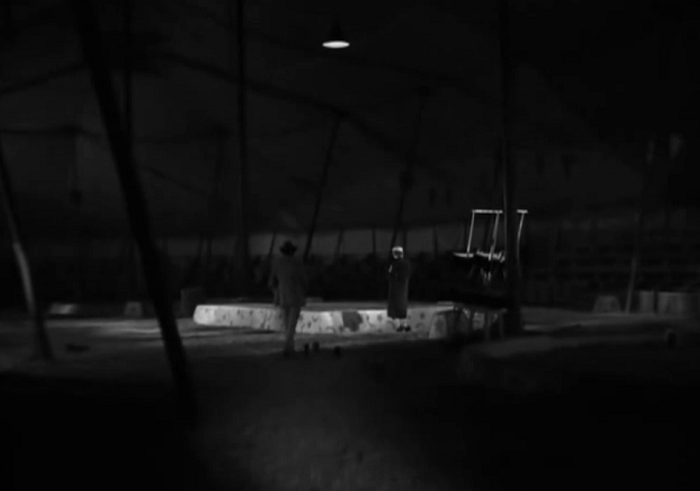 This movie looks nice. I like looking at things that look nice.

Not that there is much of a mystery. Flandrin disappears in an apparent murder, but Thatcher immediately deduces it as a feint– he’s killed La Tour’s pet dog and used it to make it appear as if he was abducted. Flandrin then dresses in blackface as a cannibal to bide his time, which Thatcher lets him do. The titular murder doesn’t happen until nearly 2/3rds of the way into the film when Flandrin shoots a poisoned dart from the top of the tent and ends La Tour’s life while she’s center stage. Miss Kelly is the only one who catches on to what he’s done and Flandrin soon has her as a hostage. He lays out his terms of how the story will play out to Thatcher at gunpoint– he’s going to murder Sebastian and then kill himself. Thatcher agrees, then plays a trick to save Sebastian so that Flandrin thinks he’s succeeded.

Our hero’s solution to save the day involves letting a crazy man kill himself in the middle of the circus, in front of hundreds of kids. 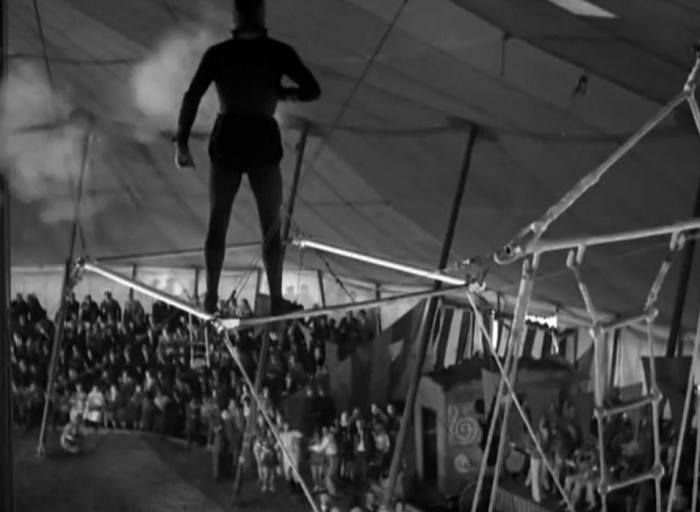 Weee, PTSD and peanuts for all!

The Circus Queen Murder is more of a crime movie than a mystery and while it looks good and has some snappy dialogue, the interminable footage of circus work keeps rolling on and a general overall malaise seems to emanate from Menjou. He figures out the plot pretty early but does nothing about it. Instead he’s a witness as much as the audience, which, when we know what’s happening, is kind of annoying for a lead character. Worse, Thatcher’s tricks that he uses– reading lips, speaking German, throwing a knife at one point– all seem to be random attributes stuck on in hopes that it will make him interesting. It’s like if Flemming wrote that James Bond was the world’s greatest pole vaulter– well, okay, you can take that two ways, but if they weren’t using an euphemism, what point would it serve? To set up a scene where James Bond pole vaults? And if he doesn’t pole vault, why even mention it at all?

Some of the rest of the cast makes up for it. Ruthelma Stevens, as Miss Kelly, has enough to chew on to be worth watching, though her aching longing for Menjou’s character is met with a blank wall. There’s a sense that the movie actually wants to be about her character, as Thatcher keeps her under his wing and she seems to be the only one with any empathy or smarts. She outwits Flandrin in act three by actually making use of Thatcher’s lip reading skills (and I’m sure she wishes she knew how good he was at pole vaulting), but Thatcher’s insistence on letting Flandrin finish out his planned suicide is just… well, ludicrous. There’s a really sad, smart ending that could have been in that denouement, but it sure as hell wasn’t there. 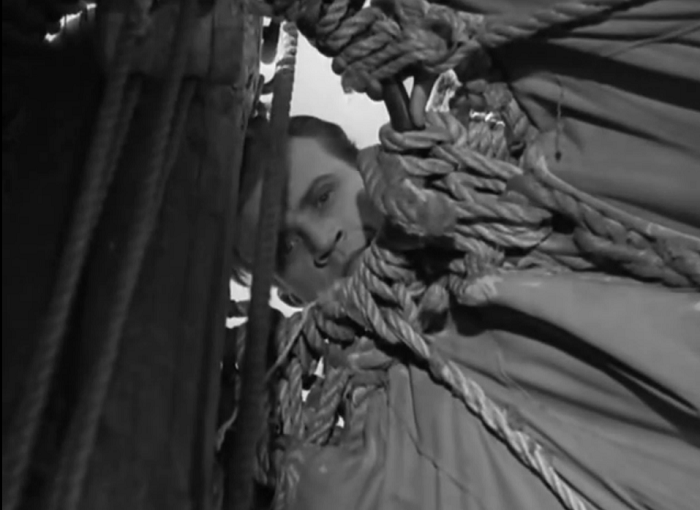 A movie tailor made for Dwight Frye peeping enthusiasts.

Also of note, Dwight Frye as the killer Flandrin has that perfect amount of scene chewing nastiness that makes him really come across as unhinged. He pretty much waltzes off with the proceedings, which makes his smug, satisfied ending where he kills himself the best (and undoubtedly most incredulous) part of the movie.

Director Roy William Neil (Black Moon) works around stock footage and a wooden Menjou to little avail, but, hey, the movie looks alright. The Circus Queen Murder, while fitfully amusing, seems to only condone the worst parts of human nature while missing much of any humanity in itself. It’s no Philo Vance film– hell, it’s barely anything. 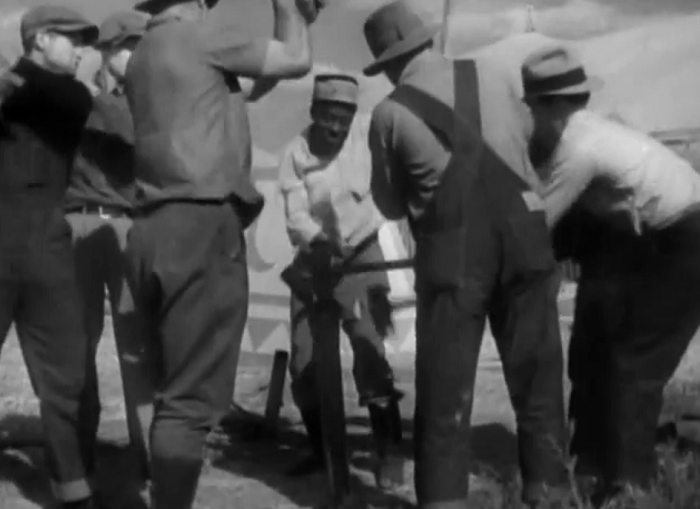 A shot from Rain or Shine. Is that Clarence Muse? Who knows. … oh, wait, IMDB knows, and yes it is.

Turns out that Josie’s been cheating on Flandrin with a third aerialist, the Great Sebastian. Sebastian is no Cornel Wilde, however. Rather, he’s played by that seductive devil, Donald Cook. If you remember Cook as Jimmy Cagney’s semi-shellshocked, self-righteous brother from The Public Enemy, you may be wondering about that “seductive devil” idea, but remember: he’s competing with Dwight Frye!

I think we’re very much on the same wavelength concerning this movie. Certainly not an Oscar contender.

No. It’s too bad, too, it has a really strong start but the last half is just really bad with the protagonist doing less than nothing to stop a murder spree. It’s pretty lame.