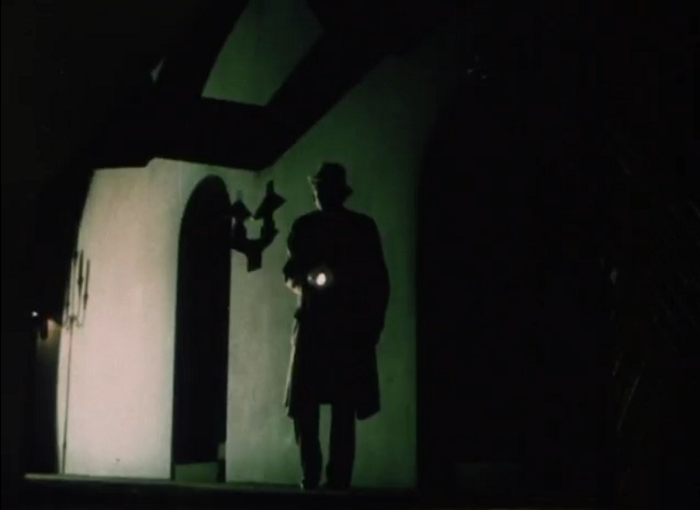 “Something tells me if I go in that room tonight, tomorrow I’ll be in my coffin!”

So about 12 years ago I was in Columbia, Missouri, and working at one of the student newspapers as a feature writer. Halloween rolled around and I took my girlfriend– a photographer for the paper– to a charity haunted house put on by a local fraternity. We got an early preview, meaning that not only were we in a haunted house, we were the only two guests in that entire haunted house.

As you can imagine, they felt the need to pull out all of the stops. Part of the attraction was a winding trail behind the house you could see shacks and other dangers lurking ahead. After a few brushes with cackling mad scientists and a few too many strobe lights illuminating dripping blood, we spent the moments between the stations frantically pushing the other person in front. We knew that, while we both loved and cared about each other deeply, the other person would probably have a richer experience if they were to be the first to meet the man in a jumpsuit carrying a chainsaw.

This kind of giddy sense of terror is one that comes out in Doctor X, a mix of several 30s genres to great success. The film’s comedy is very much in the vein of the later Abbott and Costello meet the Universal Monsters films, with the hero completely out of his element and jumping at every creaking floorboard. However, unlike Costello, hero Lee Taylor’s own journalistic sense of nobility kicks in, allowing him to alternate between being a noble reporter and a terrified schmuck. I can’t blame him for either reaction.

That’s because he’s on the trail of a murderer known as the Moon Killer. The police have called in Doctor Xavier, a local and well known psychologist to investigate his latest killing: a scrub woman on the street. Every murder occurs under the full moon, and each victim shows marks that chunks of the victim may have been eaten.

The cops have an ulterior motive to Xavier’s presence, and that’s because they believe that one of the research scientists working beneath him may be the murderer. He has a hardy group of men with all sorts of morbid history; one is a castaway survivor whose shipmate mysteriously disappeared, another studies the effect of moon rays on peoples’ minds and seems a little too into it, one is disabled but sure can walk fine when he needs to, and one has even written an entire book on cannibalism. Add in that Dr. Xavier has been feeling tired lately and acting strange, and it’s not hard to imagine that his research laboratory was staffed in hopes of creating perhaps the most suspicious group of people ever.

Xavier convinces the police to give him 48 hours to uncover the murderer himself using a convoluted scientific process that requires reenacting the murders and measuring the excitement present in the other scientists. Since the art deco labs with their sharp lines and copious lighting are a little too formal, he adjourns with the scientists to his creepy secret-passage filled mansion on the cliffs of Long Island. I mean, there he has a room that is just filled with skeletons, and he can’t let that go to waste.

Xavier also brings his daughter, Joanne, and his servants, one of who I’m certain was named Igor. Intrepid reporter Taylor trails close behind.

Shenanigans abound. Taylor is hit with some knockout gas while eavesdropping. One of the scientists is murdered during the first experiment when the lights go out. Shadowy figures watch Joanne while she lays at the beach. And a hideous monster keeps lurking in the shadows…

Despite Doctor Xavier’s house of intricate scientific tomfoolery, in the end it’s good old fashioned quick thinking that saves the day. Taylor’s final fight with the monster, which includes a pitch that he learned from his youth, is the final blow to the film’s anti-scientific slant, where everyone’s dedication to study and learning blinds them to the effects that their rigorous methods will yield. Case in point: when you lock everyone in handcuffs and leave your beautiful daughter on a gurney, maybe you should be a bit more cautious in regards to the man with the only set of keys.

The film’s a comedy for most of its running time, but that melts away for the most part as the last act reveals the criminal mastermind. We’re treated to a lengthy sequence showing how the villain transforms himself by means of ‘synthetic flesh’, which he hauntingly repeats as he rubs goo over his face. Director Michael Curtiz delves into dreamlike imagery for this sequence, and lets the killer’s body modification glow in unearthly oranges and with horrifying delight. The sequence has been called ‘Cronnenberg-esque’ by many, and its hard to deny that the film sees scientific attempts to modify and supplement the body as the path to a new, grotesque species of madmen.

Don’t be fooled, though, for about 60 minutes of the film’s 77 minute run time, this film is a rather dark tinged comedy. Lee Tracy’s pratfalls, double takes, and backbiting witticisms are on full display. However, there’s one thing that really endears me to this, that I haven’t seen in a lot of other Lee Tracy films I’ve checked out: his character of Taylor frequently gets unnerved and embarrassed.

Frankly, that measure of vulnerability in Tracy is a godsend in a picture like this, where men are often shown to be fearless and women objects to be terrorized.

And on that latter point, well, Fay Wray as the female romantic lead isn’t given any sort of courageous features, though, honestly, in her situation during the climax, I would have been too terrified to move an inch as well. Wray’s Joanne has a very serious Electra complex, idolizing her father and worrying about him constantly. That Taylor is able to wedge himself in there at the very end by sheer bravado is another point for the film’s faith in the common man over the scientist whose plans did nothing but get people killed.

Doctor X’s unique look comes by way of two-strip Technicolor, a process that uses reds and greens to define images. Since it’s lacking other colors from its pallet, the movie takes on an unearthly tone, enhancing the film’s slightly surreal mood. It works to great effect as Curtiz still uses techniques to enhance shadows, but also splits the colors so that they can emphasize one piece of the frame over another. Though not as sharp as black and white, the look is undeniably haunting.

Doctor X is a nice haunted house attraction, even if it isn’t as deep or moody as the movies Universal was pumping out around the same time. The film’s great look and good performances make this a surreal but fun murder mystery.

In your normal old dark house flick, a group of people gathers at some remote, sinister mansion or castle. Some force which can only be supernatural stalks and/or kills them, but the culprit is revealed to be perfectly human before the end credits roll. The cartoon series “Scooby-Doo, Where Are You?” would later appropriate the format for its own, more comical purposes. In Doctor X, a group of people gather in a remote, sinister mansion, but they assume that the force that stalks them must be completely natural — after all, this is the real world. It is only at the end that the killer is revealed to be something more bizarre than just human.

What really gives the film (produced independently but distributed by Warner) its unique tarnish is an early, two-strip Technicolor process, which envelops the action in a sea of queasy algae-green, as if the universe around the narrative’s secret ritual was stagnant and rotting.