You are Dr. Henry Jekyll. Cocksure, a hero in your field, and a man whose lectures are attended by hordes of eager students. With the rapture of a revival preacher, you’re completely convinced of your ideals: “It’s unscientific not to admit the possibility of anything!”

Your hypothesis? There are two beings within every human: the good part, and the dark, creeping half. With science, this dark part can be exorcised, and man can become pure and good. The darkness will wither and die on its own. 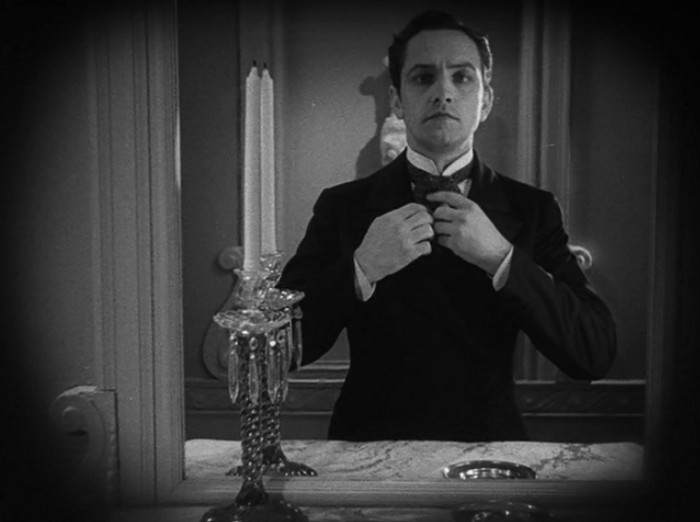 Okay, let’s dial back from the second person narrative before we get into your sadomasochistic impulses and rampant egomania (don’t feign ignorance, I know you too well for that). 1932’s Dr. Jekyll and Mr. Hyde cashes in on two popular trends of the time: Freudian psychology and Dracula-inspired horror trappings. The film’s director, Rouben Mamoulian, does these concepts one better by adding an inspired layer of first-person visuals. He implicates the viewer in each of Mr. Hyde’s increasingly depraved acts, a dark ride where no one leaves with clean hands.

As mentioned above, Henry Jekyll is a rock star scientist, consumed with his own ego. He works long hours in the clinic not out of charity, but as a way to further confirm his own godly delusions. This is to the frustration of Muriel Carew, his fiancée, and even more to the frustration of her father, Brigadier-General Carew. The general isn’t so concerned with Jekyll’s late hours and overt power fantasies but that Jekyll doesn’t have the decency to behave enough like a stuffy upper class gentleman. What no one seems to pick up on is that Jekyll is far more obsessed with being right and better than everyone than being in love; consummating his passion with Muriel is the only thing between him and standing atop Olympus. 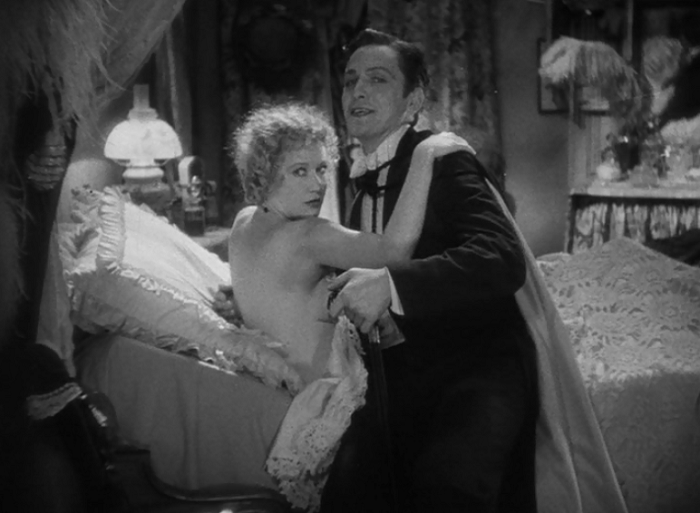 She’s been injured in a fight with a customer— er, boyfriend— and Jekyll agrees to take her back up to her room and examine her bruises. Rather delighted that a man of stature has taken an interest in her, she flirts mercilessly and undresses for further examination. She teasingly tells Jekyll to turn eyes because he’s a gentleman— but he clearly doesn’t. The audience doesn’t get to journey along with Jekyll as he gets an eyeful of all of Ivy’s delicate curves, but, like so many things in life, the implication is much more alluring.

If not for the intervention of his friend and confidant, Dr. Lanyon, Jekyll’s Victorian impulses may have been lost in the chaos. Learning that Muriel still won’t be his for months and is going on a long sea voyage to boot, Jekyll finally snaps. If he can’t make it with a woman, he’ll just have to make it with science.

The brew that he’s been discussing that frees the beast that lurks in the hearts of men does so admirably. The transformation from Jekyll into Hyde contains some of the most impressive “How’d they do that?” special effects of their time, with some work that still looks seamless and impressive today. Crooked, hairy prosthetics turn handsome Fredric March into a half man, half ape with sharp protruding fangs and a brow sourced from times long passed. 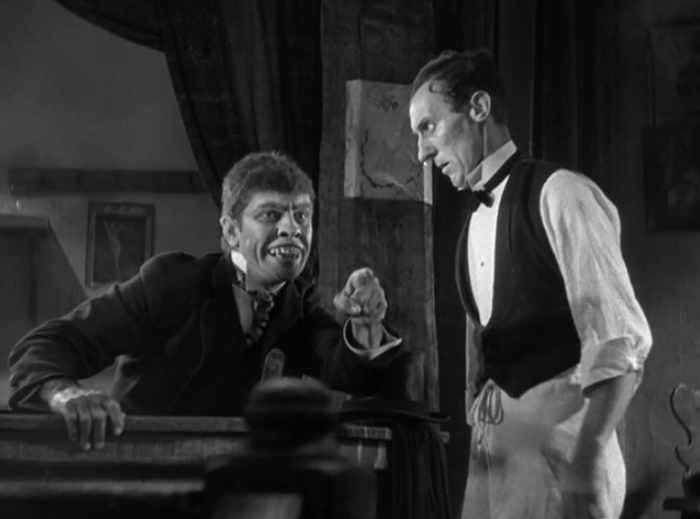 This is Mr. Hyde. You may have heard of him. Besides the simian appearance, his attitudes follow the same path. In a bar full of ruffians, his scares them all into submission; he immediately makes it known that he is the alpha bully, and their job is to fall in line or get hurt. His body language is that of pure primordial aggression, slinking his arms and hissing at those who get in his way.

March really nails both halves of the equation, from Jekyll, who believes himself a holy man who can do no wrong, to Hyde, who cackles in glee listening to the woman he beats sob and beg him for more. He cackles to Ivy who he now keeps locked up in an apartment, “I hurt you because I love you. I want you. What I want, I get.” Freud writ large indeed.

Jekyll feels mild guilt when he returns to normal by way of his potion, but he still feels justified in this escapism until Muriel returns. He’s such a great man, didn’t he deserve to indulge in a bit of naughtiness in the mask of a savage for a fortnight? Unfortunately for him it turns out that the darkness doesn’t go away so easily; Jekyll’s transformations into Hyde start to become involuntary. 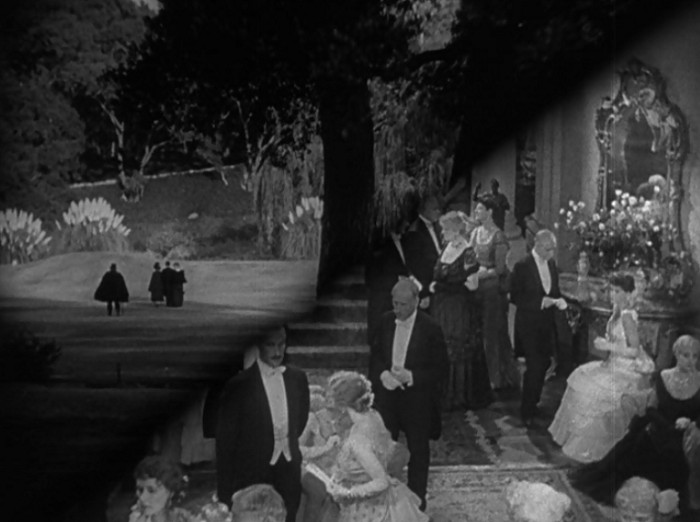 Jekyll and Hyde shows as much as a filmmaker could get away with showing back then, both in terms of violence and sexual content. It’s a product of the “pre-Code” era, a time where film censorship was present but not as heavily enforced as it would later become between 1934 and 1966. The film revels in Paramount’s European-flavored production design, with Mamoulian crafting one of the most atmospherically engaging visions of Victorian-era London put onto film. Taking plenty of cues from The Cabinet of Caligari and other surrealist tinted masterpieces, he makes use of wipes, extreme close-ups and shot composition to symbolize the inner torment these characters are stuck in.

The performances are uniformly excellent. Miriam Hopkins, most often recalled as Lubitsch’s preferred provocateur of the 30s, plays Ivy as a brazen bargirl who goes from fiercely independent to unenviable victim overnight. Her aching desperation endears the audience to a character who normally wouldn’t portrayed with an ounce of sympathy. Rose Hobart as Muriel is excellent as well, giving her longing and desire a palpable sense of eroticism, something needed to drive Jekyll just completely up the wall.

And the film wouldn’t work without Fredric March’s titular performance as the two men. March, who was usually seen as a Paramount, used his charm to both endear and repulse us from Jekyll. And, as Hyde, he’s nearly invisible as an actor. He brings a fascinating charisma to both, creating monsters out of men while still being endearing enough to straddle the line between repulsion and attraction. March won an Academy Award for his performance, a rarity for the horror genre but certainly a well-deserved one. 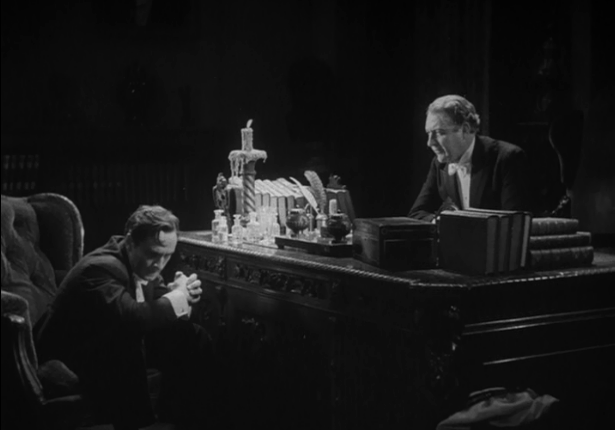 Dr. Jekyll and Mr. Hyde has held up well over the years since the original novel was published, and this screen adaptation remains the most visceral and sumptuous of the adaptations. The story can be interpreted in several different ways, from the deleterious effects of sexual frustration to how society condones depraved lunatics until they cross the line and in many more ways to be sure.

What’s important to remember isn’t how much of an unhinged psychopath Hyde is, but how much of that rampant entitlement comes directly from Jekyll’s character. Hyde isn’t so much a dark mirror as a slight skew—Jekyll is the genius of science, Hyde is the mastermind of depravity. In today’s world, where there’s the person you are online and off, it’s hardly a wonder that the story continues to resonate. 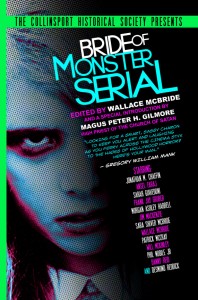 This piece originally appeared in Bride of Monster Serial, a collection of essays about beloved horror movies. Here’s the description:

BRIDE OF MONSTER SERIAL is the inevitable sequel to MONSTER SERIAL, a collection of essays published in 2013 by the award-winning COLLINSPORT HISTORICAL SOCIETY. The second book in the series continues the theme of exploring a love for horror cinema, focusing on both popular and obscure films. It’s an eclectic collection where movies like THE DEVIL’S RAIN sit comfortably alongside films like NIGHT OF THE HUNTER, THE FLY and THE TOXIC AVENGER.

Wallace McBride did a great job assembling the book, and you should definitely check it out!