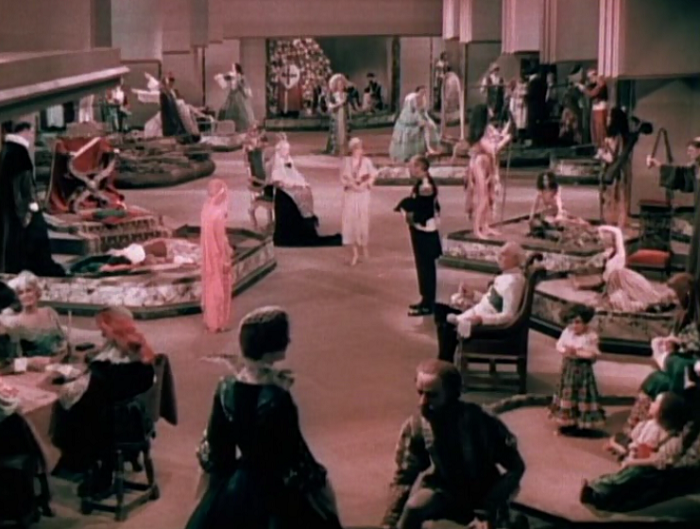 Mystery of the Wax Museum: The Delighted Corpus Delicti

It was around age 11 when I first sat down to watch the 1931 Dracula with my dad. As I watched Dwight Frye stumble about the Gothic castle in near silence, I turned to him and asked, “Did people ever really find this scary?”

Though I was still a pretty impressionable youngster, I think I understood. And certainly anyone who’s reading this now and has watched horror films go from Evil Dead to Saw to Paranormal Activity and somehow back to Evil Dead in the last 30 years, you can see how our culture has internalized horror and how those movies reflect the world around it– Paranormal Activity is heavily linked with the ‘on all the time’ world of social media while Saw definitely fit right in with the ethos of the Bush administration. And Evil Dead, about possession and being forced to turn on those you trust in love in order to survive,  represents a timeless American horror.

But going back, way back, to the 1930s, horror films still struggled to uncover the cultural zeitgeist. The Universal, Paramount, and Warners horror films all looked at how science, the supernatural, and the darkest parts of the world intersected. Frankenstein’s monster and the villain at the core of Doctor X (the other famous pre-Code two-strip technicolor horror film) were both man-made, the extension of immoral science that asked ‘how’ rather than ‘why’. But these criticisms, often leveled at elitist scientists, were also indirectly nodding at the 1920s elites who promised a great future and found the nation’s livelihood was a creature beyond their control– horrifying and destructive.

Mystery of the Wax Museum differs from the usual 30s horror film because its central theme isn’t scientific progress but artistic fulfillment. Ivan Igor, renowned sculptor, begins the film about to be honored by the British government for his masterful works of art. By the end of it, he becomes an obsessed monster, too grotesque to fit in his own collection or the rest of humanity at large.

Reconciling emotional needs with realistic liabilities is a big theme in the movie. Igor’s ‘Goofus’, relocating to New York after an arsonist fire by a insurance-happy partner leaves his museum wrecked and his body crippled. He finds himself up against an unlikely ‘Gallant’: snappy girl reporter Florence Dempsey.

Florence’s ambition isn’t to be the Michelangelo of wax, though. She’s one of those dames whose heart has been around so much that it’s become calloused. And while she’s a driven amateur detective in her own right, she also can’t be bothered with sentimentality. She wants what she wants: if it ain’t a scoop, then it’s a rich hubby who can get her away from the grind.

Her roommate, Charlotte, disagrees with this pessimistic take on romance. Charlotte is content with living on love if nothing else. It helps that she’s young and beautiful, though that will soon get her into a fair share of trouble.

Her fiance, Ralph, works as one of the sculptors at Igor’s new New York museum. His rates must be extremely paltry considering he’s the only one there not in on a creepy murder racket, and he must be doubly desperate since his boss doesn’t really like the work he produces. Igor tells him, “It’s a cruel irony that those of you without souls should have hands”, which is safe to say not positive feedback. I would imagine poor Ralph had to write off all hopes of a raise at that point.

Florence, when she’s not bickering with her editor over being drunk and not writing (two constants many journalists must deal with in their careers), has been tipped off to an exciting mystery: a string of mysterious suicides, followed shortly by theft of the resulting corpse. Florence works with the police to try and unravel it, but finds more success scoping out the town’s new wax museum and comparing a few of its centerpieces to the visages of the suicide victims.

Notably, the other humans-come-wax-figures were all pretty revolting people before Igor made them into his creations– a corrupt judge and a narcotics loving socialite became Voltaire and Joan of Arc respectively. However, this pattern is about to change when he catches sight of Charlotte, a woman who looks like his idealization of Marie Antoinette. Charlotte puts him in awe.

Most of the film’s wax statues– save for the ones that catch fire and melt– are portrayed by actors with some makeup and a thousand yard stare. It reaches for that uncanny valley between what we in the audience see as human and what’s obviously not. This could draw you out of the picture a bit, but I like to think it’s a nice bit of underlining by the director, Micahel Curtiz, to remind you of the gruesome mummification the dead have undergone, and how Igor’s twisted dream has made these victims unwillingly immortal.

Curtiz’s vision of New York City is barely more flattering than his view of the Gothic castles of Doctor X. While that film leaned towards dark greens of rot and large, overly ornate rooms, Wax Museum shows a world clearly divided by social strata. The clean but busy newspaper office contrasts with the confetti covered streets. Lower, beneath the city’s ground, we see musty basements full of odd angles and looming shadows.

Lower than that we get Igor’s laboratory, a horror of industrialization penetrating into the earth beneath the modernist and bland museum itself. The room he uses to create his sculptures is filled with steel columns and haphazard gangways, with the entire enterprise resembling a metallic spider surrounding a boiling pit of unearthly flesh-colored wax.

Wax Museum errs less towards green and more towards that flesh color, where both the mummified victims and the humans share the same unmistakeable shade of life. The city itself adopts the color on occasion as well, making the whole town radiate with the sense that it is a living, breathing, and horrific monster surrounding them.

The film meanders a bit between the edges, languishing in the central mystery which the movie itself solves in its opening minutes. The biggest problem is that, again, the horror was considered so terrifying for the 30s that the movie has been spiced up with liberal amounts of comedy. While I’m not one to turn down a wisecrack from Glenda Farrell any day of the week, it grows tedious as she and the rich playboy she’s wrangled into helping her out fumble through Igor’s silent labyrinth.

The problem here is that Florence, because of her gender, can’t save the day at the end. Upon seeing Charlotte in the clutches of Igor, who strips her down and prepares to entomb her in wax, Florence turns around and runs away screaming. Charlotte’s salvation comes from Ralph and the New York City police who show uncannily in the nick of time.

Mind you, Florence does learn the film’s lesson: she can’t be that pie in the sky dreamer who takes what she wants over what she needs. She ditches the playboy and agrees to marry her combative editor instead. It’s no His Girl Friday, but serves as another Warner Brothers affirmation to the value of hard work over decadence– almost painfully on the nose.

Besides the strange but fascinating look of the film, Farrell is fun to watch, but better in the similar role of Torchy Blaine (another fast talking reporter) a few years later. Fay Wray gets a few screams and Lionel Atwill gets to chew some scenery again, but both are wasted and I don’t think I’ve ever seen Frank McHugh look so uncomfortable.

Nowadays it’s pretty unlikely that Mystery of the Wax Museum will scare anyone, or even pique the curiosity to anyone unfamiliar with the craftsmanship at work. It’s too bad, but nowadays, like a wax figure, it seems stiffer with age.

The commendable sets of Anton Grot put these characters in a Gothic, art-deco world that is contemporary New York seen through the eyes of a madman. We are shown a city that looks sinister and awe-inspiring at every glance and a museum full of shadows and intrigue that perfectly complement the horrific elements of the story. The grimly beautiful cityscapes and sets help to pull us into the story and the world where it exists — just as Igor pulls Charlotte into his own demented world as the story unfolds.

In Mystery of the Wax Museum, Igor longs to duplicate human beings through what are essentially wax mummies. He doesn’t just want to make wax figures that resemble people—he needs those figures to be existentially bonded to the people they represent, molded around their bodies, like a death mask. And, to paraphrase the great French critic André Bazin, what is film if not another kind of embalmment? The cinema is 24 death masks per second.

10 Replies to “The Mystery of the Wax Museum (1933) Review, with Glenda Farrell, Fay Wray, and Lionel Atwill”