The Bully: The Ol’ One-Two

Flip the Frog is a footnote in the cartoon industry. Like Bosko or Betty Boop’s many sidekicks, you probably have to have had a serious side education in early cartoons to know his name. MGM, looking to cash in on the massive popularity of Mickey Mouse, created Flip. To further their ambitions, they snagged Ub Iwerks, Mickey’s creator, from Disney and put him to work on the series.

It’s a mixed bag, unsurprisingly, as many early cartoon series are when they’re usually hurrying a time-intensive process to meet a certain window. “The Bully”, the 22nd Flip short, probably wouldn’t have felt much different with Mickey or Bosko as the main character. That may have been the point, but its generic nature doesn’t help it stand out too much. 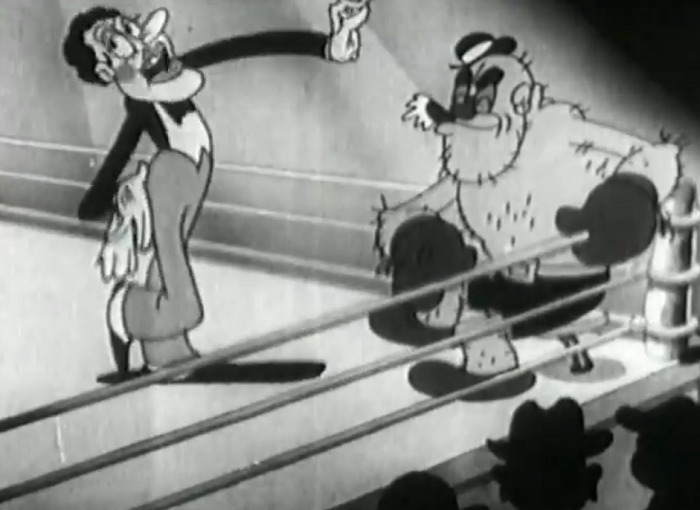 One notable moment: the announcer, clearly wearing rouge and talking in a high pitched voice. Why? I dunno.

The plot is pretty threadbare: Flip protects his friend from the titular bully, a big tough guy with a battleship on his chest. A boxing promoter catches their scuffle and throws them into the ring to duke it out in front of a paying audience. Flip doesn’t do too well– he gets punched so hard he splits into three at one point, and, at one point, in what can be said to be unsportsmanlike conduct, Flip eventually resorts to pummeling the bully with a bat. Things look bleak for the frog until a blow knocks him out of the stratosphere and, miraculously, he manages to land right back on the bully in time to claim victory.

The animation looks good, but there’s not much else to say about The Bully. I thought the ship tattoo animation was cute. I like ships. Ships are pretty.

Most Flip cartoons are hit-and-miss. I far prefer “Rum Runners.”

Good to know, I’ll keep that in mind!