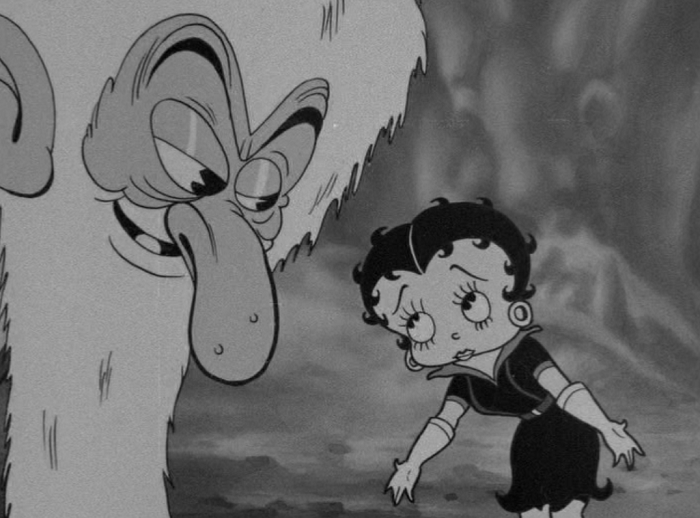 Old Man of the Mountain: On Top of Old Fogey

Cab Calloway’s third appearance in a Betty Boop cartoon sees him as a white haired, white skinned crazy magic mountain hermit pervert– you know, that old cliches. Calloway’s Old Man has the town below terrified, so much so that the squirrel is packing up its nuts and the lion is roller skating away as fast as he can on a pair of rabbits.

Betty Boop, being proactive in an especially rare fashion, heads up the mountain to confront the old man. There she finds him to be a great dancer and even kind of cute until he starts chasing after her, slobbering.

Moreso than the other Boop shorts I’ve reviewed so far, “Old Man of the Mountain” is pretty much all about just how bad everyone wants to fuck Betty Boop. Several men stop what they’re doing to leer (sometimes to the detriment of their angry fish wives), the Old Man spends the second half trying to molest Betty, and she even loses her clothes at one point. Betty Boop is a sex object, and you’re given almost as much as Fleischer and company can give here to underline her carefully penciled lustiness.

The short has a couple of amusing moments with many incongruous animal routines, and the song by Calloway is pretty fun and flighty. He gets another rotoscoped toe tapping routine, which I really enjoyed– but I’m one of those weird people who really enjoys rotoscoping. There’s really no hope for me.