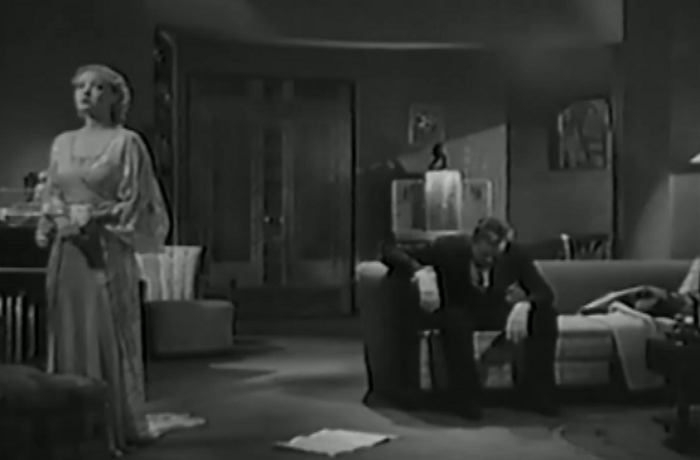 “That laugh just cost you your neck.”

State’s Attorney is about all the problems that come from being talented and not having any idea what to do with it. Tom Cardigan (John Barrymore) is infinitely charming in law and discourse, knowing how to play a jury like a one stringed banjo. But he’s frustrated because he has no idea where to focus his abilities. Getting the criminals off– innocent or not– is a fun little game, but there has to be some deeper meaning at play. Tom is desperate to find a cause.

So he searches for it. The most obvious place is at the bottom of a bottle, a place that gives him more courage and less introspection. It also helps him deal with how he aids mob boss and former convict-in-arms Vanny Powers (William Boyd) and his criminal empire. “Does a grocer ask who pays his bills?” he muses ruefully, between drinks.

Things change when he meets June Perry (Helen Twelvetrees) one evening. She’s been arrested for tapping on a window when a man walked by; it was an open offer that a stool pigeon saw as another opportunity to cozy up to the police. Cardigan, drunk and surly, decimates in him a few minutes. He also manages to take June home with him, where she asks him what he wants to eat for breakfast the next day.

Over the course of a few years, Tom’s position changes. He goes to work for the D.A. office when they decide that working with him is better than working against him. A well-publicized murder trial sees him grabbing the headlines and the job at the head of the office. Unfortunately, June isn’t the right girl to have by his side as rumors of the governorship swirl; that’ll be Lillian (Jill Esmond), the current governor’s daughter and an adventurous dame who finds Cardigan sending a woman to the gallows electrifying. “I could go for him in a big way,” she purrs to her father and, uh, boyfriend.

Two decisions put Tom’s life in a choke hold. He marries Lillian, but can’t bring himself to consummate the marriage. He tries to apologize to June and reconcile, but she senses that his pleas are just as dishonest as his courtroom performances. To make things worse, Tom spurns Vanny’s bribes after Vanny guns down a would-be assassin which June unfortunately witnesses. The murder trial threatens to bring all sorts of skeletons out of the closet, putting Tom in the position to choose to either protect the woman he still loves or convict a murderer at the threat of losing his own career.

There are many pleasures to be found in State’s Attorney for sure, with director George Archainbaud bringing a classy but light touch to a movie that straddles both drama and comedy. Twelvetrees is a standout as June, a woman who’s been through the ringer but sees her love of Tom as a way to redeem both him and herself. She pities him, she pushes him, and she’s always bracingly honest, thinking his power plays to be unnecessary and only making things worse.

Barrymore, too, is masterful here, exerting both charm and playfulness while never letting go of the tortured soul beneath the bravado. The film’s trial scenes are a blast, and the movie knows it’s just fun watching an expert orator like Tom go to town. One highlight is his questioning of accused murderess Nora Dean where he rhythmically taps the iron that was used to bludgeon her husband on the frame of the bed that they shared. He knows when to switch tactics, but, more importantly, he knows when to keep pushing, even tiptoeing around objections in order to find a new way to tighten the screws. Barrymore is perfection in these scenes, playing an actor just as talented as himself but torn between duty, ambition, and frustration.

But my favorite relationship in the movie has to be that between Tom and Vanny, the gangster who made and plans to break Tom. They went to reform school together, and Vanny delights in using Tom’s skills for evil. Their friendship is set up like so many leading men and exasperated sidekicks, only Vanny has bite. He’s not just a schlub, but a mob boss. After a hit is attempted on him, he gets his revenge on the hitman on a lonely street at night. He kills the man with one shot, and then shoots him seven more times just for kicks, all while laughing maniacally. Dude knows what he likes to do. He’s such a rat, and knows which screws to turn on Tom to make their interactions crackle.

State’s Attorney is a stylish and assured entry in to the early lawyer picture genre. It paints the mob as cruel and merciless, and the halls of political power filled with nepotism and greed. No one is wholly good in the movie save for June, a wry angel who plays the voice of reason to a man who’s desires always seem to push him in exactly the wrong direction. It’s a solid little film, with Barrymore at his most verbose and charming best.

The Variety review commented that the participation of writer Gene Fowler in the production suggested that the story was based on the life of the late New York criminal lawyer, William J. Fallon. A former assistant district attorney, Fallon, whose nickname was “Broadway’s Cicero,” died in 1927 of liver failure after winning an acquittal for himself on a bribery charge. According to Gene Fowler’s biography of Fallon, The Great Mouthpiece (New York, 1931), Fallon defended 126 homicide actions without a conviction and saved more than fifty persons from execution. Fallon was also the unacknowledged subject of Warner Bros.’ 1932 film The Mouthpiece, which beat RKO’s film to the box office by a week . Variety contended that RKO “deliberately proceeded to confuse this association [with Fallon] by making hanging the capital punishment which, geographically at least, removes the locale from New York and suggests the state of Illinois more.”

It seems as if there were a lot of movies in the 1930s about men with alcohol problems – I wonder if this maybe had something to do with the Depression, as a dramatic way of expressing the despair which many people watching the movies would have felt in their own lives. I suppose it also serves partly to counter-balance the glamour of a world like the legal profession or Hollywood – Barrymore’s character, Tom Cardigan, might have a grand apartment (and a butler, a touch which seems a bit unlikely to me), but his table is littered with half-empty bottles and overflowing ashtrays, showing the hopeless mess of his personal life. Women reluctantly working as prostitutes, as heroine June does in this film, is also something which often happens in pre-Codes and again points up the desperation of many people in the Depression. Of course, the sleazy underworld of bars and vice seen in these pre-Codes also has a self-destructive glamour of its own.