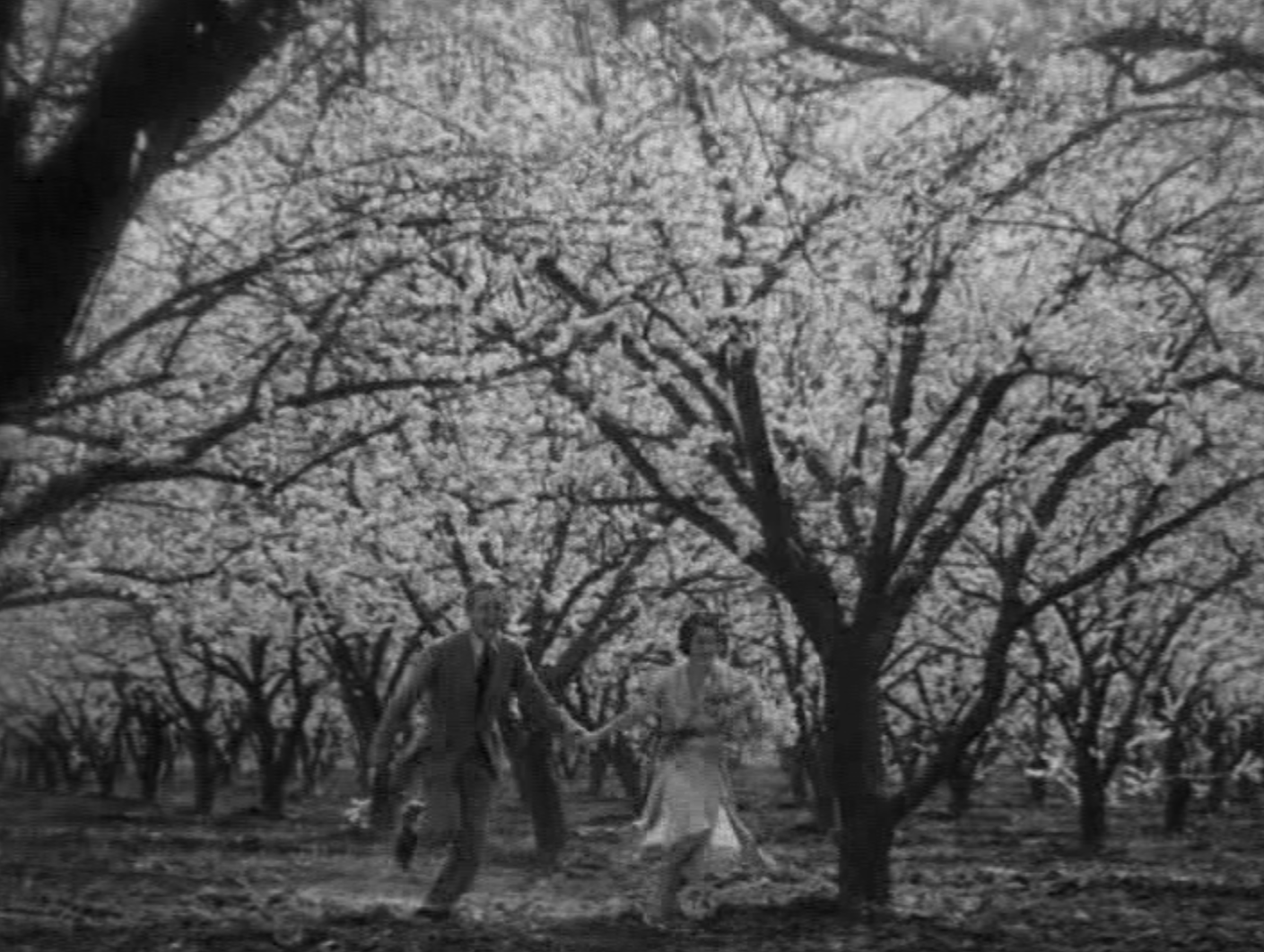 “To kill happiness is a worse crime than taking a life.”

Following the evolution of sound through motion pictures is fascinating. Just like learning about crosscutting, fades, super impositions, and dozens of other visual editing techniques that were perfected in the decades of silent film, sound suffered its own evolution, not just in ability but in appropriateness. When does a voiceover work? When should background music be used– and at what volume/style/etc? The notion of sound attached to moving images is so ingrained in every modern viewer, it’s almost impossible to appreciate the steps and missteps involved, especially since its major growing pains were done in less than half a decade.

Strange Interlude is an interesting footnote in that history, an attempt to convert Eugene O’Neill’s clunky 4-hour play about infidelity and complicated personal lives into a sleek, star-studded two hour version. The play had an interesting gimmick: actors would break out of the scene and turn to the audience and express what they’re really thinking or feeling before snapping back into the drama. This could happen rapidly or rarely depending on the scene. For its filmic adaptation, director Robert Z. Leonard and the film’s writers decided to simply translate the characters’ feelings into voice overs, played while each actor is trying to conceal their thoughts under a silent veneer.

Does the gimmick work? In a word, no. The main issue with it is that cinema isn’t the theater– and the actors assembled are good enough to physically convey about 75% of the emotions expressed in asides without needing the breaks from the scene to reinforce it. It messes up the rhythm.

In the stage play, these asides are directed right at the audience, and the film does this as well but only once– the opening narration by Charlie sees him stare into the camera, and, for a brief second, it clicks perfectly. But the rest of the film we’re stuck watching actors forced to break their emotional beats up into long pauses, which is completely different than how pretty much anyone watches movies.

The constant narration breaks create a deadening sense of redundancy, and worse: it makes a chunk of the movie unintentionally funny, only magnified by its lavish devotion to the source material. Check out this meticulously stilted dialogue for example:

“Yes, he’s gone. My father who began me. He’s ended. Oh, don’t be frightened, Charlie. I’ve suddenly seen the lies in the sound’s cold words. Say lie, Charlie. Lie. Now say life. Life. You see, life is just one long drawn out lie. With a sniffing sigh at the end.”

As much as I love Norma Shearer, no one could sell that sparkling piece of whatever it is.

The repetition of emotions from both physical reactions and the asides often gives the movie the feeling that instead of brave innovation, the filmmakers are just afraid that the audience is too simple to understand nuance. But when the film drops the gimmick for long periods of time or at least occasionally utilizes it well (maybe it would have just worked better with a desperate Charlie simply narrating), things do take off.

The story follows a group of four people– I hesitate to call them friends– over the strange, sad course of their lives. Nina (Norma Shearer) loses the man she loves in the first World War. They never married or consummated their relationship because her father interfered, filling her with an eternal guilt. She’s also constantly pursued by her neighbor, Charlie (Ralph Morgan), a writer and eternal mama’s boy too meek to approach Nina but adamant she’ll someday come to him. She decides to become a nurse to help the war wounded, but trouble arises when she’s found spending time with the soldiers in ways that nurses do more often in the 1978 Night Nurse than in the 1931 Night Nurse, if you get my drift.

Her co-worker and personal doctor, Dr. Ned Darrell (Clark Gable), sees one solution to stop her from sleeping around and to fix the melancholy she feels after her father’s passing: she must marry kind, innocent Sam (Alexander Kirkland). This solution, though unconventional (especially since Nina and Darrell share sublimated sexual feelings), seems like a fair plan until Sam’s mother (May Robson) reveals a history of insanity in the family. If Nina has Sam’s child, the child rearing process will drive him mad and risk that her future child will also be a complete loon. But if she doesn’t provide Sam with a child, he may just go nuts anyway.

There’s only one solution to this: Nina must have a kid, but it can’t be Sam’s. The best stud for this is Ned Darrell, but, unsurprisingly, you can never truly have scientific, non-emotional sex, and especially not with Clark Gable in 1932. The sex only confirms Nina and Ned’s passion for each other, but neither have the courage to confront Sam as neither wants to risk driving him insane. The years pass and their love remains a source of deep frustration as the group (including the ever persistent Charlie) grow rich and old. Nina’s son, Gordon (Tad Alexander and eventually Robert Young), grows up to loathe Ned and the way he looks at Nina, while Sam’s waistline grows and his greed deepens.

Strange Interlude lampoons the glorification of wealth and romantic love. Sam has a perfectly wonderful life with a wife who loves him and good friends at his side, as well as money, wealth, and a beautiful, smart son. Of course, this is all deceit: he never knows that his wife doesn’t love him, his friends resent him, and his son isn’t his own. That neither he nor Gordon ever discover this deception is the film’s button hook of irony. The actors in Sam’s life played their parts perfectly, and gave him all he wanted in spite of their own feelings and considerations, constantly manipulating each other into more and more precarious positions until they had no choices but to live shallow, empty lies. But there’s also more to it than that.

The central emotional deceit of the movie doesn’t come from the tragic romance between Nina and Ned, but from from the rift that that creates between the two and their son, Gordon. He resents (and, in a Freudian sense, is probably quite jealous of) Ned and Nina’s relationship, and this drives a deep wedge between them. Gordon grows up idolizing his “father”, the greedy and buffoonish Sam, leaving him to lose his drive to be great and instead simply seeking to be one of the crowd, much the horror of his real parents.

The best and most emotional scenes are Ned and Nina dealing with this. Ned, because he can’t claim the child as his own and must suffer Gordon’s scorn, grows into a broken shell of a man. Gable, who’s usually known more for his sexual charisma than his acting ability, makes these scenes truly heart breaking. It helps that the film’s makeup effects are quite good (this is also apparently the first on-screen appearance of Gable’s mustache), making his transformation both visually and emotionally damaging.

Shearer is great, so much so that it’s hard to notice. She has to walk the fine line between sexual desire (not surprising for a pre-Code Shearer performance), motherly pride and hope, and a deep seated frustration of a life that she constantly feels was stolen from her. She can be catty and cruel, and the veneer of a long, painful life finally breaks when she meets Gordon’s fiance, Madeline (Maureen O’Sullivan). It’s a confirmation of her own mortality and the final nail in the coffin of her ever hoping to influence Gordon to take on a challenge and do good in the world rather than idly soak it up. These scenes of cagey desperation as Nina tries to manipulate the situation, including a final revelation of the truth, are handled beautifully.

In fact, the film’s moribund finale is its highlight, as all of the gears the characters have ground for decades finally give out and they’re only left with a hollow feeling of satisfaction, not from a life well-lived, but in the knowledge that they’ve done good for everyone but themselves.

The narration is supposed to create a connection to the audience, allowing us ‘in’ on the private thoughts and motivations of the film’s characters, but it fails since it the actors aren’t allowed to reach through visually as well as audibly. Unfortunately, the way its been stripped down, nothing in the plot really needs the explaining. The gimmick frustrates rather than enhances.

You’ll probably notice, in spite of my complaining, I gave this one a like, because I do honestly find much of the film works in spite of the awkward voice overs. Shearer and Gable, as always, have sublime chemistry, and the story is wonderfully melancholy despite how hackneyed the setup. I always appreciate a movie that tries something different and ambitious and fails colorfully, and Strange Interlude is undeniably that in spades.

Strange Interlude (1932) was a commercially risky venture, the story of neurotic Nina Leeds, whose first love is killed in World War I. She copes with her grief by marrying, but her husband’s impotence drives her into the arms of a doctor, and she bears his child. The play ran nearly five hours on the stage, following the life of Nina from age 18 into her sixties. The screenwriters were forced to compress the mammoth work into a 110-minute film. O’Neill used an unusual device to express the characters’ inner thoughts – he had them pause mid-scene, and speak their thoughts in asides to the audience. It may have worked onstage, but it would never work onscreen. In the film version, the characters’ thoughts were spoken in voiceover, and the actors’ faces were supposed to telegraph their thoughts. However, the film was made only a few years after the end of the silent era, and many of the actors used silent film acting techniques to telegraph emotions – a method that was already looking dated then, and even more so today.

Still, there are compensations – and surprises. Shearer threw herself into the role, working intensely to catch every nuance of her character’s feelings. For one simple scene where she greets her lover in front of her husband, director Leonard was satisfied after the second take. Not Norma – she asked for twenty additional takes before she felt she’d gotten it. The reviews she received were among her best.

Clark doesn’t have a lot to do other than pine for Norma and look like a wounded puppy. He is wearing far too much makeup right from the beginning and as the story goes on, he is supposed to age. This is indicated at first by the presence of a pencil thin mustache–the very first mustache Clark had onscreen, although it was a fake one!–and then later as he is made up to look like Colonel Sanders with fluffy white eyebrows and drawn-on wrinkles. Clark didn’t really age well, but at least he didn’t age like that!

I watched Strange Interlude so you don’t have to.

Harsh words for a glossy, high-end 1932 MGM movie, perhaps, but the experimentation in Strange Interlude not only doesn’t work, it makes for a downright unpleasant movie watching experience.