The Strange Love of Molly Louvain (1932) Review, with Ann Dvorak and Lee Tracy

“Think it over. And make it snappy. But remember this, lollipop– he’s your chance.”

The Strange Love of Molly Louvain is one of those movies that reminds you that ain’t easy to be a woman, especially one whom everyone expects the worst of. Molly is the girl at the cigarette counter in an Iowa hotel who manages to land a rich guy at long last. She also struggles with her past and the mother who abandoned her:

“I want to be different than her. Decent. Everything people think I can’t be.”

Unfortunately, rich boy immediately dumps her when it becomes convenient and before he finds out that he knocked her up. Left to the wolves, she picks charming scoundrel Nicky over dull Jimmy and goes on a life of wounded carefree countenance. Three years go by before she snaps out of it, turning to taxi dancing and giving her child up to a loving foster mother before getting stuck in an incident involving Nicky killing a cop and Louvain being fingered for part of the blame. 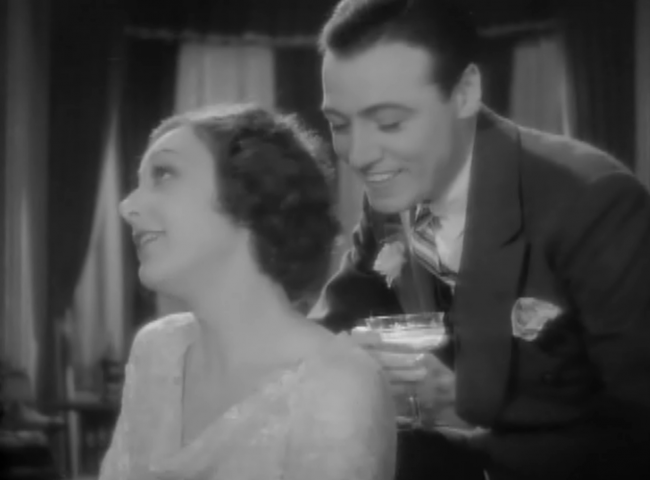 A third of the way in and the film finally kicks on as Jimmy and Molly hide out in a crummy boarding house. Across the hall is intrepid journalist/wiseacre Scotty Cornell, a lout who mostly cons other people into picking up his bills and strives to figure out his place in the world. One option is to run away to Paris, another is to head to Hollywood– he’ll pick one. Whichever means getting the most money for the least work, of course.

Someone needs to show me how to do this with a cell phone.

The first chunk of the movie is a romantic tragedy in slow motion as the well-intentioned Molly just makes bad decision after bad decision. While it’s easy to see why she’d shack up with a slimeball like Nicky, it’s kind of like a watching someone get kicked when they’re down. Jimmy reappears after a jump, and the movie seems headed for a straight shooter happy ending before Tracy pops in, essentially picking up the picture and shaking it to life.

The titular ‘strange love’ is Louvain’s growing desire to run off with Scotty rather than Jimmy. As previously noted, Scotty is a jerk, but at least he’s honest about it. Jimmy plays that coveted bonehead role where his romantic infatuation overwhelms his common sense. All well and good in a lesser picture, but Molly Louvain presents a world of graft, manipulation and cruelty– Jimmy’s not a noble man doing the right thing, but just a sucker who hasn’t figured out the game yet. Scotty knows the angles, and while he may not be a ‘happy ever after’ kind of guy, he’ll bring Molly joy when he can and give her what she wants– sex with passion and love without the pedestal. 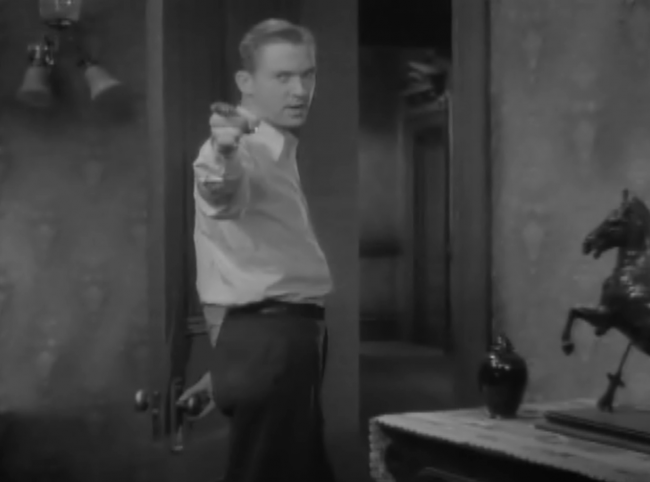 That’s what love is in the Depression, after all. While Jimmy has money and a future as a doctor under his belt, Scotty has his own grit and toughness– he can and will survive whatever is thrown at him. To the 1930s audience, this ‘love’ Molly has may not have seemed so strange– except the scandalous detail where marriage wasn’t set to enter the equation.

Unsurprising for a Warner Brothers flick, the film is absolutely awash in immorality, with the entire system tilted against Molly and her lower class friends. The chief of police and Scotty are more than happy to use a mother’s instinct to care for and protect her young daughter to ensnare a woman who, as far as they know, is at best an accomplice to a crime.

There’s also a nice detail I love in that the reporters who are hunting down Louvain are far more concerned with stealing the police captain’s cigars and answering the phone before he manages to reach it than actually helping or taking their own initiative. This Marxian brand of anarchy in the face of the ultra serious (and ultimately completely wrong) police force is a welcome relief and a nice portrayal of the fourth estate as not an army of organized crusaders beating back government overreach, but as a band of lunatics who keep the poor public servants on their toes. 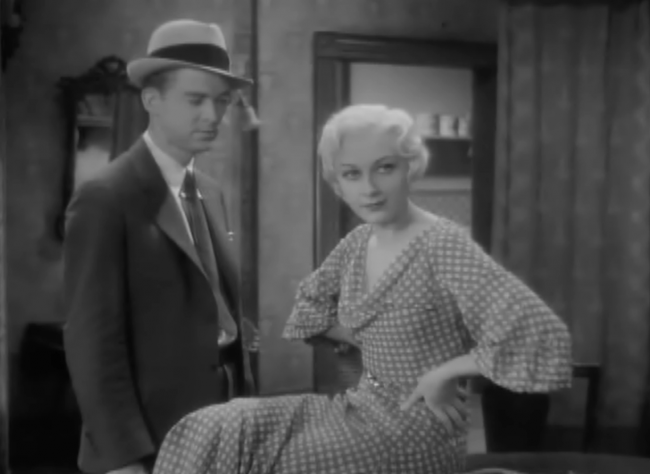 Lee Tracy, who is more often than not referred to as ‘a force of nature’ by film critics both then and now, is fantastic in the film, pulling off a number of speeches I almost wanted to applaud. He’s not completely cut loose as he is in Blessed Event, but here he’s honest with both himself and his friends. His character is worldly and carefree in ways that movies usually shy away from, making his character both repulsive but likeable, paralleling Molly’s attempts to right her life make her endearing despite the fact that she’s fine running away whenever trouble knocks on the door.

Ann Dvorak has the unfortunate task of trying to keep pace with Tracy, and, like him, relies on her best assets to keep the audience’s interest. It isn’t a motormouth delivery, though, but her big, expressive eyes that carry her along. Director Michael Curtiz gives Dvorak plenty of silent closeups where we’re allowed to soak in the feelings of terror and frustration that Louvain is enduring, which are really only undercut by the sheer enormity of the number of scenes of Dvorak shimmying in and out of lingerie. Oh, and Dvorak suffers through a bad dye job for the second half of the movie that is definitely one of those things that probably sounded like a better idea on paper.

But as one of Dvorak’s only starring roles, the talent on display is obvious. Her deep, striking voice and big eyes are riveting, and she has a sense of hard luck built into her. It’s too bad that The Strange Love of Molly Louvain remains only a glimpse of her talent rather than the beginning of something great.

The Production Code Administration had some objections to the amount of skin visible in Ann’s disrobing scenes early in the film, and cautioned against some of the double entendres in the exchanges between Dvorak and Tracy, but overall The Strange Love of Molly Louvain seems to have reached the theaters with only minimal cuts. For a photo shoot to promote the film, studio photographer Elmer Fryer posed Ann in a skimpy dress with a champagne glass that may have been full of the real stuff. The resulting images are striking , with Ann appearing more seductive and uninhibited than she would in any other photos taken during the course of her career. The photos from this session, in which Ann looks more than a bit tipsy, are the embodiment of the pre-Code female. 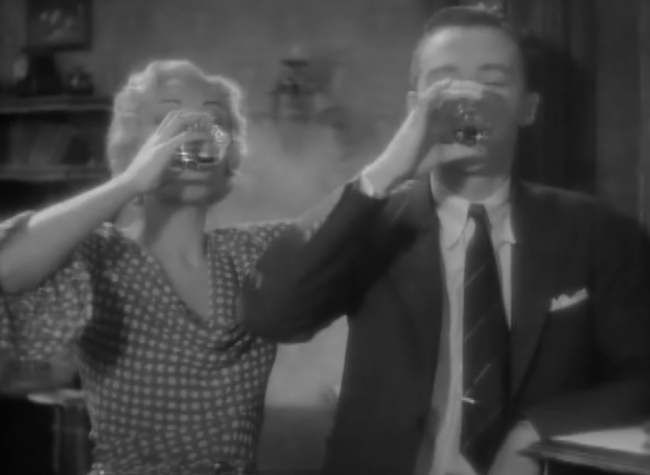 In 1932, a vivid actress with soulful eyes and a cello voice exploded onto movie screens as a gangster’s tragic sister in Scarface. It was one of eight films featuring Ann Dvorak that year, including her first leading role for Warner Bros., The Strange Love of Molly Louvain. […]

Based on a play, Tinsel Girl, by Maurine Dallas Watkins, who wrote the 1927 Broadway hit Chicago (1927), the second half of The Strange Love of Molly Louvain shares Chicago’s cynicism about crime, criminals, and the press that is at odds with the romantic melodrama of the early part of the film. In his first Warner Bros. movie, Lee Tracy plays what would become the quintessential Tracy character: a brash, cynical, fast-talking, wisecracking reporter — or public relations man, or anything to do with what was in those days called “ballyhoo”. He makes a jaunty entrance, in robe and pajamas, sliding into the boarding house room where Molly is hiding out, answering the phone and having a staccato conversation in his Bugs Bunny voice. 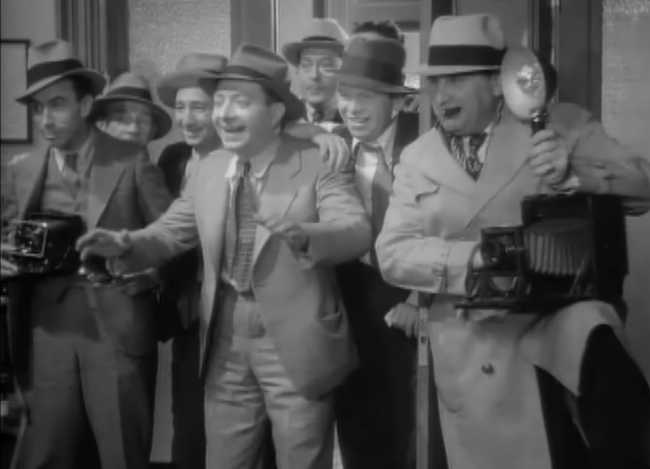 McHugh breaks out his unusual laugh at the very end to great effect.

When the film plays the mother love card, it descends straight into weepy territory, the power of which overcomes even Scotty’s detachment. Will Molly, set to face prison for a crime she never knew was happening, find freedom and happiness with Scotty and Ann Marie? My greatest hope was that she’d lose that awful dye job!

All that can be said in favor of “The Strange Love of Molly Louvain,” the film now at the Warners’ Strand, is that it has a cast of twenty players and that several of them strive hard to make their scenes diverting. But, with due respect for the zealous efforts of Lee Tracy and Ann Dvorak, this film is both wearying and unsavory.

Gotta love a good Ann Dvorak pre-code.  She gives it her all in Molly Louvain and makes a movie with an average story one worth seeing.

Fun write-up. Well done! You’ve sold me on trying to track this one down for a viewing at some point.

Hope you enjoy it!

I found it on Youtube in a collection called “Nostalgic Films”

Hi Danny. Great review, as always. I’ve been thinking about the opening scene (she’s just been crying) and I think the implication is that she’s just told him she’s pregnant. The rich boyfriend then tells his mother and that’s why the mother whisks him away to Europe. It’s cleverly done because you don’t know until several scenes later that she’s pregnant, but I think it’s all there in Dvorak’s reaction when she shows up at the mansion house. What do you think?