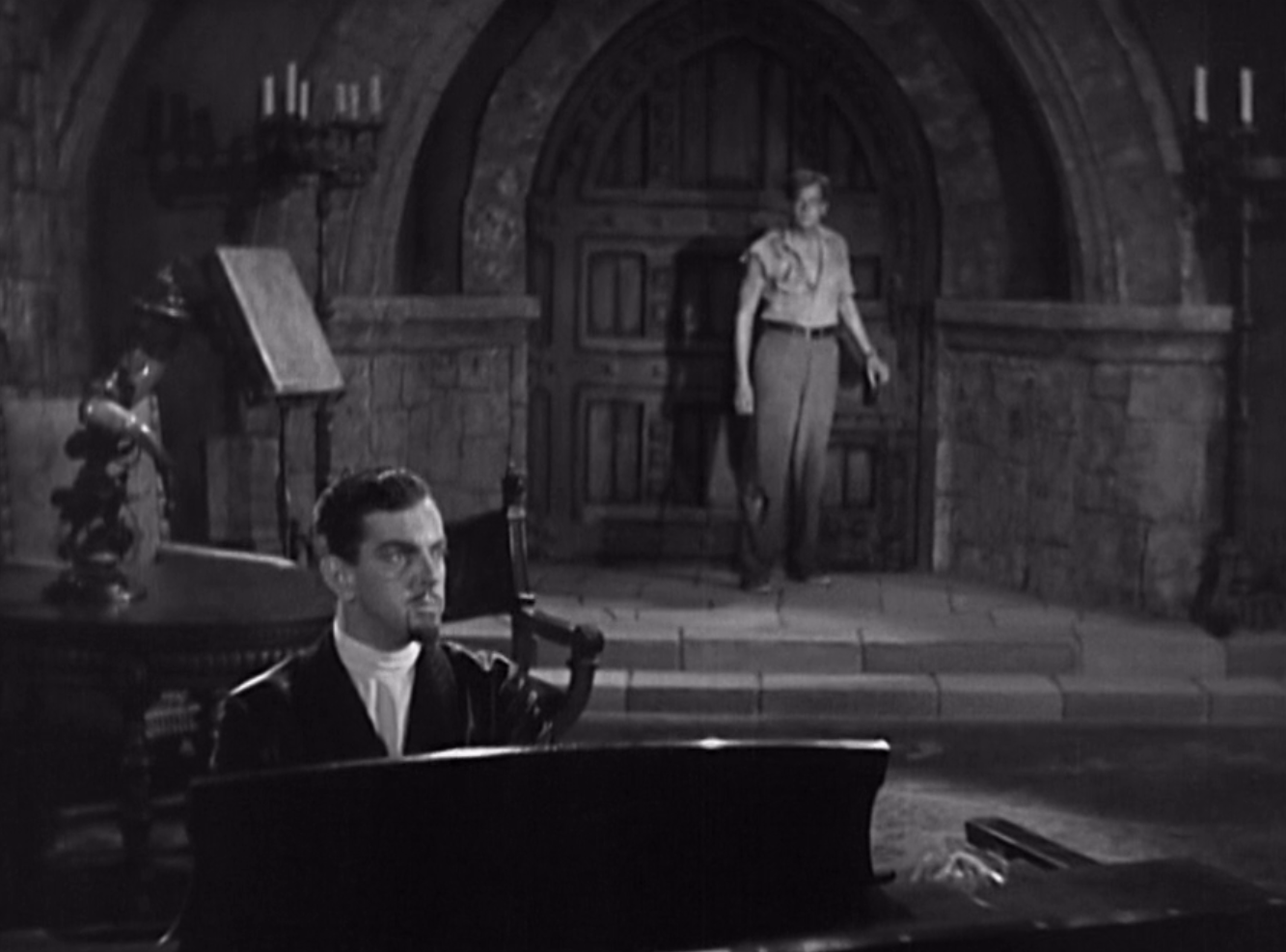 The Most Dangerous Game: A Wild Ride

“This world is divided into two kinds of people: the hunter, and the hunted.”

Goddamn, this movie is fun. RKO’s The Most Dangerous Game, came out during a brief creative zenith at the studio. David O. Selznick and Marian C. Cooper helmed some of the studio’s splashiest and most daring projects, from Little Women to King Kong. This one is a bit more of a lark, but that’s just because it’s a tight little action thriller that’s about as precisely engineered as any given roller coaster.

Bob (Joel McCrea) is a big game hunter who jovially tells his friends how happy he is that he’s never been the prey when the irony gods swoop in and wreck his ship. He’s the only survivor and discovers on the nearby island a massive, foreboding fortress. He finds a second pair of castaways, brother and sister Martin (Robert Armstrong) and Eve (Wray). Martin is a drunk, but Eve’s picked up the nasty intentions of their host, the hunter Zaroff (Banks) who has a habit of massaging the scar that snakes down his face whenever he gets a little too excited. And he’s got a thing for excitement.

The Most Dangerous Game is obviously one of the most famous (and most “in the public domain”) works of Western literature– hell, I know I read it in high school. There have been dozens of adaptations and reworkings of it on radio as well as big screens and small, all of vastly varying quality. But this 1932 version may have the most going for it.

First is the distinct lack of frills– it’s a fairly straightforward version of the story, with an added tinge of sex thrown in. And I do mean sex here– Zaroff’s philosophy of infatuation is best articulated when his eyes gloss over and he declares: “The blood is quickened by the kill. One passion builds upon another. Kill, then love! When you have known that, you have known ecstasy.” Eve’s eyes affect a much less glossy texture here as it becomes clear that she is a different kind of quarry for Zaroff.

Second is the bluntness of the dialogue. It’s not exactly poetry, but it’s pulpy and quick. As Bob begins to let his guard down to Zaroff during their first meeting, Eve butts in and carefully dances across the word danger with the utmost care. It’s so silly that it would take a nut not to notice, but Zaroff is so into himself he can barely see past the scar on his face. The moral question that Bob and Zaroff battle over– whether man should be hunted– is also bluntly and crudely dissected. Zaroff scoffs at Bob’s anger at the situation, hissing that Bob is, “One who does not follow their convictions to their logical conclusion.” The contention between the men is where the line of sport lies. Bob had already expressed his respect for the tiger he’d hunted– one wonders at the end if he managed to find any similar respect for Zaroff when all was said and done.

Last, the visual elegance of the picture is simply stunning. The creepy moors, the gothic fortress, and every detail down to the creepy knocker on Zaroff’s front door of a wounded monster preparing to make its way with a maiden layer the film. RKO was one of the most lavish studios at the time, and not a moment of this film seems confined to a set. The outdoors are expansive and filled with pitfalls, and the interiors likewise ooze atmosphere.

The acting is all fine. McCrea’s hunter, despite being the good guy, definitely sees no conflict in defending himself; a climactic fight sees him break a man’s back before he stabs another. He’s polite and good natured, and a little dense to be sure, but McCrea’s physicality and gee-shucks attitude works in harmony with his more ruthless instincts. Fay Wray, while certainly the objectified prize in this game, has some fun early on as the only person to pick up that something sinister is going on in this remote island fortress ruled by a crazy man who keeps massaging his scar while people are disappearing. And Leslie Banks’ Zaroff rivals Charles Laughton’s Moreau in Island of Lost Souls for sheer masochism. It’s a tightly controlled but enjoyably over the top performance– just crazy enough to be real.

There’s probably more I can squeeze out of this movie, but it’s one of those that probably doesn’t require much of a review in the first place. It’s a fun, compact thrill ride that doesn’t feel like it’s aged a day since release.

Click to enlarge. Feel free to reuse with credit!

It was also made before the Code was enforced so the film doesn’t flinch from depicting Zaroff as a sexual deviant whose bloodlust is aroused by the hunt. Nor does it ignore the more sadistic aspects of the story including one grotesque scene showcasing Zaroff’s trophy room complete with human heads mounted on the wall and floating in water filled tanks. According to IMDB, “The trophy room scenes were originally much longer: there were more heads in jars. But there was also an emaciated sailor, stuffed and mounted next to a tree where he was impaled by Zaroff’s arrow, and another full-body figure stuffed, with the bodies of two of the hunting dogs mounted in a death grip.”

Such an opening could not fail to hook the men who would soon create King Kong (1933), Merian C. Cooper and Ernest B. Schoedsack. Like Kong’s Carl Denham, these were men who would go to the ends of the earth to get a picture. They already had—in 1924, when with Marguerite E. Harrison they joined a migrating tribe to film one of the greatest silent documentaries, Grass (1925), the record of their hazardous six-week trek across the mountains of Iran. Even when they shifted to narrative films, Cooper and Schoedsack were led by the documentary impulse, shooting much of the footage for Chang (1927) in the jungles of Thailand. Geographically and cinematically, they were explorers.

Cooper, a pilot in the First World War, and Schoedsack, a news cameraman, were known for their reckless bravery. They met after the war, and within a few years were off on an expedition to film the farthest wonders of the earth. Often working as joint producers-directors, or with Cooper as producer and Schoedsack as director, they also worked together on The Four Feathers (1929), The Son of Kong (1933), Mighty Joe Young (1949), and—in collaboration with many others—the grand documentary This Is Cinerama (1952). If they caricatured themselves in the character of Denham, they also gave him the commercial savvy to realize that no matter how exotic the location and how dreadful the legend (as in Chang and Kong), there had to be “a girl in the picture.” What is debated in King Kong is taken for granted in the film they made right before it, an outright adventure film with no reflexive plot about making movies, The Most Dangerous Game (1932). Without thinking twice, they put a girl in the picture. And how.

I’ve read The Most Dangerous Game interpreted along homoerotic lines, what with Zaroff appealing to Rainsford to share in his perverse utopia. From this remove in time we’re more likely to wonder why Rainsford doesn’t simply pretend to join Zaroff’s Happy Hunting Club and then double-cross him at the first opportunity. Bob and Eve are released into the jungle wearing the clothes on their backs, while Zaroff appears suddenly wearing an all-black hunting getup. It’s not quite a kinky cat suit, but the effect is the same — the ‘real’ Zaroff is now out in the open, wearing his Freak Costume. […]

Does Zaroff play fair? The movie is critical of hunters, to be sure. By extension, it makes killing animals for sport seem all the more cruel and cowardly. Rainsford is let loose in an unfamiliar setting with only a knife, while Zaroff has his hunting bow and his servants as aides. When he can’t catch Rainsford, he switches to a high-powered rifle and looses a pack of hunting hounds. Despite Zaroff’s Chess-game talk about hunting a resourceful, thinking opponent, he didn’t really lay down any specific rules. Rainsford is reduced to little more than human prey.

In terms of film horror, The Most Dangerous Game is an almost pure expression of filmic sadism. Zaroff maintains a torture chamber for opponents that won’t play his game, and his secret trophy room is decorated with the decapitated heads of his victims. The two ghastly examples we see are more than adequate to push the movie into horror territory. We’re told (through the researches of the late George Turner) that the trophy room scene was originally much longer. Zaroff displays for his captives a couple of waxwork-like dioramas of earlier victims, telling the stories behind their horrible deaths. Deleted before release, this lost footage has joined the legendary Kong Spider Pit Scene in the dream imaginations of fans of movie horror. 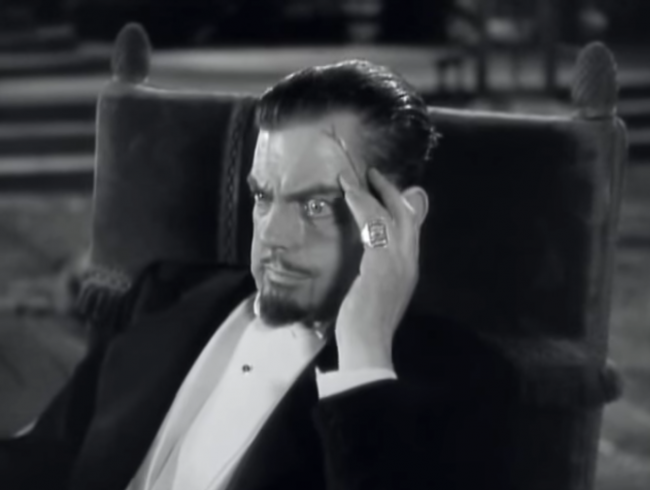 The best horror monsters for my taste are the ones you could easily imagine living next door, and Zaroff is one of the best of that type. He’s said to sleep all day and hunt all night, like a vampire, but he’s really one of Hannibal Lecter’s relatives: refined, cultured, multi-talented, highly intelligent, even friendly and fair toward the adversary he respects. This sophistication is what makes it so terribly juvenile and disturbing the couple times he repeats McCrea’s sentences back in a mocking tone, and it reveals early on how unstable he is. Banks’ lopsided face was the result of paralysis from a real WW1 injury. The camera focuses on the “nice” side when it’s the Count, and on the scarred, drooping side when it’s the villainous hunter of men, frozen in wide-eyed maniacal trance and stroking his scar.

5 Replies to “The Most Dangerous Game (1932) Review, with Joel McCrea and Fay Wray”