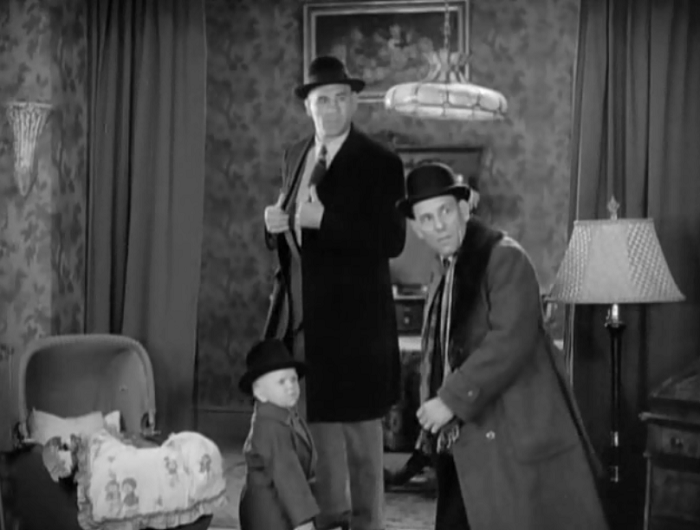 I will admit that I’m pretty sad that this is the only Lon Chaney movie I’ll ever get to cover for this site. Cheney, famous as the silent film’s ‘Man of 1,000 Faces’, only managed to make one sound film before succumbing to cancer in 1930.

The Unholy Trio is the result, a remake of a 1925 film also starring Chaney. The film’s a black comedy about a ventriloquist, a midget, and a strongman disguising themselves as pet store owners who then rob their wealthy clients. If that only seems a little crazy, the film goes an extra mile and has the trio disguise themselves as a loving family, with the ventriloquist as the grandmother and the midget as a precocious baby.

The three begin the movie in a sideshow. The ventriloquist is Professor Echo (Chaney), a sly huckster who delights in deceiving ‘the boobs’ out in the audience. The carnival is closed when Tweedledee (Earles) picks a fight with a mouthy child, and so the trio hatch their complicated scheme. Adding some spice to the matters is the beautiful pickpocket Rosie (Lee), who Echo desires but who falls for fall guy pet store employee Hector (Nugent).

The Unholy Three manages to get a lot of mileage from its goofy premise, creating a lot of humor between Echo’s transvestism, Hector’s cluelessness, and Tweedledee’s general psychopathy. That isn’t to say that the film turns into a sitcom, though, as it plays with an undercurrent of horror as well, with the titular trio committing their crimes with a predatory, smirking glee.

Taking a look at these four outsiders, including Rosie, and it’s interesting to see how the film transforms the character’s from their sideshow origins. As they leave the sideshow and enter society, Rosie, the least odd of the group, becomes ‘normal’ the quickest. Her love of Hector’s general dopiness (and, dear god, he’s dopey) makes her realize that the scams that they’re pulling are needlessly cruel. Echo’s love of Rosie slowly transform him as well, and he eventually develops a conscience about what he’s doing. Outsiders, no matter how cruel or manipulative, can become normalized by love.

Unfortunately for Tweedledee and Hercules, they’re the outliers, both physically and morally. Rather than becoming civilized, they eagerly buy into their own cruel impulses, murdering when it suits them and eager to steal more and more. Both are eventually destroyed by becoming too wholly barbaric, which may or may not be ultimately symbolized by a giant murderous gorilla.

For a 1930 film, it’s almost technically flawless. The characters talk at a good clip lacking those dreaded pauses of films of that year, and while the movie rarely looks special, it lacks that claustrophobic feel that many of the films of the time were trapped in. The only real problematic area is that the sound equipment isn’t advanced enough to make Harry Earles’ squeaky voice comprehensible. I’m actually kind of okay with that too since it makes him seem like even more of an inhuman monster.

But none of this would make much of a difference without Chaney’s bravura performance, transforming his voice and his performance into a variety of ridiculous characters. It’s a performance still full of silent film ticks, but the man has such unabashed charisma and an absolutely commanding intensity. Professor Echo’s has a smile at the end of the film as he relates his credo to Rosie– “That’s all there is to life. A little laugh. A little tears.”– serves well a reminder of a man who so thoroughly captured the public’s imagination. The Unholy Three remains the perfect swan song for him.