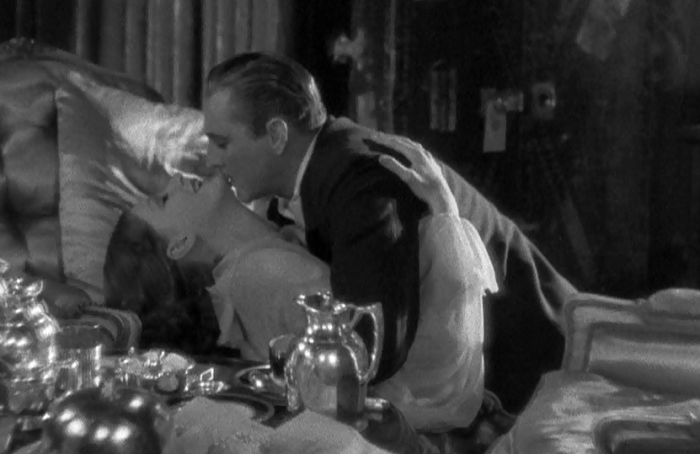 “I don’t suppose you’d take some… dictation from me sometime.”

Grand Hotel: More Stars Than There Are in the Heavens

‘Don’t put more than two stars in a movie,’ was the conventional wisdom at the movie studios in the 1930’s. You can only use two stars for the production to be cost effective.

Irving Thalberg, MGM’s Head of Production, thought it was time to buck that trend when the script for Grand Hotel came across his desk. For it, he gathered some of the biggest stars that MGM had in its stable and some of its best behind-the-scenes talent and let loose. There are no small parts here, as this tale is the closest to pure distilled MGM glamor as anyone could assemble.

Set in the most expensive four star hotel in Berlin, the film opens with a series of phone calls that give us an idea of the plots we’ll be juggling. With five major characters in five separate hotel rooms all in a row, each has their own endgame for extracting some measure of happiness from their stays.

First is Kringelein (Lionel Barrymore), an older man who’s spent most of his life slaving away in a textile factory. Upon discovering that his death appears to be eminent, he cashes in his funds in order to spend the rest of his days in the lap of luxury. He’s neurotic to a ‘T’, though, obsessed with getting the most out of life even though it’s obvious he has no idea how.

For this he turns to The Baron (John Barrymore), a smooth player who knows how to talk to the ladies and wrack up the gambling debts. He’s generous and kind to a fault, but he hides a dark secret: he’s one of those charming gentlemen thieves you hate to love. The only way to repay his debts is by robbing a beautiful pearl necklace from an overemotional ballerina a few doors over.

This happens to be Grusinskaya (Greta Garbo), an older dancer who is beginning to have her panic attacks affect her performances. The venues she plays at in Berlin aren’t selling out either, only complicating her worries. After she accidentally catches the Baron in her room attempting a robbery, he brightens her mood and they quickly fall in love.

This puts off the other woman that the Baron was flirting with, a stenographer named Flaemmchen (Joan Crawford). She’s also of a sad sort, working for pennies and picking up spare money as an artist’s model. Flaemmchen is desperate to escape her situation, and, after the Baron falls in a legit form of love, she resigns herself to prostitution.

Not the cheap on the street kind, though. An industrialist visiting Berlin, Preysing (Wallace Beery), is desperately trying to negotiate a merger to save his textile company from ruin. He prides himself on his honesty, but may have to sacrifice that for his future’s sake, and his wife’s as well. Preysing promises Flaemmchen riches for her body, and she seems to see this as an inevitability. He also used to be Kringelein’s boss, and is temperamental as hell.

There are two other minor characters to round things out. Doctor Otternschlag serves as the film’s laconic disbeliever, who treats his life like a burden. Half of his face is burned in a horrible scar after an accident during the war, and thus works at the hotel as a way to hide a way from real life and pretend that it ended with the war. There’s also the lead porter, Senf (Jean Hersholt), who spends much of the film anguishing over the fate of his pregnant wife. I’ll talk about both of them a bit more below.

There are many little relationships throughout the film, but the most enchanting is watching Lionel and John Barrymore bounce off each other. While the two play fast friends, there’s enough brotherly love that slips through that give those scenes an extra spark.

Joan Crawford, who I’ve noted before took a while to warm up to talkies, is wonderful here, imbuing her part with a mix of sadness and hope that the movie isn’t strong enough to get a handle on. Since this is such a big picture, a lot of the more unseemly implications of her later decisions apparently ended on the cutting room floor; in spite of that, Crawford shines.

That being said, Greta Garbo offers less to look at. Mick LaSalle once wrote that it’s impossible to appreciate Garbo unless you see her in a theater, in which case her aura becomes majestic. Since the odds of that happening this day and age seem slim, Garbo nowadays feels less like one of the great stars of Hollywood and more like Carole Lombard with a stiff accent. Her part is certainly one of the more heartbreaking in the film, and her chemistry with John Barrymore helps quite a bit. But without him, the surly routine just drags.

And, yes, this is the movie where she famously croons to a cadre of handlers, “I want to be alone.” Or, “I vant to be alone.” It’s iconic because of Garbo’s famous recalcitrance, and not so much of anything else to do with the movie. I mention this because it almost seems legally necessary since that single line has probably outlived the memory of this film.

Wallace Beery probably has the most thankless role since he’s probably the least well-remembered of the principals. Preysing walks a fine line between desperation and hedonism, and evokes sympathy even though his temper and egotism make him into an easily definable monster. Beery’s accent is ludicrous, though, which doesn’t help.

Reading different reviews online, I found it interesting that no two seemed to agree on which actor succeeded, nor even which actor is the weak link. Some hated Lionel, others thought he was the audience’s point of sympathy. Beery was either overacting or the main attraction. Others fell in love with Garbo, and others were delighted by Crawford.

John Barrymore was the only actor with whom all to agree upon, and the reason seems to obvious. Despite the fact that Kringelein is the noveau rich in this opulent place or that Flaemmchen has the more tragic story going on, neither engage with the audience’s sense of morality or fair play like Barrymore’s Baron.

I’m going to discuss spoilers here for a bit. Skip down below to where it says (Spoilers are finished) if you want to remain clean.

The Baron is the film’s conscious, the everyman in dire financial straits whose sudden discovery of love instantly reforms him. He is the enforcer of good, and his eventual demise at the hands of the villain is meaningless rather than redemptive. It spurs on Krigelein and Flaemmchen to come together, but even that isn’t a joyous connection.

The characters are all fairly reflective of German opulence of the time, and it’s easy to see that each could stand for a different strata of society. Kringelein is the lonely, despondent older generation, who has seen his way of life erode away. Flaemmchen is the young, newer generation who have no choice but to sell themselves to achieve security. They will eventually use each other for solace, but it’s a flimsy thing born out of desperation and kindness. Eventually (and possibly soon) Kringelein will die, and Flaemmchen will be left again at the mercy of the streets.

Preysing, meanwhile, is easily corrupted and prone to violence and sadism; his murder of virtual everyman John Barrymore isn’t just tragic because of the connections it ends, but because it represents the rich snuffing out those simply trying to get by honorably. It’s a common theme in Pre-Code, and touches on Depression Era anxieties that a capitalist society is weighted severely against the little guy.

That takes me to my next conclusion, that the hotel can be taken to represent life itself. The Doctor famously observes at the beginning, “People coming, people going. Nothing ever happens,” which run parallel to our place in the universe. We check in, we stay, a bit, and then we depart for the unknown. It’s a bit scary and sad, and the Doctor’s job there speaks to how much the Doctor simply refuses to participate in the world he inhabits.

The ending gives a few characters what they wanted, but not in the way they wanted it. Krigelein’s loneliness is satiated, but only by a person doing it out of sympathy rather than love. Flaemmchen also gets what she wants, but not with who she wants it. Grusinskaya gets to live in her delusions a bit longer, and Preysing’s cheating will soon destroy all that he’s built.

Even the Baron, whose body is carried out the back, gets one final indignity. The hotel, wishing to immediately separate itself from a customer who turns out to have been a thief, has his beloved pet dachshund dragged out of the lobby, with a sweeper accidentally smacking it on the rear on its way out. It’s almost literally sweeping the Baron’s stay under the rug.

But the final twist comes in the final few minutes, as Sanf finally receives word that his wife is fine and he is a proud new father. The hotel will soon have a new resident, but, like all hotel residents, he will only stay for a little while.

Director Edmund Goulding is incredibly playful with his staging. The film noticeably contains an extended tracking shot, moving between different people as they come up to talk to the receptionists in the luxurious lobby. This is followed by our trip up to the sixth floor, where the balcony serves as a stage for the actors to play around in front of.

Goulding trusts his star wattage to let him be more adventurous with his staging than most of his contemporaries, with several sequences having actors with their back to the camera, or having parallel movements between two different plots occur.

The soundtrack is a wide variety of waltzes, and the cinematography is unbelievably crisp. The hotel itself is an art deco masterpiece of set design, so much so I’ve seen several comments online asking where they can visit it at!

Grand Hotel suffers from its own lumpiness, sometimes zipping and other times simply milling about. While the film is filled with great actors, it’s hard to shake the feeling that you’re not watching a movie but a series of moments of these people simply acting at one another. It’s big and luxurious, but empty and safe. It influenced a lot of movies that came after it, but is barely remembered today.

AKA the ideal Best Picture Winner.

But it should be stated that in one scene he permits an extremely gruesome idea to creep in. This will probably be eliminated at some of the future exhibitions.