“You ain’t heard nothing yet!”

Warner Brothers was a Poverty Row studio in 1926. Despite being one of the earliest advocates of sound film and having a few of the countries biggest stars under their banner– most notably Rin Tin Tin– the studio was getting licked by the other major studios. Albert, Sam, Harry and Jack decided to double down on their gamble on sound films and their Vitagraph project, producing in 1927 the part-talkie The Jazz Singer starring Al Jolson. The movie was so singularly successful Warner Brothers went from Poverty Row overnight to becoming one of the preeminent studios in the country. Soon they negotiated a takeover of First National, formerly one of the majors who’d been crushing Warners, and their reign atop the major film studios began. 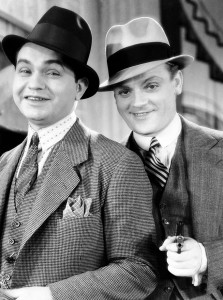 Edward G. Robinson and James Cagney in the only film they starred together in, Smart Money (1931).

With Daryl F. Zanuck as the studio’s production head pushed for more ‘message’ movies that could appeal to the working classes. One notable area where Warners led was with its early foray into gangster pictures, starting with 1930’s Little Caesar. The Public Enemy appeared shortly thereafter, and solidified the studio’s tough guy, fast talking attitude. Other social message movies included I Am a Fugitive From a Chain Gang, The Mayor of Hell, Wild Boys of the Road, and Heroes for Sale.

The musical trend that Warners kicked off with The Jazz Singer peaked by 1930, with the major studios releasing so many musicals that it inspired a major backlash, including protests and theater closures. The number of musicals decreased dramatically during the next few years with the genre pretty much considered box office poison until Warners gave nascent Broadway director Busby Berkeley free reign on a series of backstage tales of hoofers that were matched with some of the most over-the-top visuals of the era. One of these movies, The Gold Diggers of 1933, is probably the easiest to label as the quintessential film of Warners of this era, mixing social commentary, saucy innuendo, scandalous amounts of flesh, and outrageous production numbers into a perfect blend of humor and drama. 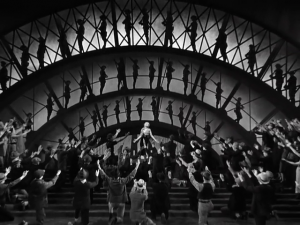 Warner’s output were also among the racier offerings of the period as their ‘films for the common man’ mantra led to them pushing the bar in terms of both political output and risque material. Several Warners films are often cited for their influence in bringing in the Production Code crackdown, including (but certainly not limited to) Baby Face and Convention City.

The end of the pre-Code era was a major shift for Warner Brothers as it necessitated a complete revamp of their output. Now forced from doing films with too much salacious or political context, their studio stables were reorganized and they began to focus more on biographies and action pictures– with Errol Flynn becoming one of the studios biggest stars in 1935.

Warners, of course, survived the end of the pre-Code era, and have turned out movies over the years like Casablanca while becoming one of the largest media conglomerates in the world. But the studio is still proud of its past, and, thankfully, Warner’s great films remain available for new generations to discover.