The Betty Boop cartoons that Dave Fleischer put out are kind of a weird rarity. Besides the occasional Jewish in-joke originating from its director, they often showcased African-American singers and acts who were rarely given the star treatment opportunities that their white counterparts were. Big acts like Cab Calloway put his music into the Boop shorts, giving them a Jazz Age afterglow that’s hard to resist. Another popular black artist of the 1930s was Louis Armstrong, and he gets his chance to shine in “I’ll Be Glad When You’re Dead, You Rascal You.”

The short opens with a shot of Armstrong and his orchestra, and he really does have that charisma that he’s known so well for. So much so that Fleischer can’t help but insert Armstrong into the short at several other points, including one briefly surreal bit where Louis Armstrong’s disembodied head chases Bimbo and Koko around, singing and laughing maniacally. 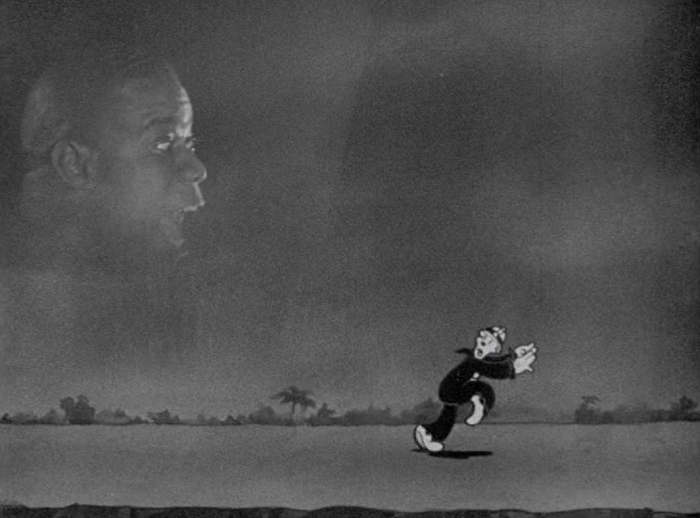 It’s an impressive animation trick to be sure, and puts Fleischer’s loopy animation sensibilities to the test. (To wit, Armstrong’s head first scares Koko out of his clothes and, just for effect, out of his underwear as well. You don’t get much implied clown nudity in pre-Code Hollywood, but, by god, we get it here.)

Speaking of pre-Code, the song that Armstrong sings is about a man chasing down another man who cheated on him with his wife. Koko also lets out a string of mumbled curses so powerful that it instantly fades him and Bimbo into a cauldron being prepared by this cartoon’s adversarial native caricatures. 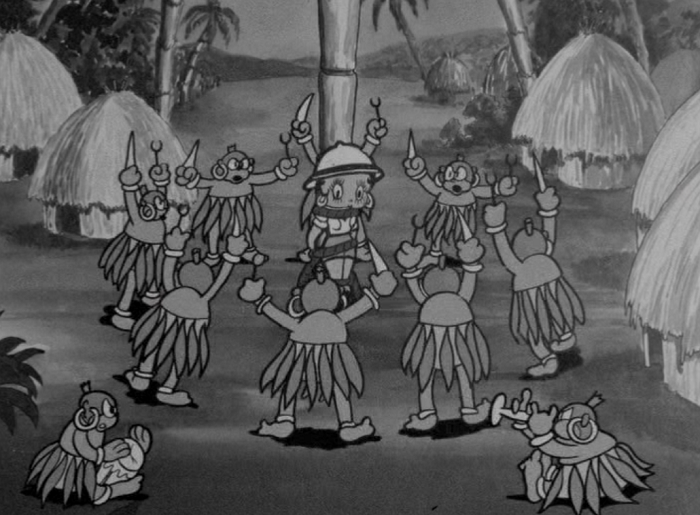 As you can imagine from 1930s Hollywood, this is not the most racially sensitive portrait of African tribesman. In fact, in an effort not to mince words, it’s embarrassing and ugly. Several cutaways between band members and the natives themselves are notably painful, as it seeks to make the line between the band’s obvious civilized manner fuzzy between them and a bunch of minstrel cannibals.

The plot involves Betty getting captured by those cannibals– spending most of the short tied up or running away– while Koko and Bimbo barely get more screen time, most of it spent running. Besides the elaborate work with Armstrong’s portentous floating head and the number itself (which is great, no lies), there’s not much here besides some residual embarrassing racism that is stuck firmly in the Trader Horn era.

Danny, thanks for including this cartoon. When I was a little boy in the 1960’s, I fell in love with the background music on Fleischer cartoons, Warner Bro. and RKO black & white musicals, Jean Harlow, Laurel and Hardy, the list goes on. When I hit my 20’s and 30’s, I had a difficult time putting together what the world was like in the 1930’s versus the entertainment, which in my immature state, thought were two separate things.

As I’ve aged, I now have seen through some of the fog but it all makes me wonder what people will think of us in 80 or 90 years if any of our mixed up “media” survives.

This is one reason I like your blog. I love the “from afar” perspective. The blatant and acceptable racism of the 1930’s in these cartoons (and many films) is not surprising when you think that people in Germany were being “deported” to camps, black people in the USA were being lynched with hardly an ounce of protection and that’s just two examples of some of the misery forced on “outsiders” who really were not outsiders.

I’m sometimes disappointed when I hear that some of the old Warner Bro. cartoons were “re-dubbed” to be less racist. It’s unfortunate because it hides or past mistakes. If you can’t admit your mistakes, you’re going to keep making them. I hope I have not offended anyone. In no way do I enjoy racist cartoons but censorship, even censoring things that go back that far, is a disservice to our history. Watch Warner Bro. cartoon “Bugs Bunny Nips the Nips” if you want to really see anti Japanese media. Sorry if I babbled on, but you pushed a button of mine. Thanks.

Oh no, thank you for sharing. I always kind of struggle with talking about racism and sexism in these old movies because it’s not a monolithic ‘we hate these people and want to belittle them’, it’s just genuine accepted facts of race that wouldn’t become dislodged in Hollywood until the mass genocides of the second World War (and never completely dislodged there and across the country, I’m sad to say). It’s not that they had the best intentions either, by any means, but just that they were lazy in unchallenging widely accepted norms. In some movies, you get a sense of striving for more, and filmmakers like King Vidor and legions of black filmmakers who worked outside the system did their best, but, unfortunate as it is, the movies that were popular and stayed popular are the Gone With the Winds and Swing Times where the worst tendencies of black American portrayals were practically showcased. Homosexuals faced even worse marginalization, practically beneath contempt for a lot of writers and moreso for America at large.

Whenever you watch old movies you have to understand how different the world was — Britain, France and Germany still laid claim to half the world’s landmass, for God’s sake– and that makes it easier to grasp why such shitty views could be so pervasive. It also makes you appreciate how far we’ve come, even if it’s been in fits, and how far we have to go. I don’t really want to know how 2010 media is seen at the turn of the next century. With any luck, it’ll be completely forgotten.

About 25 years ago, I took my then-young son to the UC Theatre (of blessed memory) to see a matinee called “Cartoons that Bop.” This was one of them.

While we enjoyed much of what was offered, I was disturbed by the racism. I should have known that cartoons from the 30s, built around African American musicians, would dip into that sort of unpleasantness.

OTOH, it provided fodder for an important father/son discussion on the walk home.

Very true. It’s a shame that this urge to caricature African Americans in such an ugly light was so damned pervasive back then. I remember having that same discussion with my dad, too, though, and I think that was after Top Hat.

Hi Danny, I love your site! As a 39 year old black woman some may find it strange, that I have such a love for old movies that take such a callous view of minorities in general. We need these movies to show how far society has come on a whole and while I can’t say the racism doesn’t bother me, I still watch and discuss a lot of these with my son. Thanks

Thanks for commenting, Teresa. I appreciate it, and agree with what you say.

One definite Pre-Code moment is the Louis Armstrong “I’ll give you a bottle of Coca Cola, just to play on her vagola” (the last word pronounced like well, you do the math…)