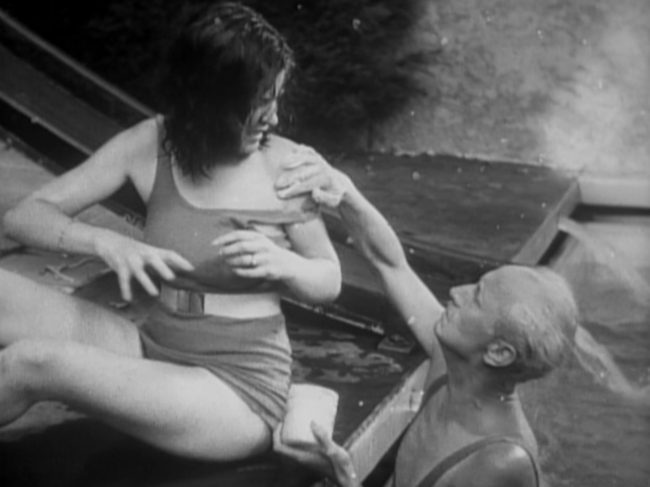 “Nobody loves a riveter but his mother!”

I admire the sartorial choices in The Hot Heiress. I’ve spent the last week trying to find something in tweed that doesn’t cost me an arm and a leg; the sheer style of Ben Lyon’s driving cap nearly sent me into a tizzy.

Thus ends the highest praise I can give The Hot Heiress, a movie’s whose title even annoys me. Who pronounces the ‘H’ in heiress? Just saying The Hot Heiress out loud is all thumbs.

Hap (Lyon) is a riveter, widely detested in the skyscrapers around him. However, his job does come with one benefit– peeping. He ogles a beautiful woman sleeping in the penthouse who turns out to be Juliette (Munson). After accidentally sending a hot bolt through her window and setting her room on fire (Juliette wakes up and immediately passes out when she sees the fire– what a life.), Hap rushes in and saves her life.

This plucky riveter turns out to be exactly what Juliette was missing from her life. She double dates with him and his pal Bill (Tom Dugan) and girlfriend Margie (Inez Courtney). This is much to the consternation of her stuffy parents and other suitor, Clay (a very young Walter Pidgeon).

She then invites them to her parent’s mansion in the country for a swell party weekend. To illustrate the distinct class differences, Hap and his friends immediately throw their trash in a fountain and trip over a chair; those wacky lower class people! Hap and Bill even overhear Pidgeon’s plan to thwart their weekend and make them look bad … and then they immediately fall for it.

A lot of these class-conscious romances end with the lovers adjusting to their new social circumstances; love triumphs, but it’s hard when you’re no longer on mommy or daddy’s allowance. Juliette never seems to acknowledge or reckon with the difference in stations; even though she’s apparently brought home working class men before, she never really cares for the high life and is more than eager to ditch everything for Hap with nary a care. Instead of worrying that the relationship couldn’t last because of differences in temperament, I was worried Juliette would simply continue to follow around Hap like a lost puppy dog the rest of her life.

The Hot Heiress is a musical from 1931, which means the sound is better than many of the early talkies, but it also meant that the audience was practically running out of the theater from exhaustion. It features a trio of forgettable songs from Rodgers and Hart. I’ve linked one below, but they’re really not very good. The opening song about who could love a riveter is broken up and badly paced, sort of a metaphor for the film that follows.

Lyons is fine, though not really a singer, and Munson can smile but conveys no depth. Thelma Todd’s part is almost microscopic, and while Inez Courtney brings a lot of pizazz to her role, she’s backgrounded quite a bit. The jokes here are just tired; more loud complaints than punchlines.

In general, the movie made me grumpy and skeptical. The Hot Heiress isn’t worth bothering with.

Munson certainly had the chops to star in a musical. After an early careerin vaudeville, she had top-lined the Broadway smash No, No Nanette and introduced the song “You’re the Cream in My Coffee.” But at the timeshe was better known for having recently ditched her husband,actor-director Eddie Buzzell, for an affair with director Ernst Lubitsch. Less known was her private predilection for amorous encounters with other women; she would number Marlene Dietrich, Alla Nazimova, the Countess Dorothy di Frasso and Mercedes De Acosta among her conquests. Munson never really hit it big in Hollywood. She got her most famous role when producer David O. Selznick looked beyond her freckles and bird-like frame to see that makeup and padding could transform her into Atlanta’s most notorious Madame, Belle Watling, in Gone With the Wind (1939). When thatfilm’s success did little for her standing in Hollywood, Munson switched to radio, becoming CBS’s first female producer. Haunted by professional,personal and health problems, she would commit suicide in 1955.