The Pre-Code Companion is a bi-monthly journal that takes both detailed and personal looks at some of the most important Hollywood films of the early 1930s. Each issue will look at three films and key personnel from some of the best bloggers writing today. It will published for the Amazon Kindle platform. If you don’t have a Kindle, you can download it for either your tablet or your PC.

All profits made from the sale of these issues go to the ASPCA. 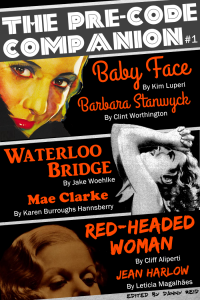 Where do you start when you’re exploring pre-Code Hollywood? If Baby Face and Red-Headed Woman aren’t at the top of the list, try again. This issue looks at two of the key movies in the break between the early talkie free-for-all school of film making and studios functioning under the strict guidelines of the Hays’ Code. 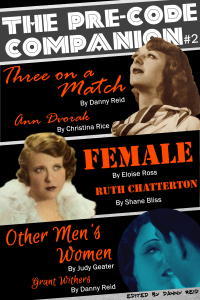 Being a woman in the early 1930s wasn’t easy. These three movies portray the hazards of pursuing your dreams as a woman, whether it means losing your husband, losing your career, or even sacrificing your life. Also covered are three stars of the early 1930s, each of whom hit meteoric fame for a short period before receding into history. 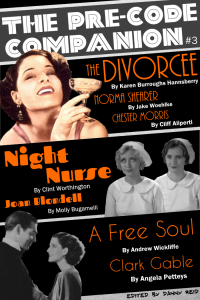 Few can dispute the influence of two of this issue’s stars in the pre-Code era– Norma Shearer and Joan Blondell. For this issue we look at the revolutionary characters Shearer created in The Divorcee and A Free Soul as well as one of the most gleefully amoral films of the early 30s, Night Nurse. 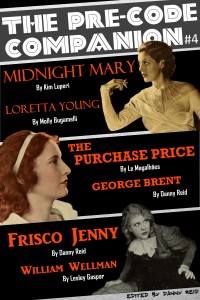 How much are you worth? Not figuratively this time, but dollar-wise? While all of us modern kids have had a lesson in selling yourself from the seminal classic Indecent Proposal, the pre-Code era dealt with this quandary in many more shades of grey. Our three films for this issue all involve prostitution in some way, though it may be for money, power, or simply a way to start over. None show the path as easy– or as nasty– as many later Hollywood films would deem fitting. 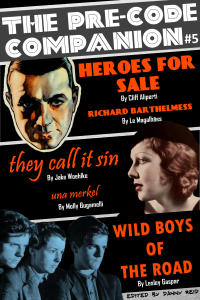 The reverberations of the Great Depression weren’t pretty. Three movies in the Depression Era examined the new realities of work, love and family all with a grim assessment. Lives are destroyed and a country is left in ruins– and hope seems foolhardy. 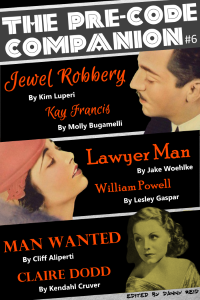 Before Myrna Loy became his big screen BFF for life and before Bette Davis became the queen of the Warner Bros. lot, two very different stars made their inroads at the studio. William Powell, a black hat villain from the silent screen, was given new life as the talkies revealed his urbane wit and sophistication. Kay Francis, meanwhile, exuded class and authority, a glamorous individual who played everyone from vixens to doctors. Separate, they were strong. Together, they were fantastic. This issue examines one of their best– and, frankly, wildest— pairings, the 1932 comedy Jewel Robbery. Also included is a review of one of Powell’s best efforts at Warners and one of Francis’ most delightful comedies to boot.

If you’re interested in contributing or if you have an idea for a piece, please email me. There are only a few rules for contributions:

If you are looking to research a film for a piece, there are a couple of online places I look every time outside of IMDB’s External Reviews. These are all good starting points, as well as books about pre-Code (especially Mick LaSalle’s Complicated Women and/or Dangerous Men) or biographies about the stars or actors.

I’ve also found, and this is a little dorky, that if you Google Image Search for a specific movie, you’ll find blogs that cover that film a lot easier than if you do a regular Google search. Try it out, it’s fun. Well, fun-ish.