“C’mon, make yourself interesting. Have yourself a drink!”

Are These Our Children?: Snowflakes

“What’s the matter with the Constitution? Isn’t it alright?”

I’m going to give everyone two nickels for a dime’s worth of advice: don’t put all of your hopes in winning a single solitary high school speech contest. It has never worked out well for anyone. 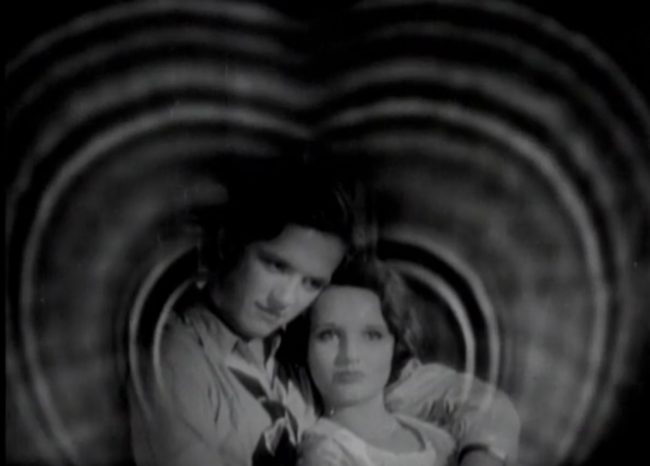 I mention this because it’s especially true for Eddie Brand (Linden), who’s generally decent but sees his ego shatter to pieces as soon as encounters failure for the first time in his life. His failure to win a contest to recite the Constitution sends him into a tailspin, and he near-instantly falls in with ‘a bad crowd’, who are all about the drinking and generally being wild.

The seductress who keeps Eddie in her thrall is Flo, who enjoys toying with him just because he seems so nice. Eddie’s fall is much further than even she would take it, as he spends his downtime assaulting people and getting away with it. 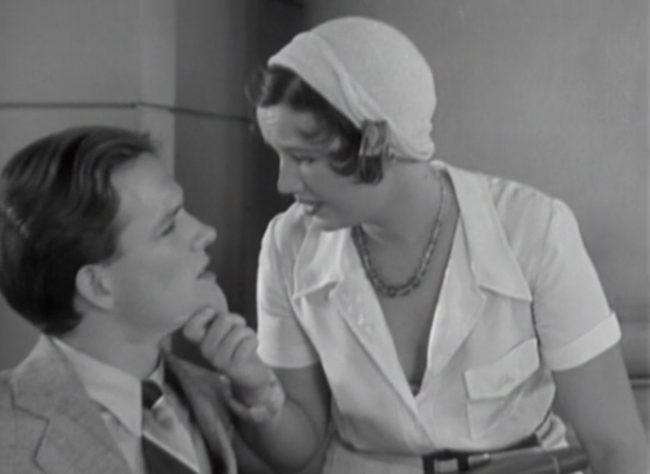 It turns out this unchecked sense of power and privilege has its downsides. Seeking out booze one night, Eddie ends up murdering a family friend in front of his gang. When it seems like they’ll get away with it, Eddie gets cocky. When he gets caught, he’s still cocky. When he decides to act as his own defense attorney, he gets cockier still. By the time of his eventual and well deserved downfall, the movie still wants us to feel bad for a man who’s ego couldn’t even handle a minor speed bump.

Are These Our Children reeks of tepid pearl-clutching, making Eddie and his gang the epitome of wild behavior. Nowadays it’s not surprising– the fact that they stay away from the hard stuff considering how invincible they see themselves is surprising enough. 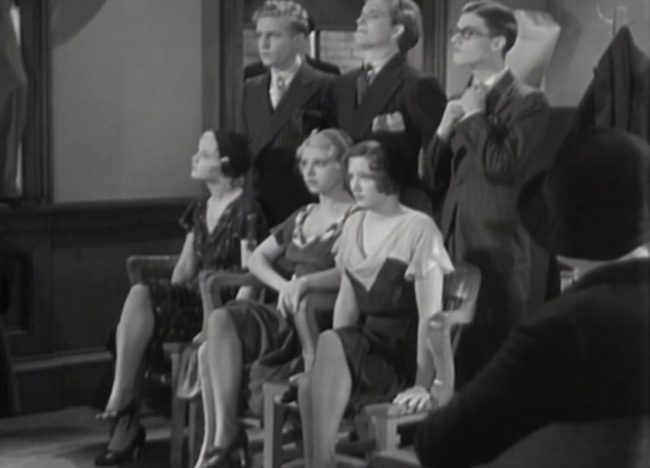 From what I’ve read, Linden was called a young Cagney for his performance here, and it’s not surprising since he’s aping the star every step of the way. His character is supposed to zigzag between being likeable, being despicable, and being a complete idiot, and it loops a little too much. Director Wesley Ruggles even has a poor puppy who hangs around the outside Linden’s house, so the dope can scoop the dog up– how can this kid who murders someone in cold blood really be that bad if he pets a dog who is sitting out in the snow? (Can’t bring him inside, though– that would violate the rules!)

There’s also one howler, after Eddie’s beloved grandmother tells him that Heinie, who was a family friend and recently murdered by Eddie has been shot. Here’s his very-convincing-not-at-all-suspicious reaction that Linden delivers as nervously as one should:

Ruggles, still riding high after Cimarron, made this film as a searing social indictment, but the film is too neat in its morality. Even if it does like Linden, it never considers letting him off for his crimes; the movie wants to titillate rather than aggravate the audience.

Ruggles also often feels like he’s trying too hard. The visual flairs, superimposing swirls and effects to make sure the cacophony of emotions is plainly felt, feel contrived, trying to elevate a simple story into an operatic one. This is compounded by Rochelle Hudson’s character of the girl who is steadfastly devout to Eddie despite months of neglect and abuse; this may be an attempt at romantic touch, but it pegs her as more than a tinge deranged. 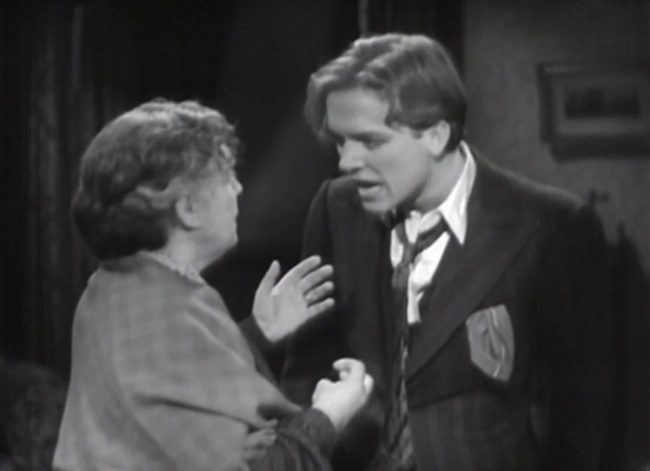 I mentioned titillation, and it serves pointing out the film’s main strength comes from man-eating Arlene Judge, whose dopey sexpot is never quite as evil as she could be– she’s the lazy kind of malicious, a parasite who’s never really realized that’s what she is. Judge is similarly excellent in the much-better, similarly-themed Age of Consent. So watch that.

The real danger demonstrated in Are These Our Children? is not one of sin and debauchery, but that of not knowing when to quit while you’re ahead. There’ll be other speech contests in your life. You can even drink and do speech contests. One must imagine that’s the only way to get through them.

In 1937, RKO applied for a certificate from the Association of Motion Picture Producers so that they could re-issue the film but was told that because the “picture caused a great deal of unfavorable reaction when first released, by reason of its detailed portrayal of the wild life among high school students,” it would “seem to violate the Code provisions” and therefore be ineligible for approval.

Mr. Ruggles prepares for this familiar denouement by going behind the headlines and setting the stage honestly and humanly. It is a lithograph of one section of the feverish New York scene that will not be lost on New Yorkers.

But when Are These Our Children? is going on all cylinders it’s often queasily exhilarating as Eddie’s mania (fueled by Eric Linden’s fierce performance) carries you almost giddily along his road to ruin. While Ruggles is at his best in the courtroom and the clubs and apartments where the kids party their lives away, he’s also good at changing the mood with quiet moments like Eddie’s recurring solicitude for a stray puppy in front of his apartment building that remind you of his humanity even in his worst moments.

Are These Our Children? did big business, tying First National’s Five Star Final for third place in Motion Picture Herald’s list of box office champions for November 1931. From the celebrated Cimarron (1931) creative team of director Wesley Ruggles and screenwriter Howard Estabrook, the movie brought praise and stardom to its young co-stars Linden and Judge. In addition to future Linden-Judge and Judge-Ruggles teamings, it’s worth noting that Ruggles and Estabrook also collaborated once more in their very next RKO feature, Roar of the Dragon (1932) starring Richard Dix.