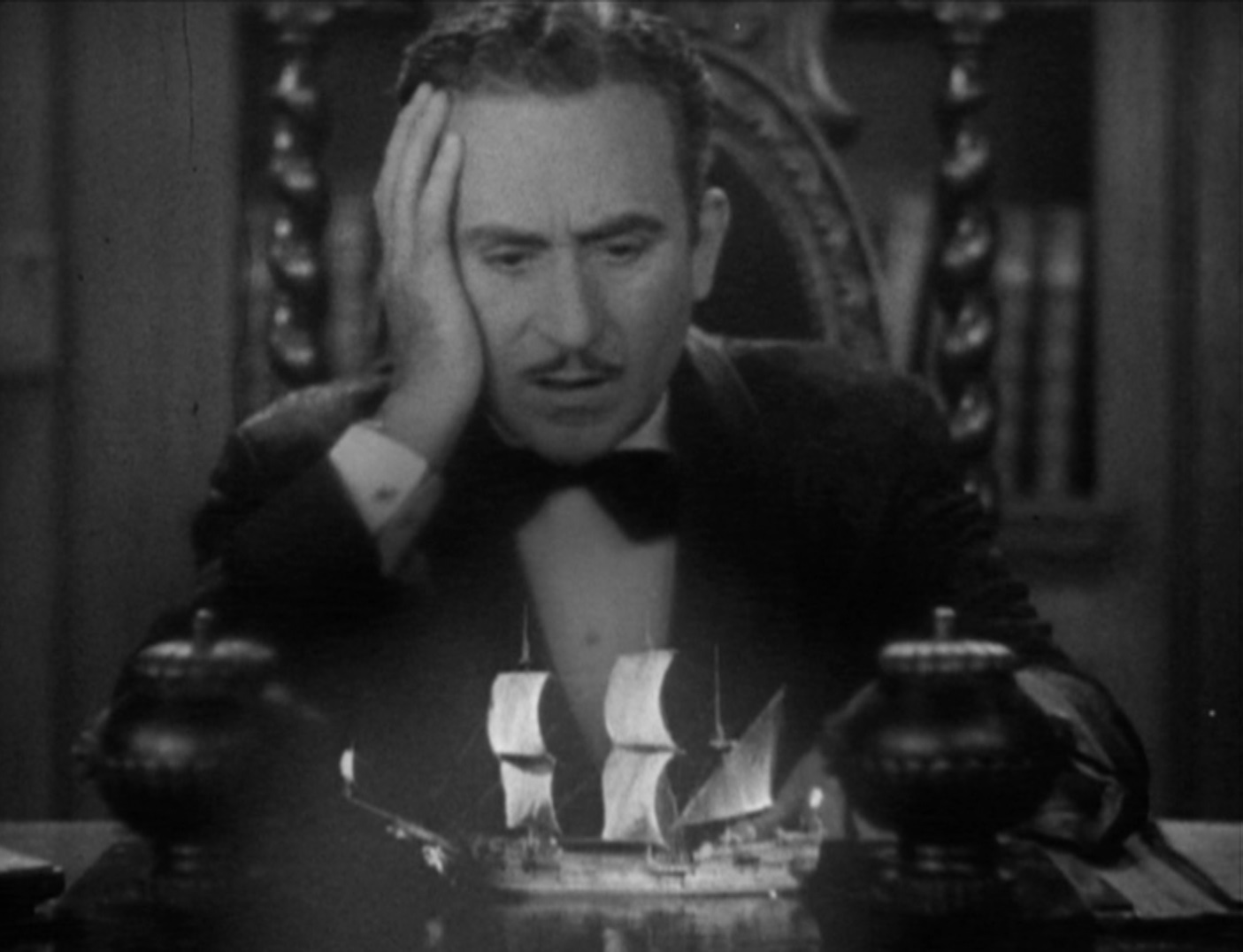 “Poppy, I crave adventure. I should like to match my wits against some arch villain. And then– love at first sight. I should like to rescue some beautiful woman from a terrible danger. I think I should prefer a foreign princess. Yes, her gratitude will be very affecting.”

Captain Applejack was one of the first pre-Codes I ever saw. Sometimes dull, sometimes unhinged with lascivious glee,  a decade between viewings and I still remembered this one pretty well. Once you see John Halliday stomping around in full pirate gear, sprouting the most ridiculous nonsense, it’s undeniably hard to shake. 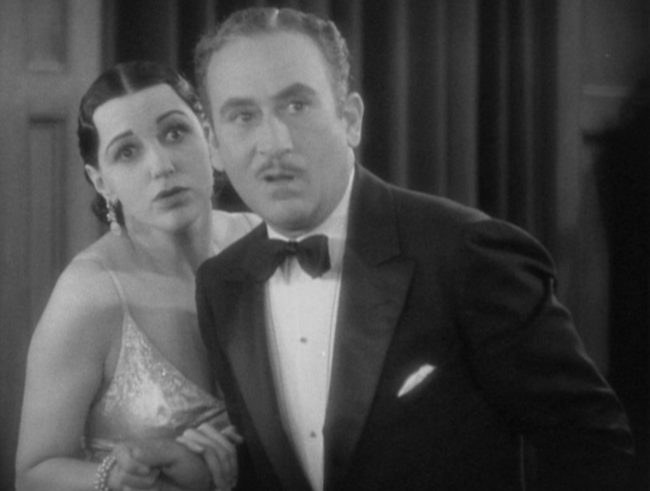 Halliday plays Ambrose, the last in a long line of Applejohns. He suffers a life of suffocating Britishness, and he dreams of stereotypical ideas of men’s adventures. Lucky for him, one dark (and very stormy) night has a mysterious woman in a slinky dress appear at his door in the middle of the night. She’s on the run from a Russian count who soon arrive brandishing a gun. Others arrive, including a mystic and a duplicitous police officer. Soon enough, Ambrose discovers an old letter that lays out the truth about his family– his great grandfather was the pirate Captain Ambrose Applejack, and Applejack’s treasure is hidden somewhere in the mansion.

And, wouldn’t you know it, Applejack’s ghost imbues meek Ambrose. Soon the aristocrat is racing around the house, demanding grog and calling everyone and everything “SCUM!”. It’s all quite predictable while also being quite unhinged. 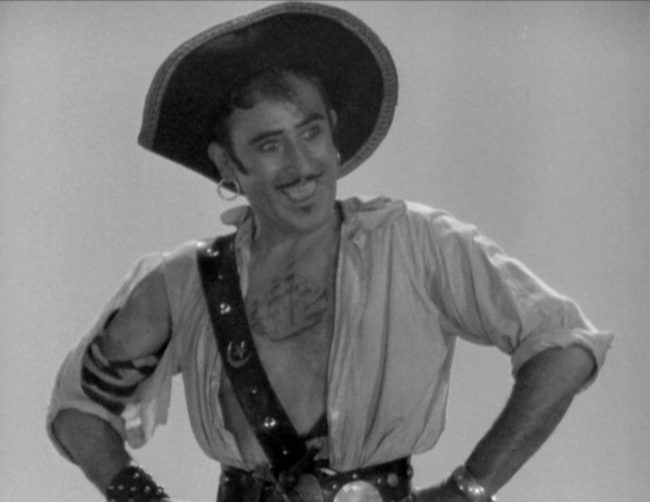 Halliday plays Applejohn/jack with a complete lack of pretension, so much so that his complete disjointed joy is communicable. The power of his performance and the film’s desire to follow all of it keeps the movie vibrant, helped with a spirited performance by Kay Strozzi with a bad Russian accent that is truly a marvel to behold.

The film is technically a bit off. The foley drowns out dialogue on occasion– and, yes, we know it’s stormy, you can tone it down a bit– and also produces a lot of gunshots even though we see no one firing. Several times director Hobart Henley has trouble keeping everyone in the frame, and the movie still feels trapped by a minimum of camera movement, typical of the ’29 to ’31 era. 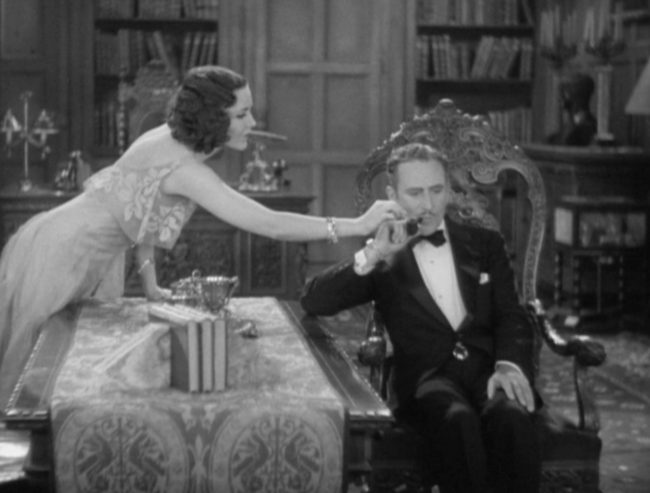 To compensate, frequent undercranking is deployed, making the film look like a silent comedy with all the requisite lapses in sanity that would seem to imply. The dialogue, when it isn’t dull, is outright nutty. The 10-minute sequence in the center of the film where we flash back to Captain Applejack’s over-the-top life as a pirate is a wonder, like if you gave grade schoolers a bucket of Pixy Stix and told them to recreate any random scene from the Pirates of the Caribbean canon.

The film’s idea of pirate dialogue is to mix a lot of ‘ye’s, ‘yay’s, and ‘nay’s interspersed with some wonderfully laughable accents. Sample line from this section:

Someone got paid for that! So many dopey cliches are paraded through this nutty production, it’s almost easy to buy into the idea that the film is meant as self-parody. 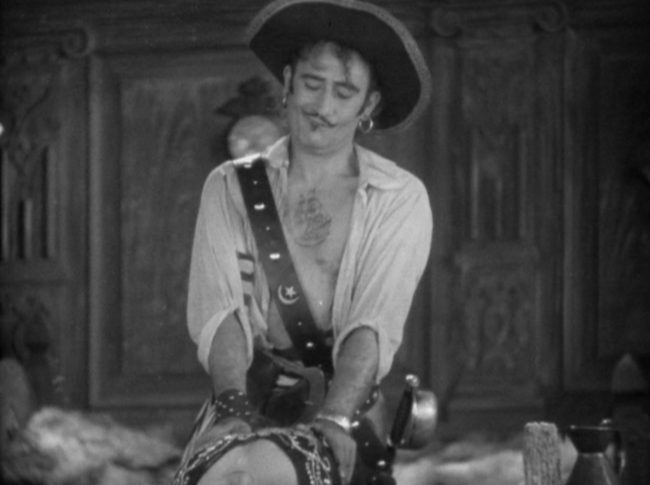 Mary Brian also stars as Poppy, Applejohn’s faithful ward who hints rather bluntly towards he true feelings from the beginning of the film. In another one of the film’s weird jokes, she is first billed, stuck in the Anita Page role of spunky girlfriend and not much else.

Captain Applejack provides plenty of double entendres and cleavage, all while running around with bug eyes and its tongue hanging out. The movie is a pleasant, nutty time, and simply has to be seen to be believed.

As a play, Captain Applejack opened on Broadway at the Cort Theatre on December 30, 1921, and ran for 195 performances.

The story was soon thereafter the basis for a silent film, although why they changed the name to Strangers of the Night (Louis B. Meyer, 1923) I do not know. The main players in the cast were Matt Moore as Ambrose Applejohn, Enid Bennett as his ward Poppy, and Barbara La Marr as the vampish Anna Valeska, who in one evening gives Ambrose the thrill of several lifetimes.