“I know that wrong is wrong, and no amount of talking will make me see otherwise.”

A few years back, my then-girlfriend and I had a disagreement. I had recently been laid off from my position as a programmer, and had opted to take unemployment. The girl found the idea objectionable, insisting that if you’re unemployed, you should take any work that came along– she would rather I work at McDonalds and get paid for a few months while I did job hunting. I did not go to work at McDonalds, though I do agree that it speaks to a bit of snobbery on my part. If I hadn’t had unemployment, I’d have definitely had to consider that option; money is as money does.

It’s the same conflict that Johnny (silent star Jack Mulhall) in The Fall Guy faces as he chooses between starving his family or working for a fish monger. Is cutting and cleaning fish below the dignity of a smart man? Or at least a man who thinks he’s smart? Johnny instead chooses to run products for the bootleggers with hopes it will lead to respectable full time work. That this doesn’t work out is a matter of both dramatic necessity and common sense, the latter something Johnny lacks in spades. 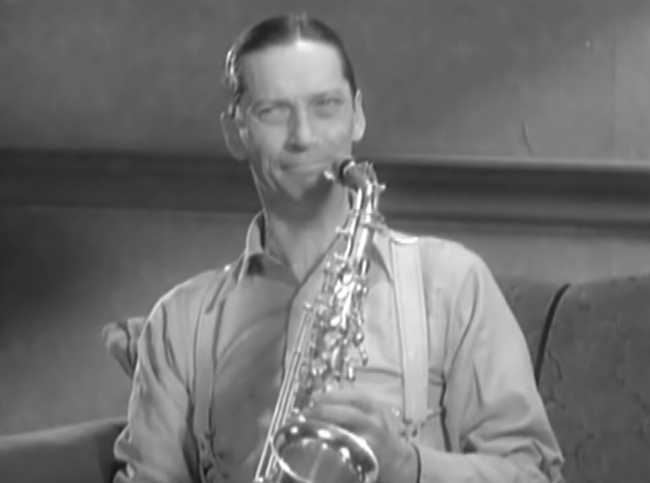 This film features a lot of Ned Sparks smiling. It may put you off.

The plot is more complicated than that, but not by much. The movie stays mostly confined to one room as Bertha and Johnny argue and fret about their future, and Johnny’s desperation to prove that he can make it on his own blowing up in his face in quiet off to the side. There’s a lot of broad comedy mixed in, too, with Sparks’ battle with a loan shark popping up at inopportune times.

RKO was a studio always in search of a house style, and wouldn’t really hit on anything until their adventure movies few years later and the Fred and Ginger movies that would dominate the latter half of the 30s. The Fall Guy definitely feels along the lines that was more in tune with Warners pictures, especially considering the amount of backlot being used to double for New York. That being said, there’s several fairly sophisticated camera setups and clever use off sound design throughout the film, as director Leslie Pearce (in his only feature) mixes the many, many static shots of the apartment with a few showy moments that briefly shake things up. 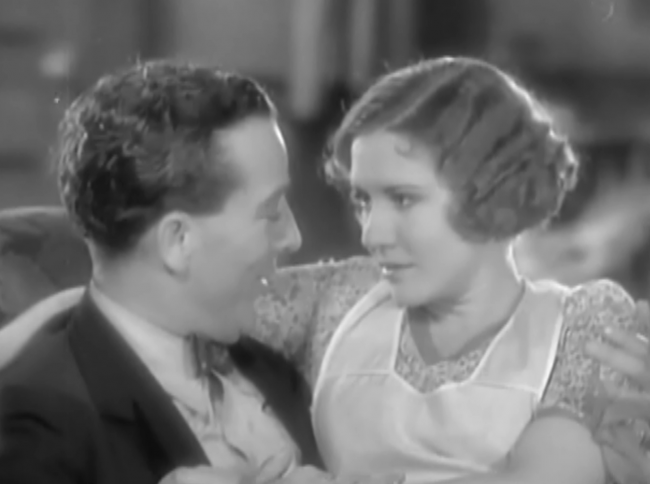 This helps build the city as one of quiet frustration. The Fall Guy never mentions the Depression, but work is scarce and the temptation to give up lurks everywhere. It’s also about middle class snobbery– the idea that jobs are beneath someone based on their own inflated sense of self worth. This is before the Depression became desperate.

In the end, Johnny gets offered a job by a detective for his ‘keen understanding of the criminal mind’ after he helps crack the mob. Is it sanctimonious bullshit? Yes. Johnny has learned nothing, and has found himself rewarded for quick thinking and luck. But the relationship between Johnny and Bertha, one of affection and minor battles, is what ultimately makes the film likable. Despite his womanizing and craven desire for a quick buck, the relationship between them works even when the film flails. 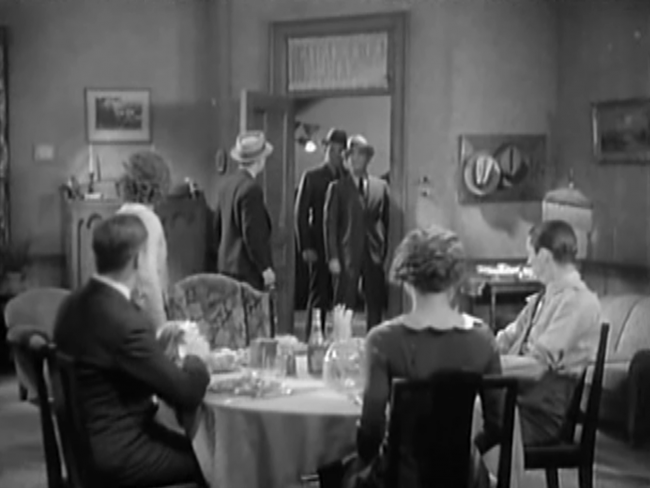 “I don’t know how many more people will fit on the set, but come on in anyway.”

Clarke, stuck in mostly simulacrums of homemade outfits, is luminous. Ned Sparks nails the film’s comic relief as he painstaking learns the sax by correspondence. Sparks’ comic persona is still under construction, and it’s truly off-putting to see him smile quite so much. Jack Mulhall in the lead has a tendency to over emote, but manages to nail the movie’s softer moments in spite of himself. The rest of the cast barely registers, as the movie avoids most shades of gray and heads towards broad archetypes instead.

Times have certainly changed– can you imagine Mae Clarke playing a character named Bertha in a modern movie?– but The Fall Guy doesn’t feel too far out of step from other 30s domestic dramas. The Fall Guy is one of the more watchable 1930 releases, with only a few tertiary actors turning in wooden performances. The comic relief is solid, and the pace snappy even if the stage origins of the play feel obvious in its bones.

TCM is showing this film this Thursday (August 20th) as part of their Mae Clarke day for Summer Under the Stars. They’re also showing “Turn Back the Clock” which you also recently reviewed.