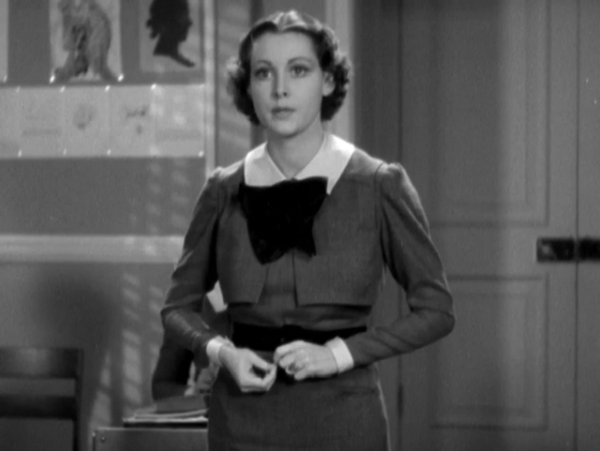 “I’ve always wanted to get fried. Just to know how it feels.”

Finishing School makes no immediate bones about the kind of movie its trying to be. Its opening credits, fashioned in that playful 1930s manner where characters are merely referred to as ‘The Girl’ or ‘The Boy’ and etc flashes across the screen. The sequence ends with “And the snob played by…”. We’re then treated to a closeup of a brochure for a private finishing school, Crockett Hall, describing it as the place for proper young ladies to go and learn, and for a mere $6,000 a year.

I’m almost tempted to call the movie unsubtle, but that was before I read other reviews of the picture where the point flew so far above their heads it may as well have escaped orbit. Crockett Hall is indeed a den for the hoity toity to instill their values in the next generation. While the headmistress, Ms. Van Alstyne, insists that being a lady is all about moral turpitude and pure thoughts, the real values are thus: don’t get caught.

This is a shock to the school’s newest inductee, Virginia. When she arrives, she’s demure and as close to sainthood as a teenage girl can be. By the time she leaves, she’s gotten a taste for everything in life, both the finer and the less-than-such. That turns Virginia into a pariah, and a unique one for this film’s place in history.

Virginia’s roommate, Pony, is the one to quickly teach her the ropes, sneaking her out of the school for a weekend on the town with boys and drinking, a reward for being a good friend. Unfortunately, one of the boys tries to get a little too fresh on Virginia, and he’s laid flat by a busboy named Mac.

Mac is one of the more contrived inventions you may catch on screen, a doctoral student working his way through school on a busboy’s salary while being impossibly perfect. He is kind and sweet, never tries to take advantage of Virginia, knows just when to swoop in to save her, and even feeds a stray alley cat out of the goodness of his heart.

To people like Ms. Van Alstyne and Virginia’s mom, Helen, Mac is the enemy. A product of hard work rather than good breeding, he has the rough hewn sexiness of the lower class without the entitlement that someone attending Yale is expected to have. He behaves like a good, tolerable person with few or no bats in the belfry, and is exactly the kind of thing that Crockett Hall was built to keep out.

One scene really nails the attitude of Crockett, and that’s a classroom lecture to a room of young women about the works of Tolstoy. They’re not reading his books, but they are expected to know a brief summary of his works. Just enough to make themselves appear intelligent, naturally. When they call it a finishing school, it’s merely a preparatory for the task of being the trophy wife of a rich man. And it will break anyone who tries to escape their foregone old money nuptials, as Virginia attempts to do.

Virginia’s accidental escape plan involves getting knocked up by Mac on Christmas Eve in the boat house. Because of when the film was made at the tail end of the pre-Code era, it cannot actually say that she’s pregnant, only imply it through the passage of time and Frances Dee’s increasingly unhinged performance.

The climax is both Virginia’s mother and Ms. Van Alstyne cornering Virginia is a double attempt to shame her. “The school’s reputation!” cries Van Alstyne. “What will my friends think!” shrieks her mother. Virginia, who’d just been getting an overview of Anna Karenina, almost ends it when Mac makes another one of his patented ‘nick of time’ arrivals.

Also on hand is Virginia’s absentee father, Frank. He’d earlier shown up to brazenly suggest that Virginia be allowed to do whatever she pleased with her life, and here he shakes Mac’s hand in congratulations at their now-impending nuptials.

The implication is that it is catty women who control the social lives of young women while wise and patient men know better and have more empathy. It’s a fairly ridiculous conclusion, but, I suppose, something easier to swallow for the audience than the more bleak supposition that every aspect of the upper class is actively geared towards preventing the ascension of good, hardworking people to its ranks.

There are some great moments in Finishing School even if it feels a bit inconsistent. One scene featuring one of the girls ripping off her own braces so as to avoid catcalls from boys is horrifying (especially to someone who had their own metal mouth for years), and another long silent take of Dee trying to overcome her Christmas grief contains some nuanced acting beats.

However, while the film’s commentary is interesting and Ginger Rogers shines in a supporting role– with no guesses as to whether Pony or Virginia’s names are meant to be more suggestive– the film definitely feels a little too on the nose, even for a preachment yarn.

Finishing School is an alright movie with some great pre-Code flourishes. Depending on how willing you are to suck down its castor oil, it’s a timely reminder that the divide between the upper class and the middle isn’t so much just from the dollars in a bank account but by the means of a very self conscious and destructive agenda.

The more one thinks of some incidents in the film the more inane they seem. But one must pity the players.

I expected Dee to be horrified by the hotel room party of men and booze, yet she takes it in stride, admitting that she’d like to know what it feels like to be drunk.  And drunk she gets.  Wait a minute!  How can that sweet young thing suddenly want to behave this way?  Oh, I don’t know, maybe because she seems to be acting like a real person, in intriguingly human terrain, somewhere between complete saintliness and all-out sluttiness.  Even after she’s impregnated by her new boyfriend, medical intern Bruce Cabot, the movie seeks no punishment, no finger-wagging lesson.  And Cabot is no sleaze, actually a great guy who is working his way up from nothing.  Remember, scripts like this one would be banished from the screen in the summer of 1934 (unless they were given complete overhauls).

What’s most fascinating about Finishing School is the way it daringly portrays the utter hypocrisy behind upper-class mores, which hold that as long as one isn’t “caught”, one can get away with just about anything; the goal is to avoid detection and public shame.