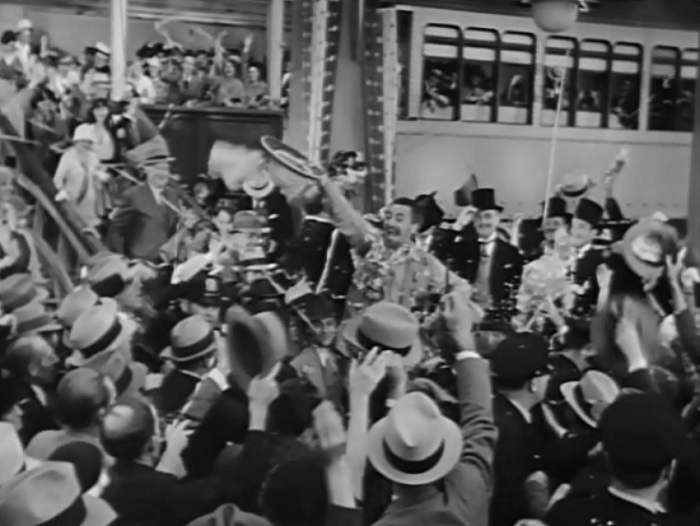 Meet the Baron: Or Run Away, Terrified

After hitting the utterly bizarre, unbelievably dire Hollywood Party earlier this year, I was shocked and more than a little worried when I discovered that a number of the film’s principals were actually reuniting for that endeavor. Jimmy Durante and Jack Pearl, who gaily danced through Hollywood Party nose and ridiculous beard in hand, were also the stars of Meet the Baron, made a year earlier.

The similarities don’t stop there, though Meet the Baron does flourish in comparison. While it is indeed another train wreck that resulted from MGM throwing all of its talent in one bucket and furiously swishing it around, it doesn’t hold the same feverish logic that had given us Mickey Mouse introducing a sexually suggestive cartoon about chocolate soldiers being covered in melted marshmallows while attempting to climb candy canes.

That works to Meet the Baron‘s detriment one one hand: only one moment in the film (helpfully posted via YouTube above) ever reaches any sort of memorability. The rest is just cinematic sludge.

You can usually smell a bad comedy when the plot is overcomplicated. Meet the Baron has a pair of lazy deckhands who were lost in the jungle before they come upon a famous explorer named Baron Munchaussen who has been lost for two decades. After he ditches them to die without any water, they jump at the chance to impersonate him and head back to civilization.

They’re given a ticker tape parade upon reaching New York, given a spot on a radio show, and even invited to lecture at Cuddle College, a place, believe it or not, filled with nubile young women, plus Edna Mae Oliver, Zasu Pitts, and the Three Stooges to balance things out. Now the Baron and his sidekick, Joe McGoo, must keep up the charade, even while the real Baron is making his way back from Africa, and the fake Baron’s aunt with much-commented-upon-keister may recognize him first. AND…

There’s a lot going on in Meet the Baron, and the film makes plenty of time for everything. Ted Healey and the Three Stooges (this is early enough in their careers that Curly is still billed as Jerry) get a long extended bit of incongruous slapstick, while Oliver and Pitts serve themselves up as well-flattered foils of the two leads.

Durante and Pearl, of course, are comedians who rely almost entirely on malaprop humor– that’s where a word that sounds like the intended word is used to make a joke. I may say, “This movie is absolutely infaturatin’!” instead of ‘infuriating’, and that would be the joke. The entire joke.

Repeat ad nauseam, of course. Pearl, who was a huge radio star with his Baron character, is presented as the lead in the film’s title and its romance, but vanishes amidst all of the over-the-top chicanery. Durante, as per usual, is louder and more frantic, like a hyperactive child who’s desperately afraid that they’ll die if someone’s attention is diverted away from him for a mere second.

The stooges try their best to intercede– their brand of slapstick is certainly less aggravating than the Durante/Pearl non-starter jokes– but they’re still subservient to Ted Healey in this time period, who upsets much of the chemistry. Three idiots and three pies is funny– four idiots and three pies just ain’t as much.

Meet the Baron has one great scene of pre-Code naughtiness; I saved you a lot of time and effort and linked that for you above. As for the rest: staaaaay awaaaaaaay.

Like many a radio star, despite any background in vaudeville, Jack Pearl simply lacks screen presence. He really is nothing but a voice, and while that voice could evoke anything the listener might imagine, the reality of Pearl in person is rather lackluster. The deck was stacked against him, however, since M-G-M stuck him with that Pre-Code incubus of comedy, Jimmy “Schnozzle” Durante in the role of Joe McGoo. Followers of the Pre-Code Parade should know my low opinion of Durante by now, but I do have to acknowledge that he tops Pearl in every respect. As a team, they’re redundant, since both rely heavily on malaprop humor, probably the least cinematic form of comedy yet one that dominated radio, Pearl being little different in this respect from Amos ‘n Andy.  I can understand the appeal of malaprop (as well as dialect) humor in an era when few immigrants were yet fully assimilated into American culture, and I can also see a class element in Durante’s use of it as an ethnic social climber trying to sound smarter than he actually is. But that sort of comedy doesn’t have anything to stick to now in the 21st century, and malaprop comedians suffer for it. When Durante’s dialogue ceases to be funny we’re left with an obnoxious narcissist whose raw pushiness may still have appealed to Depression audiences rooting for aggressive survivors but again leaves us cold today. To us, speaking for myself, he simply sucks the air out of any room he’s in, suffocating the comics forced to partner with him — Buster Keaton being his most unfortunate victim. […] By comparison, Jack Pearl is helpless against him, while the Stooges cheat. Rather than attempting to top Durante’s jokes, they get to throw water in his face and throw him down a flight of stairs.