The Millionaire (1931) Review, with George Arliss and David Manners

The Millionaire: A Get Revenge Quick Scheme

“Ignore the doctors and live forever.”

Driving down the street, I’m always struck by how carefully orchestrated our urban world is. Roads designed by planners evolving over decades, sometimes centuries, while they’re lined with carefully chosen houses and businesses. Each of those buildings is designed by an architect, built by a construction company, piped by a plumber, given the once over by an electrician, and, for some, that’s still just the start.

The Millionaire takes the same sort of long view of society. There may be a lot of people scurrying about, but the world they live in is the result of hard work, institutions, and passion.

By the time the movie opens, James Alden (Arliss) is something of an institution himself. The founder of a major car manufacturer (apparently the role is based on Henry Ford), he refuses to compromise on quality much to the frustration of his layoff-happy colleagues. A doctor’s evaluation tells him it’s time to step-down, and the movie takes its time in showing the heartbreak involved in leaving a company he put so much love into. 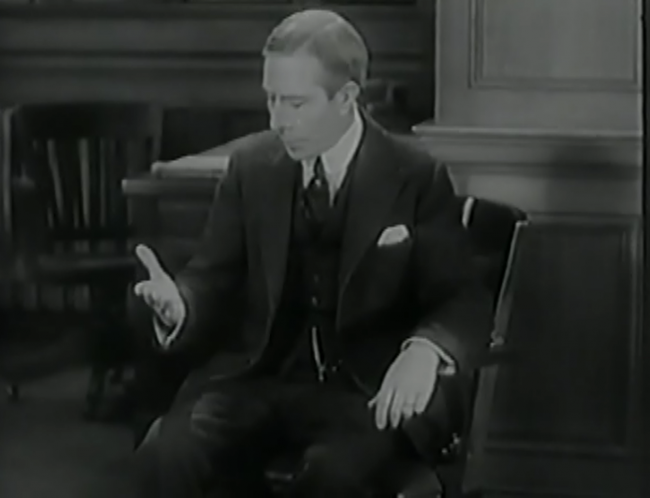 “And how do you feel about this, right hand?”

He heads to retire out west, where most of his days are filled with health food and looking bored in a garden under a shawl. His daughter, Barbara (Knapp), is very sweet and kind, but stuck on a rather unimpressive playboy. And Alden’s wife (Ms. Arliss) just dotes. The former adrenaline junkie who relished working hard and puffing his pipe now sits munching on sprouts, dejected.

This changes when he has a chance encounter with a life insurance salesman named Schofield (Cagney). Alden is annoyed when Schofield admits he can’t give a policy to a retired man because they’re simply too happy to accept death. And then, when prompted, Schofield tells Alden exactly what he would do in his place– join in on a small business venture and use that to fill his time.

Cagney’s brief scene is a knockout, literally waking up the entire picture and shaking it out of its doldrums. It’s a nice kind of moment, a reminder how a brief encounter with a stranger can throw us completely out of our funks even if that was by no means their intention. Schofield leaves without winning the big sale he wanted, but he manages to change a man’s life in less than a few minutes. He promises he’ll be around again to see Alden, and, frankly, it’s kind of a huge disappointment that he doesn’t reappear. 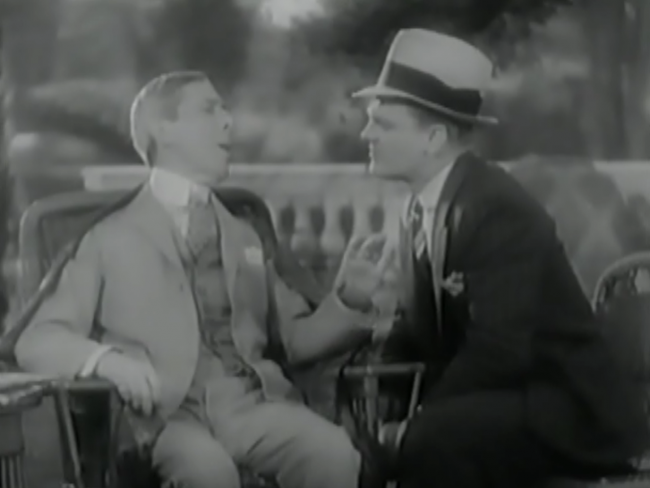 Picking up the picture.

Still, the movie spent the first half letting Alden soak in his nostalgia and frustration, and now he gets to work, setting on buying a share of a gas station under a presumed name. He partners with the whitebread Bill Merrick (Manners) to purchase a bustling station from the shady Peterson (Beery). But it turns out that Peterson tricked them, as there’s a new highway that opened up a mile away with a new Peterson station right there, and so he two decide to open a new gas station. Alden maintains a double life keeping his new career from his wife and daughter, sneaking out during the day and running the new service station under their noses.

Bill quietly reveals himself to be of good breeding as well and an architectural student who is simply trying to prove himself in the world before heading behind the drafting table. He and Barbara had danced together a few years back and a romance blooms, much to Alden’s amusement. Alden and Merrick’s new service station is a hit, with Peterson eventually giving them fistfuls of money to exit the business. Alden’s old partners arrive from Detroit and beg for his return, while Bill and Barbara get engaged.

It’s kind of a relief as the movie progresses that as Alden’s double life is revealed, everyone accepts or discovers it with a smile, happy to find that something so simple has brought life back to him. It feels very emotionally cathartic, an idea of a world where people are happy with one another’s happiness rather than how it so often really seems. 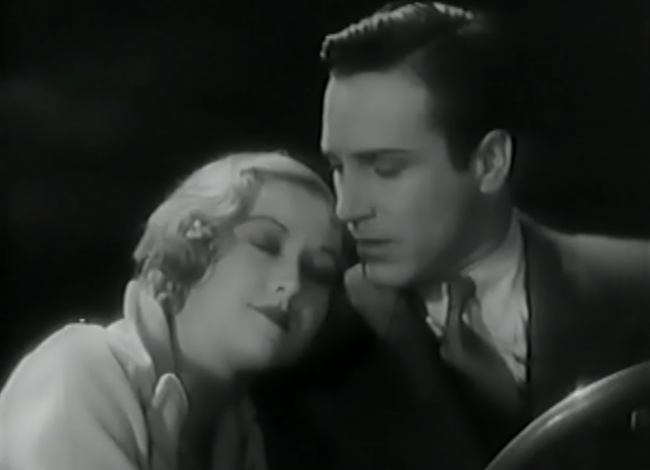 Is this love, or is it just odd surreptitious hand placement?

(Notably, and oddly for a Warner Brothers picture, the possibility his layoff-happy subordinates duped James into leaving in the first place by means of a false doctor’s exam is never really brought up. I guess the filmmaker’s didn’t want to undercut the feel-good attitude with an easy jab at money grubbing industrialists who were already on their knees at this point in the movie.)

As the main romantic couple, David Manners is appropriately doofy and Evelyn Knapp is gorgeous. Both have an easy, if cartoony, charm, but it works well enough in the confines of the film’s light farcical momentum. Noah Beery is pretty funny as the buffoonish villain, too. 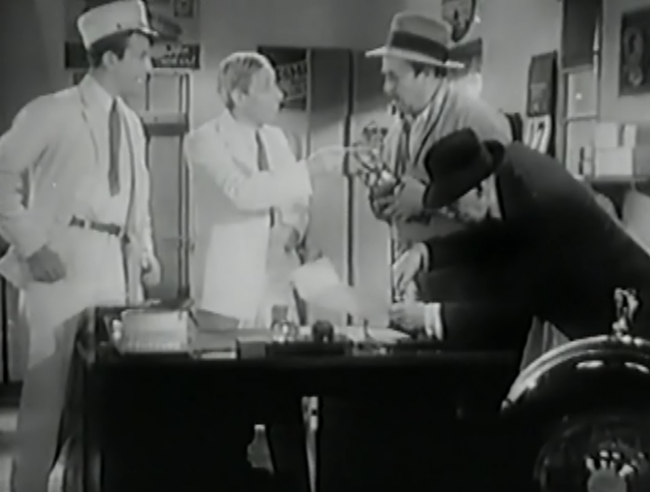 Kind of a start sad, get happy, stay happy kind of film.

Arliss, like in a number of his films, is the bemused puppet master, manipulating things according to his own values and only to have everything land neatly on a happy ending right before the credits roll. He’s rather theatrical, but so damn charming– like a giddy kid who knows it’s his birthday and he’ll get his way no matter what.

The Millionaire is one of those feel-good Depression comedies. No one is ever in serious danger, there’s no real anger or grief. Everyone gets what they deserve and there’s a big smile to close things. While it’s still pretty rough in terms of style and the first half seems redundant nowadays, it all serves to create a sensitive mood piece about how necessary it is to have something in life to drive you, even if it’s not necessarily an engine.

It speaks well of the British, classically trained Arliss that he was able to recognize the talents of Cagney, who in age, temperament, and style was so different from himself. Of course, it was that contrast Arliss was after, but he couldn’t possibly have known how telling and perfect the pairing would seem in retrospect. In The Millionaire, the past and future meet at a moment of ideal stasis, just before the past has started to end and the future about to start. Two actors, two styles, and two eras are there before our eyes– in a union both incongruous and yet surprisingly harmonious, like that old video of Bing Crosby and David Bowie singing the “Little Drummer Boy” duet.

Realizing that the one-scene role of an insurance salesman who unwittingly inspires the businessman to come out of retirement was very important to the film’s success, Arliss personally interviewed the young players Warner proposed for the role. When he met Cagney, he was impressed that of all the actors, he was the only one who didn’t seem to be acting. His natural behavior and innate cockiness were just what he wanted, and he instructed the casting department to have Cagney report for shooting just as he had dressed for his audition. When they rehearsed the scene on the set, Cagney asked if it would be all right if he adjusted Arliss’ shawl should it fall from his shoulders during filming. The elder actor replied, “Young man, you do anything you like. I trust your judgment implicitly.” The result was a charming scene in which Cagney’s youthful enthusiasm provided the spur to Arliss’ decision to go back to work.

Hi Danny. I’m not sure if I have asked you before, but I would like to invite you to participate in my upcoming blogathon in August. It will be my very first one I’m hosting, and looking for as many participants as I can. The link is below with more details

I saw this one a few years back and remember finding it a bit slow and boring, plus it got on my nerves that Arliss was so rich and could just put everything right by reaching into his pocket. But I did love the Cagney scene – and maybe should give it another look some time!

David Manners looks spookily like Don in ‘Mad Men’ in your third still down.

It’s realllllllly slow to start, but once it gets going, I enjoyed it.

For more info on THE MILLIONAIRE please visit my blog at http://arlissarchives.com/category/the-talkies/the-millionaire/