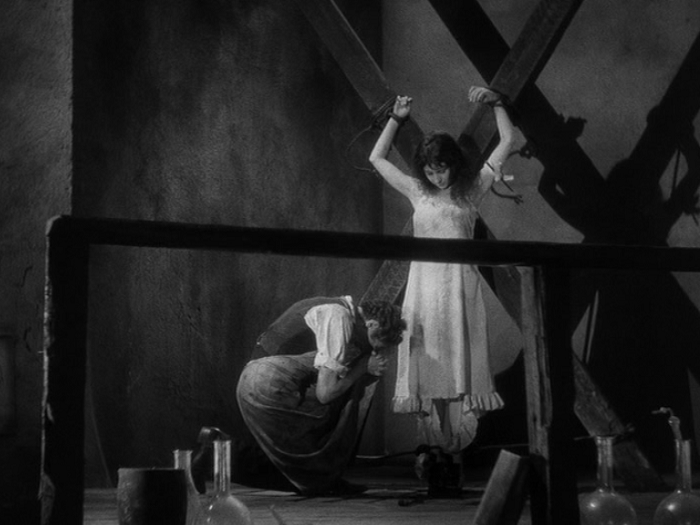 “Rotten blood! You… Your blood is rotten, black as your sins! You cheated me! Your beauty was a lie!”

It’s Paris in the 1800s. Science has arrived, but it’s still pretty goofy. Meanwhile, women keep being found dead in the Sienne.

Based on, though not much resembling, the famous Poe short story, Murders in the Rue Morgue involves mad genetic experiments, an ape that thinks its a man, and a man who behaves like a monster.

That’s Dr. Mirakle, a sideshow proprietor whose grand exhibit is his good pal, Erik. Erik– also known as “The Apeman, the Beast with the Human Soul!”– is a gorilla who talks to Mirakle, and Mirakle talks right back. As Erik explains to the good doctor, “I’m in the prime of my strength! … and I’m lonely.” The carnival audience, who’d expected something a little more fantastical than a man translating a monkey, is less than moved.

Erik takes a shine to a girl named Camille, who has a big bonnet that’s ripe for pinching. Her boyfriend, Pierre, is about as impressed as she is, which is even less so once Mirakle starts waxing about Erik’s startlingly coarse language that’s coming out in high pitched screeches. However, Camille’s mother is so excited that Mirakle may come from a background of means rather than the poor Pierre, she eagerly pushes her daughter towards the madman.

It’s a bit unnerving, and things are only going to get weirder. Pierre is a medical student who’s obsessed with studying the prostitutes who keep winding up in the river. These, of course, come from Mirakle and Erik, too, as the doctor is obsessed with ending Erik’s loneliness by combining his blood with that of a woman. This blood mixing is step one, naturally: we aren’t explicitly told step two, but the longing in Erik’s eyes certainly tells the rest of the story.

Pierre figures this out and is none too pleased, and so he begins following Mirakle around. This results in a rather unfortunate series of events involving kidnapping, murder, and a chase among the Parisian rooftops. The gorilla’s libido is not easily satiated and what he wants to do to Camille… well, it ain’t pretty.

Between White Zombie, this, and Dracula, I think the main difference between all of the Lugosi characters is the angle of their eyebrows. There are personality differences, too, but in all we have Lugosi as the amoral creature preying upon the supernatural to subversively rob the souls of those he deems unworthy.

Here (and often) it’s women, those unmistakeable objects of purity that he seeks to defile. His Mirakle here isn’t just violating conventional morality, but the bounds of sanctified religion as well. Early in the film, he mocks the crowd for accusing him of hearsay. “Do they still burn men for hearsay?” he cackles. Later, Camille’s prayers to the crucifix gleefully foreshadow her own fate, not just as one of Mirakle’s strung up victims but as a good person who becomes helpless in the face of pure primordial evil.

Murders is Lugosi’s follow-up to Dracula and seems to be reviled by Universal horror aficionados. Part of the film’s problems come from its portrayal of Erik, who alternates between a man in a goofy ape suit and close up footage of a real ape– it probably would’ve been stronger if they’d stuck with one or the other. There are also some long digressions of comic relief from Dupin and his roommate and a long focus on the romantic subplot which seem much closer to the Warner Brothers attempts at horror rather than the usually more focused Universal works.

The love plot is pretty cutesy, but I think it has some excellent moments. One of my favorite shots in the film comes during an extended sequence at the picnic where the camera is attached to the swing and we’re treated to the same free weightlessness that Camille is experiencing before the revelation to Dupin of who gave her her new bonnet brings down the whole affair.

The movie often falls back on comedy, and that definitely isn’t to everyone’s cup of tea. In spite of that, Murders in the Rue Morgue may be one of the more consistently morbid films from the era, often preying upon fears of scientific malfeasance and thinly-veiled implications of miscegenation to excite the audience. Like Island of Lost Souls, the implication of bestiality is closely tied to that of evolution indicate a general moral collapse, a scary course for the 1930s away from the godliness that had typified the nation since its earliest Protestant-bound days.

Dr. Mirakle was the loose canon, the mad scientist whose abandonment of the morality of science allowed him to pervert god’s domain. Men like him were already haunting the wings of the 1930s, with Josef Mengele and a horde of other amorals prepared to execute this film’s nightmares on a large scale.

While the film is certainly a conservative parable, that doesn’t discount how it manages to reflect the sneaking suspicion that somewhere along the line progress and morality had gotten on different rails. Murders in the Rue Morgue, goofy ape costume and all, is a fascinating glimpse into a world just realizing that it had much more than just god to fear.