Murders in the Zoo: Tiger on the Prowl

Nature is scary. Spiders and snakes are bad enough, but once you start getting larger game into the picture, things can take a dangerous turn. And I’m not just talking about how much of a threat that a hungry lion is to you, but the psychological realization that you, too, are part of that grand food chain, and for all the airs of civilization, man is just a terrible beast as well.

One particular terrible beast is Dr. Eric Gorman (segues!), a millionaire big game hunter who spends his vacations hunting animals to sell to his hometown zoo. He takes his wife, Evelyn, along with him, and uses his downtime from hunting lions to hunt any man who gives her so much as a sideways glance.

Sure, he’s rich, jealous, manipulative, and is often placed in the same frame as a tiger so that both can glower with predatory glee, but that doesn’t make him your ordinary kind of monster. This is demonstrated in the movie’s rather notorious opening in which Gorman leaves a man in the jungle with his hands tied together and his mouth sown shut.

Unfortunately for a lot of people involved, Gorman’s wife attracts plenty of suitors who feel the need to rescue her and jealously lord over her in their own ways. Poor Evelyn is just along for the ride, happy to jump into another abusive relationship with Roger Hewett if it means that he can help her stand up to Eric and his constant possessive paranoia.

Stateside, however, its apparent that Eric is a highly respected citizen and a favorite at the local zoo where he’s seen as a savior in lean financial times. Thanks to what he’s returned with from his safari, the zoo has even managed to recently hire ditsy and tipsy Peter Yates as a press agent and comic relief. He sees Gorman’s social connections as a grand way to make money: a banquet among the zoo’s big game.

The zoo is also staffed by– and no other adjectives really fit here– goody-two-shoes Jack Woodford and Jerry Evans. Jack is a bland but dedicated scientist and Jerry is his bland fiance and assistant. Jack agrees to try to find an antidote to the venom of the reclusive green mamba that Gorman has brought back with him; this may or may not be foreshadowing.

The mamba’s bite is deadly. Also notable will be the zoo’s alligator enclosure that features a wooden bridge crossing over it and a lever that can open all of the carnivorous animals’ cages at once. That latter feature is for use in case of a fire, though you can bet pretty good money that it won’t be used for its intended purpose by film’s end.

There are only a few deaths in the movie, but they are all stylistically nasty pieces of work. Gorman adopts using a severed Mamba head as his weapon of choice, and actor Lionel Atwell becomes a snake of a human himself, even if he fancies himself a tiger. Atwill has a theatrical flair that’s about as hammy as you can get, but it’s so sincerely over the top and backed up with such potent villainous machinations that he’s chilling all the same.

The film’s antidote to the rich man whose plotting results in the closing of the zoo are the noble biologists Jack and Jerry, scientists and champions of the working class. Jerry, despite being a woman in a horror film, even gets a chance to rescue Jack after a Gorman whips him with his potent snake head (note: not a euphemism). As Jack and Jerry, the work by Randolph Scott and Gail Patrick won’t win any awards, but it’s painless do-gooder filler.

After Atwill, though, only two other performers leave much of an impression. Kathleen Burke, whose fame from playing the Panther Woman in Island of Lost Souls was short lived, has a wonderful exotic look and a desperation to her role that makes her the most sympathetic person in the piece. Her terror is quite palpable, and even as we see quite readily that she has awful taste in men, it’s hard not to empathize.

That contrasts to Charles Ruggles’ work as Yates, the doofus press agent for the zoo, whose fear of practically every animal under the sun seems like something that he would have thought about before his job application was filled out. Murders in the Zoo has about ten solid minutes of horror, and the rest is concerned with Yates and his unhappy encounters with lions, tigers, bears, snakes, seals… all that sort of thing.

There’s a theme that runs between this and two other notable pre-Codes– the aforementioned Island and The Most Dangerous Game, which all look at humans and animals. Island and Dangerous literally remove man from civilization and show him how debased humanity can become in the face of one person’s desire to play a twisted version of God. In Island, he’s a generous God, happy to enslave his creations, while Dangerous has him as vengeful and cruel, eager to destroy an animal who happened to be in the wrong place at the wrong time.

Murders is interesting because it keeps Gorman, the self appointed God, within normal society but well above it due to his wealth and influence. He manipulates everyone coldly and coolly– which quite clearly arouses him– and views himself as the final judge and jury on all beneath him. While he may not be as diabolical or absolute as the other gods I’ve mentioned, it makes him more insidious: no one suspects that someone who appears so nice on the outside could harbor such unspeakable desires within.

And all of this again plays into Depression Era mythologizing, where the rich once seemed like decent, nice people, but that front was simply to make it easier for them to manipulate and reek havoc. If it weren’t for Jack’s well-meaning and charitable investigations, Gorman would have been free to spread his venom across the city (this one may be a euphemism).

Murders in the Zoo is by no means a flawless horror-comedy film, bumping around between two tones with impunity and with nowhere near the grace or atmosphere as the amiable Doctor X from a few reviews back. However, Atwill and Burke make the movie’s moments of horror truly memorable set pieces and demonstrate how true human predators can operate outside cages. The rest, thankfully, will fade.

Murders in the Zoo seems vastly ahead of its time, and perhaps from a different universe altogether. For the gore hounds, it’s got that unforgettable opening shock scene. It dispenses with the traditional whodunnit mystery, choosing instead to let us know right upfront how psychotic Gorman really is. Instead of wondering whodunnit, we wonder who he’s going to do next and how. It unsentimentally takes the most beautiful and sympathetic character (Kathleen Burke, who the year before had been the Panther Woman on Island of Lost Souls) and literally feeds her to the alligators. And it features some of the more uncomfortable “strange” lust scenes between a husband and wife you’re likely to see. 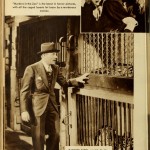 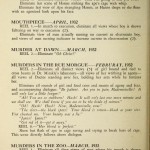