“And I suppose when the doctor comes in he’ll take out my other appendix!”

“Alum and Eve” is one of the most surreal of the non-Betty Boop shorts I’ve sat through, a short where a simple premise soon spells an endless morbid cycle of pain and mayhem for an entire hospital. The ending is especially weirdly dark and looney, but I suppose I should get to the beginning first.

Thelma and Zasu are on their way to the ocean when a cop (James C. Morton) pulls them over. Thinking fast, Thelma orders Zasu to pretend to have fainted. Thelma was rushing Zasu to the hospital, you see. The officer agrees to rush them there, thinking that Zasu is pregnant. They’re dragged to the Peaceful Valley Hospital where it’s quickly revealed that, uh, well, no. 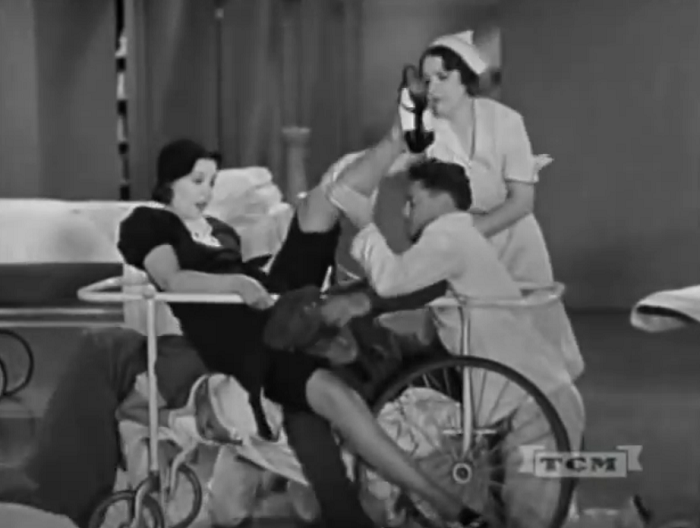 Thelma gets the inspiration to insist that it isn’t pregnancy that Zasu has– it’s rabies. Oh, that. Everyone panics since rabies is deadly and contagious, so it’s not surprising that it goes unnoticed when a jar of powdered alum falls into a water pitcher. The alum mixture renders all who drink from it numb in the mouth, which also doesn’t look too good to third party observers who are in a tizzy over a disease that kills motor skills.

“Alum and Eve” is one of the most risque of the shorts I’ve caught so far. In honor of a great tradition, Thelma loses her dress at one point and runs around the hospital in a negligee, rendering a man who is told that he’ll never walk again erect and spry. And just to allay fears that the short is unfair in showcasing just Thelma’s body, there’s also a match as two nurses try to undress Zasu for examination. She retaliates by trying to undress the two nurses. Zasu also gets poked right in the… well, it isn’t the derriere is all I’m saying. 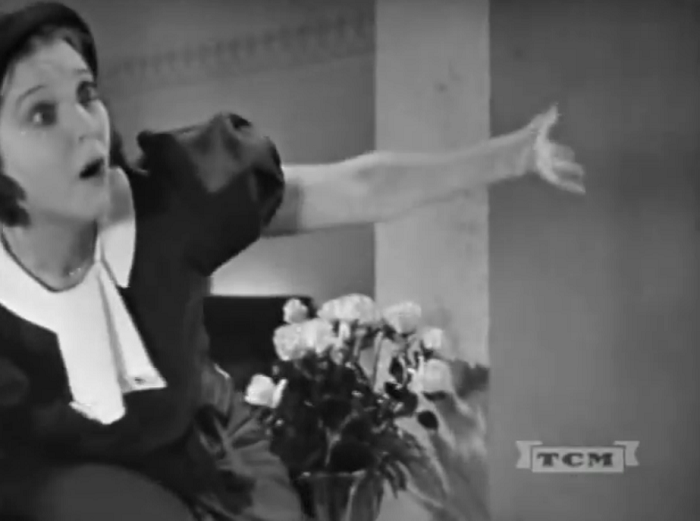 Whoops, right in the…

And, yes, I know it’s silly to spoiler a short film less than twenty minutes long. But the film’s end really is something as Zasu gets chased by the police officer until she pretends to be a dog and bites him. Zasu and Thelma, after both get a dose of alum, are held down and administered ether. Todd apparently doesn’t get enough and takes another whiff.

The police officer who brought them in drinks some alum too, and then makes the mistake of drinking some soap to try and clear his throat. Foaming at the mouth, the doctors and nurses hold him down and cover his face with ether-soaked rags too. He starts laughing madly, while Pitts and Todd escape, running down the hospital corridor in slow motion.

We all have days where this is the best possible choice.

It’s nuts! The kindly police officer who was mostly just trying to do his job and help a woman he thought was injured is going to undergo a rather unpleasant medical procedure, while Thelma, whose little white lies led to all of this, is stoned out of her gourd and making an escape to freedom. It’s a wonderfully nihilistic moment, like something out of an early Marx Brothers movie or a H.P. Lovecraft short story, where everyone is punished for a simple ruse and the madness envelops everyone, never to release them.

“Alum and Eve” is extremely madcap and fun, with Todd and Pitts getting to do some truly weird and funny material. It’s certainly the best of their team-ups that I’ve seen so far.