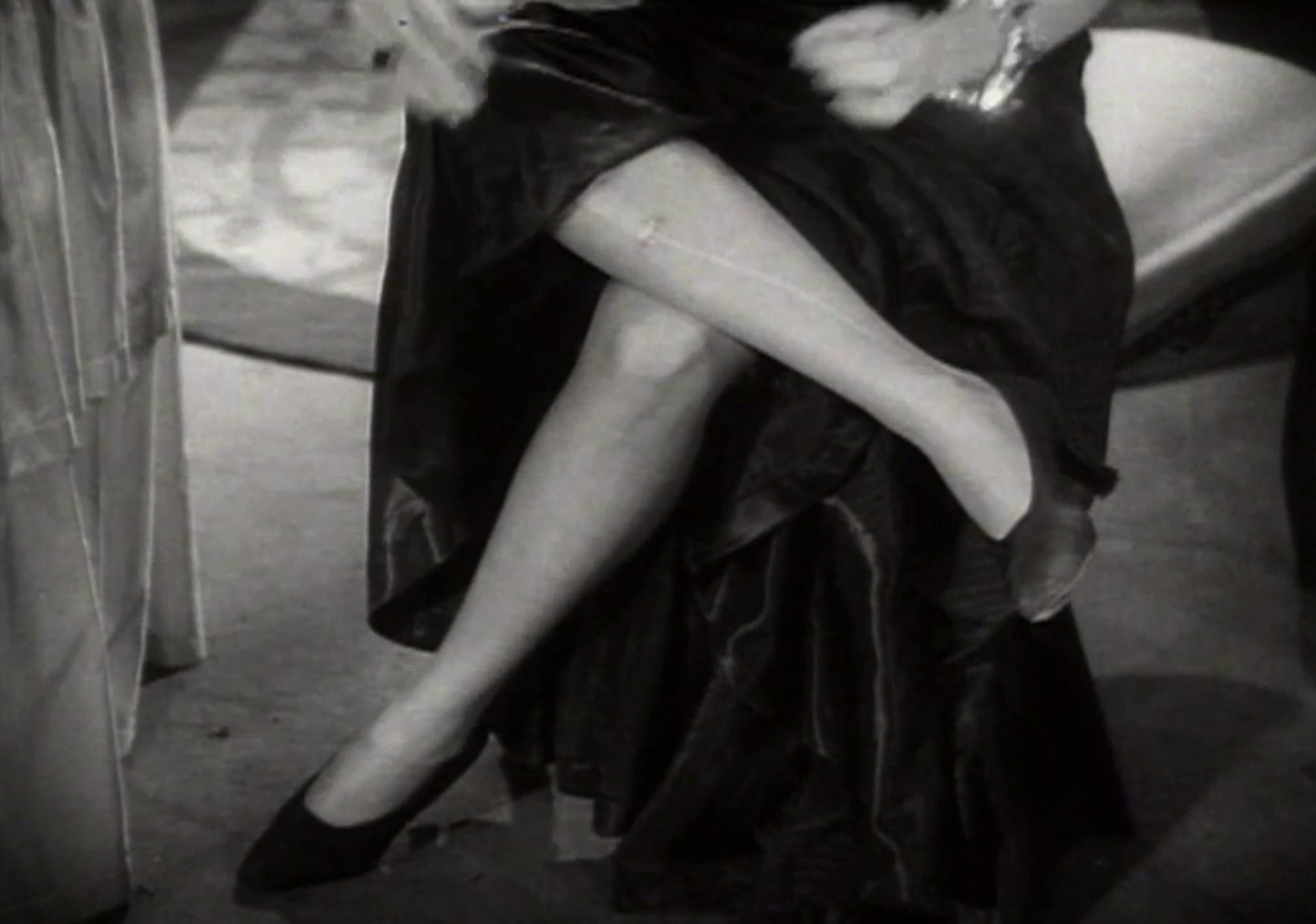 Men Call It Love: Called Out at Third

Imagine you’re attending a friend’s dinner party where her and her husband raise their hands in triumph and announce their divorce. Applause may be called for, though when you hear the most worried whispers being about where the party will be next weekend, I’ll assume your eyebrow raises. Then the couple begins to cheekily joke about their many infidelities, and it enters full bizarro world. Their divorce isn’t a mourning– it’s a celebration of how bad of a joke their marriage was.

In this world, of the upper crust whose main pleasures are money, sleeping around, and joking about it (not necessarily in that order), it’s easy for a lamb to be led to the slaughter. That lamb is new-wife Connie (Hyams), a cheerful babe who can’t even be bothered with thinking through known serial wife stealer Tony’s (Menjou) offer to teach her how to swing a golf club. She’s so in love with her husband Jack (Foster, sporting a Fairbanks Jr. mustache) that any possibility of him cheating is resolved after 30 seconds of unconvincing lies. Meanwhile, her friend Helen (Mary Duncan) lurks about, sniffing any man with a weak will and a nice smile, Jack included. 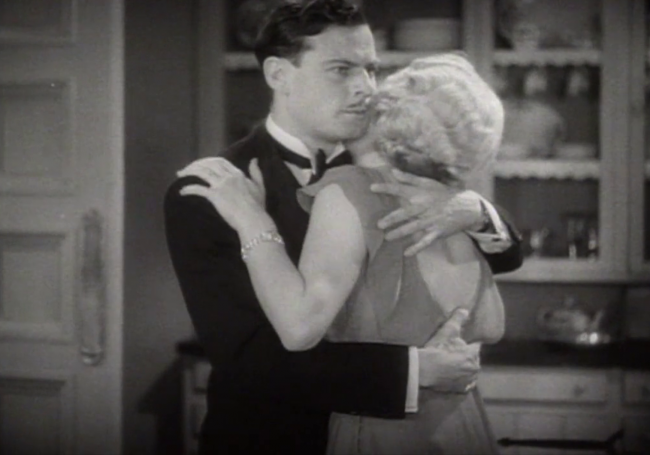 There is a real, gleeful immorality that runs throughout the film’s secondary characters. It’s a hedonistic nightmare land where a person’s marriage is about as relevant as their golf scores two games ago. The dialogue is pretty cosmopolitan. An example:

“We’ll have it for dinner!”

“Yeah! You know, that thing that comes between cocktails and cordials.”

Everyone is often drunk or drinking, and, when that fails, undressed or undressing. Connie eventually unravels the truth about her husband and almost runs away with Tony– I mean, hell, Tony is at least dressed pretty well. The moral, that good girls can keep a man so long as he grows and realizes that he needs strength to be faithful, feels a little old fashioned, especially after its revealed that Connie never strayed despite having ample opportunities to do so. 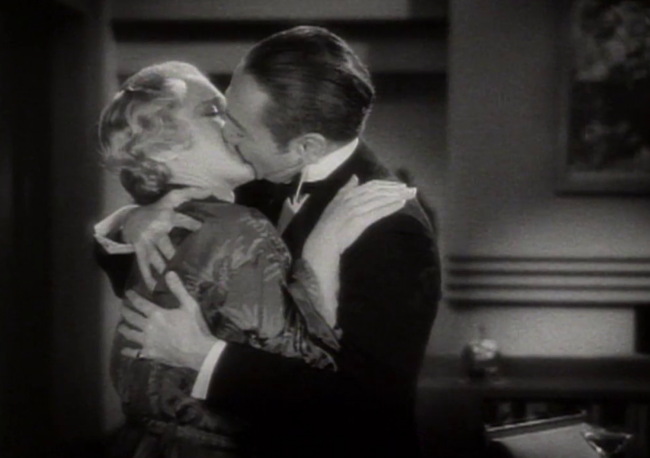 But my main beef with the film is that, plotwise, it’s The Divorcee again, only subtracting the real anger and danger that Shearer et al brought to the roles. Connie is a little too shy and sheepish, and I do think Tony’s role needed someone a bit more charismatic than Menjou calling the shots. But, again, he does dress well.

There’s a lot of cutting, flip dialogue here. Hell, the title itself– Men Call It Love— represents a sort of detached frustration with the way men use infidelity to strengthen their own egos while keeping women in check. It’s deeply cynical and still a bit unsettling however many years later, but it also feels pretty stagey and slow. Too bad.

The Warner-operated Strand is host to a Metro-Goldwyn-Mayer picture entitled “Men Call It Love,” the chances being that the lethargic seeker after warm-weather amusement will call it a number of things, none of them complimentary.

This was my first time seeing a film featuring Mary Duncan, who played Helen Robinson. It turns out that she was only in 16 films; she retired from the big screen in 1933, after she married Stephen Sanford, an international polo star and director of the Bigelow-Sanford Carpet Company, the first carpet mill in America. She devoted much of her time to fundraising activities for a number of charities and became a prominent member of Palm Beach society. Duncan died at the age of 98 in 1993.

More than a pre-Code romance, Men Call It Love serves as a kind of commentary on the state of marriage at the end of the Jazz Age. It was adapted from the play Among the Married by Vincent Lawrence, written in the late 1920s and staged in 1929–the tail end of the Roaring 20s and the beginning of the Great Depression. The setting, characters, drinking, and devil-may-care approach to sex are in keeping with the attitudes of the Jazz Age. Following the ratification of the 19th Amendment in 1920, which gave women the right to vote, the decade witnessed a loosening of social conventions, social mores, and gender roles. These changes were also due to Prohibition, in which generally law-abiding citizens flaunted the law, as well as the increased urbanization of America in which the young flocked to the cities for employment and recreation. A consequence of these social changes was the skyrocketing rate of divorce (the number of divorces divided by the number of marriages in any given year). By 1920, the rate had risen to 13.4 % from about 8% in 1910. The rate came down briefly in the early 1920s but then steadily rose throughout the decade, according to numbers found in the Statistical Abstract of the United States, part of the U.S. Census Bureau. By the late 1920s, America was gripped by a panic about the future of marriage. Contemporary newspaper and magazine articles speculated on the viability of marriage, lamenting its destruction and predicting its demise by the late 20th century. In his book Sex in Civilization, published in 1929, sociologist Samuel Schmalhausen summed up the crisis succinctly: ”The old values are gone. Irrevocably . . . We live in a state of molten confusion. Instability rides modernity like a crazy sportsman. Civilization is caught in a cluster of contradictions that threaten to strangle it.”

Lawrence’s play reflected the Jazz Age’s contradictory ideas toward marriage. While the fashionable infidelities of the main characters titillated viewers, Connie’s sincere beliefs in the value of marriage supported traditional values. Her integrity and innocence not only shamed Jack after he was caught with Helen but also influenced Tony to change his ways. Near the end, Jack calls marriage “the most sacred agreement” and laments that “with marriage, a few drinks . . . you forget every promise you ever made.”