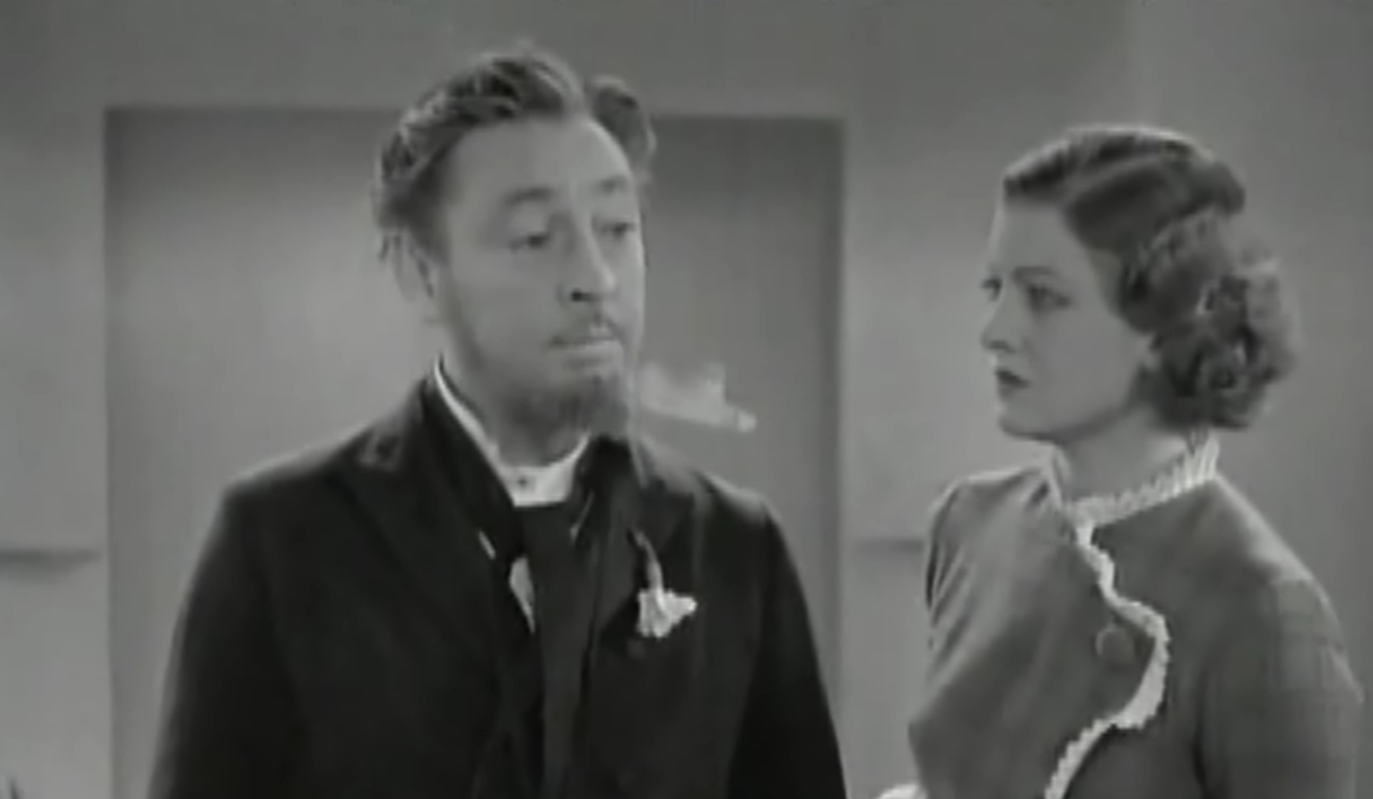 “The most frightful villainy.”

Watching Topaze, I was reminded of one of my favorite quotes from Citizen Kane: “it’s no trick to make a lot of money, if what you want to do is make a lot of money.” Topaze is full of people like that, eager to propagate old systems to secure their own power and keep their coffers flowing anew.

The title character, Professor Topaze, stands readily against it. A timid, thoughtful man, Topaze possesses a Billy Budd-like innocence in that he believes in the righteous forces of the universe that exist to punish the rich and greedy. He teaches as much at his exclusive academy, grooming a class of unruly boys to be the next leaders of industry– well, all except for the little Charlemagne de La Tour-La Tour (Jackie Searl), who persists in ignoring his lessons and making noise throughout. Refusing to give the boy exemplary marks, Topaze is fired from his position. 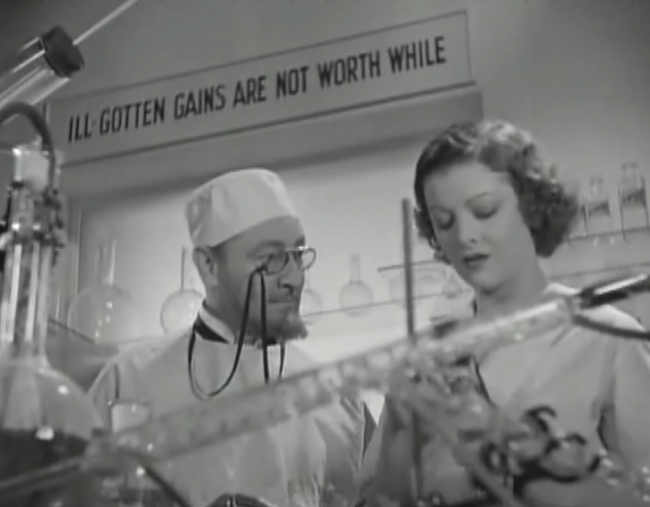 Through a stroke of odd fate, he’s then hired by the boy’s father Phillipe and paid handsomely to endorse a new water curative called Sparkling Topaze. The drink is crap, however, actively being worse for you despite the massive ad campaign promising it as a tonic. Topaze is duped into believing his truly healthy (but costly to produce) version is being sold to the public until a blackmailer arrives to accuse Topaze of being a thief.

Realizing he’s been complicit in this injustice and rewarded– not just monetarily, but with academic honors– Topaze sees no choice but to embrace it. He blackmails La Tour-La Tour into owning a chunk of his conglomerate, and then, just to please himself, goes back to the school he was fired from and humiliates the man’s son to prove how morality can triumph over corruption– at least in a classroom setting. Topaze then hooks up with La Tour’s mistress, Coco (I mean, why not), and the two head to the theater for a performance of a play called Man, Woman, and Sin, the idea being that Topaze has, at last, embraced all that is good in life and everything in between. 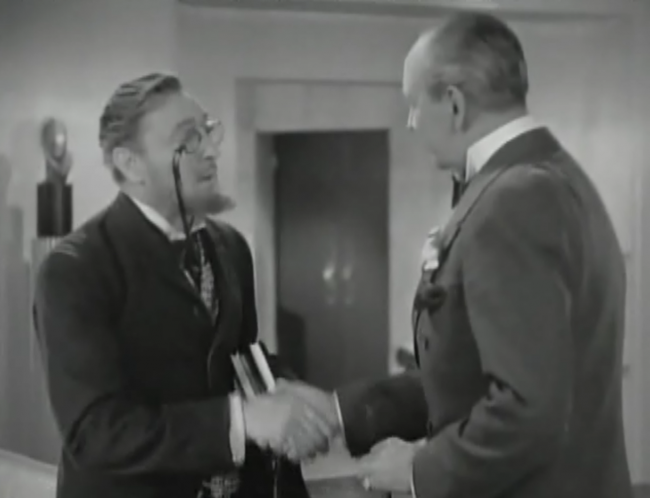 Topaze may contain one of Barrymore’s most restrained performances, giving a quiet, anxious study of a man who is an intriguing mix of naivete, idealist, and still kind of likable. He’s instantly given everything he desires as soon as he’s willing to sell himself out, even though he’s unaware he’s doing so. With Topaze’s world opened up to him as he discovers La-Tour La-Tour’s deception, the movie becomes as bleak of an indictment of adulthood and capitalism as you can get. Once you’re corrupted, there’s no turning back. And no punishment, either. La-Tour La-Tour is merely humiliated, while Topaze prospers.

Topaze may be worth watching for its overwhelming embrace of amorality. It starts from the opening gag, which makes La-Tour La-Tour and Coco seem like the ideal couple before their illicit relationship is revealed, to the final walk towards the sin-promising theatre. I did enjoy the actors and the film’s ideas, but it’s difficult to get through, as any movie that climaxes with a grown man gleefully embarrassing a small child, might. The movie embraces a bitterness that sees idealism as useless outside of academia and points out that even a simpleton like Topaze can realize that the system is rigged– better to exploit it than come to ruin any other way.

It was during his tenure as Vice President in Charge of Production at RKO (1931-33) that David O. Selznick solidified his reputation as a producer of uncommon taste, imagination and ambition. One of Selznick’s most impressive talents was his knack for finding just the right vehicles to bring out the best in performers. Among his triumphs in that regard at RKO were casting Katharine Hepburn in her star-making role in A Bill of Divorcement (1932), signing Fred Astaire to appear in film musicals and tapping into the comic talents of John Barrymore and Myrna Loy in Topaze (1933). 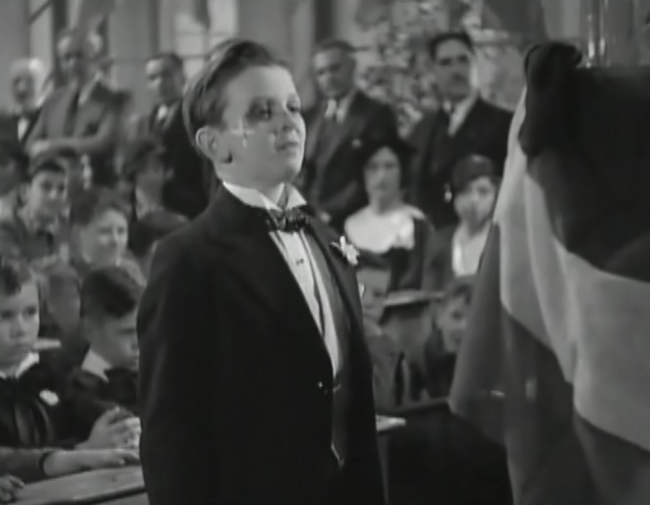 Barrymore was still capable of a controlled performance at this point, not long before his descent into alcoholic self-parody. He’s fully committed physically to Topaze’s eccentric mix of meekness and pretension, setting up the contrast with the more forceful character the professor will become. A character actor in a star’s body (that he soon strove to destroy), he seems comfortable in makeups and odd voices, reminding me of Hans Conreid sometimes during his orations before toning it down later. People who saw both him and Frank Morgan seemed to prefer Morgan, but Barrymore is very entertaining in the role. D’Arrast directs him well, his moving camera allowing the actor to define his character through movement as he paces up and down classroom aisles. His fondness for lateral camera movement helps keep the whole film lively.

Myrna Loy is surprisingly ineffectual as the vamp turned lab assistant who helps Topaze switch careers from chemistry to blackmail. It is hard to believe that Loy was less than a year away from The Thin Man and that a supposed comedy would make so little use of her talents in that genre. As the notorious Coco, she’s mostly required to look worldly in Chinese pajamas (Loy got her start in Hollywood playing the “Asian” exotic) which she trades in for a rather chic lab coat for the second half of the film. She develops a sweet platonic friendship with Professor Topaze and eventually chooses to go to afternoon matinees of tawdry movies with him over more lucrative meetings with her married lover.