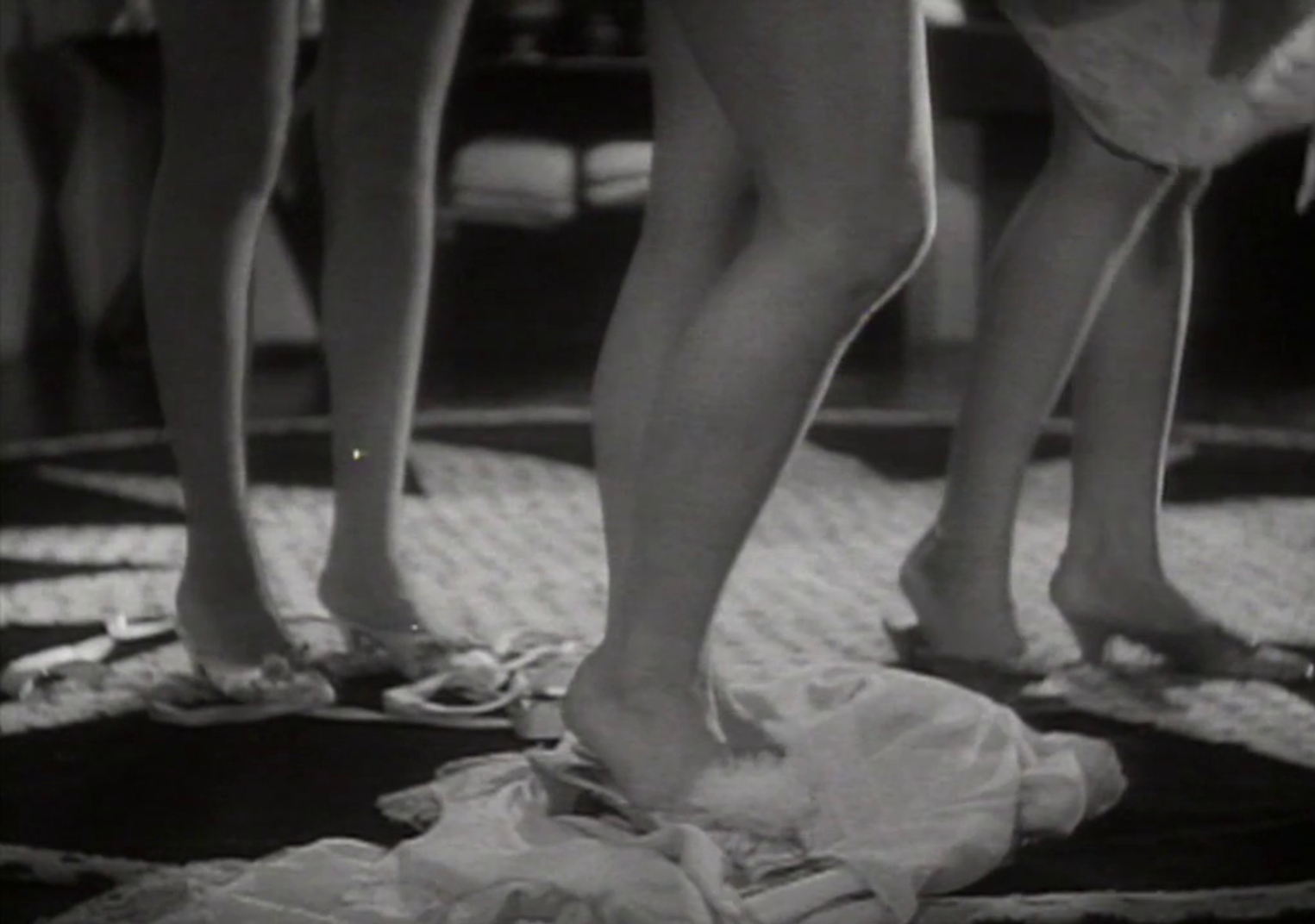 “You girls do overdo things, don’t you?”

Those Three French Girls is, basically, linguistically ridiculous. There are seven main cast members: the three French girls, two guys from whichever New York burough gives you a cartoonish accent, and two British men who toss off “Greetings and all that rot!” and “Tally ho!” like the screenwriter was drawing from a dictionary of cliches.

An early talkie, it’s not specifically static, but the film suffers from a distinct lack of imagination. Here you have dandy and stereotype Larry who is one day puttering around France. He finds three scantily clad French girls giving the good news to their landlord, who is yelling straight back. Larry, of wealth, breeding, and the ability to get out of jail fairly easily, heads up to the girls and suggests they add flowerpots in addition to words in terms of what they’re throwing.

The four end up in adjoining cells, and Larry is soon joined by Yank and Owly, a pair of comics who are in France due to a heavy dose of nostalgia from their time in the war. Mostly they’re there for really broad and brash comic relief. Comedian Cliff Edwards was famous for his ukulele skills, and they’re here in full force–  we get a full song called, “There’s a Lot of Charming People You Can Meet in Jail” and a few others, all of which I wouldn’t recommend listening to sober.

A half an hour in and I was still wondering just where the film was going, but it turns out, after a night spent in a barn, that the three French girls are desperate to open their own clothing boutique, and Larry’s rich uncle is happy to oblige if it means snatching Charmaine away from his nephew. Larry and Charmaine feud, but you can rest assured that true love wins out just as much as that ukulele keeps popping up.

While the movie does have a murderer’s row of racy content– with that title, you kind of had to– it’s all presented rather plainly. There are laughs intermittently, but the performers are really rough. The girls are all bland. Canadian Fifi Dorsay, who is top billed here, spends most of it with a pout and glare. She lacks any magnetism, and while she and Denny can exchange looks, that’s about the extent of the love story. Denny is playing British to the point of parody– he’s hard to take as reality let alone seriously. Meanwhile, Brophy and Edwards, who had a solid career as comic relief separately, prove that it’s probably for the best that their futures were separate.

It’s pretty dire stuff. It’s both complicated and not, amusing and not, trying and not. The movie lacks a surface level charm, feeling like a community theater production. The conflict is facile, and the comic relief just annoying.

The main attraction for the film would have to be for anyone who’s ever casually wondered, “Are those MGM sets cavernous enough to drive a car on?” and the answer is yes. Yes they are. If you don’t know or don’t care about that very idea, I wouldn’t go out of your way to track this down.

There is the light fun of P. G. Wodehouse, who is responsible for the dialogue; the contrasting low comedy of Cliff Edwards, who plays the rôle of an individual answering to the sobriquet of Owly; the Anglican drollery of George Grossmith, who appears as the Earl of Ippleton, and the French streak of amusement contributed by Yola d’Avril, Fifi d’Orsay and Sandra Ravel. This incongruous mixture earned its reward of hearty laughter from an audience yesterday afternoon.

Frivolous confection co-written by P. G. Wodehouse, of some interest for song and dance interludes by Edwards, but mostly for pre-Code views of the young ladies revealing their frilly lingerie as often as possible.