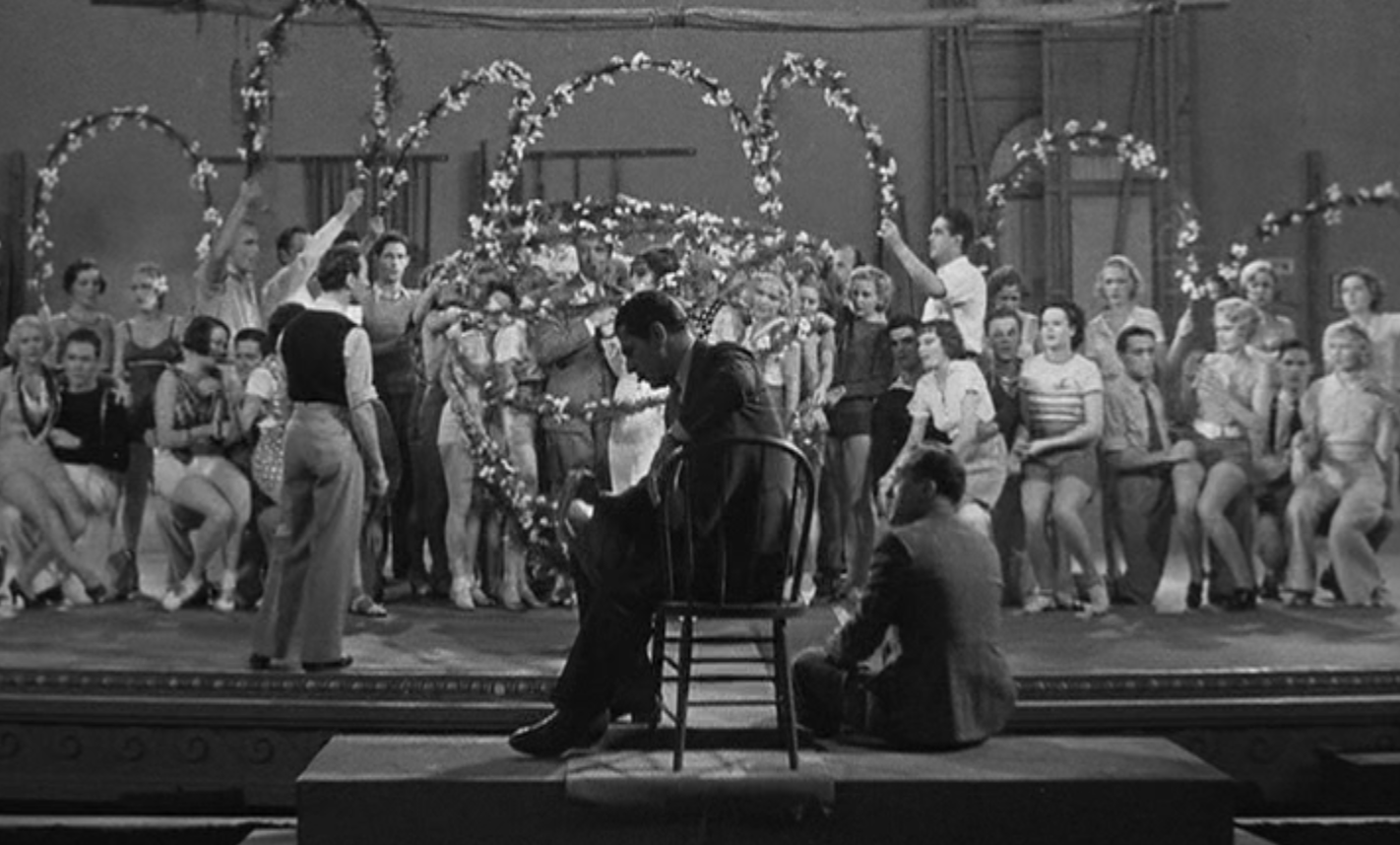 42nd Street: Coming Back a Star

“All right, now, everybody… quiet, and listen to me. Tomorrow morning, we’re gonna start a show. We’re gonna rehearse for five weeks, and we’re gonna open on scheduled time, and I mean scheduled time. You’re gonna work and sweat, and work some more. You’re gonna work days, and you’re gonna work nights, and you’re gonna work between time when I think you need it. You’re gonna dance until your feet fall off, till you’re not able to stand up any longer, but five weeks from now, we’re going to have a show. Now, some of you people have been with me before. You know it’s gonna be a tough grind. It’s gonna be the toughest five weeks that you ever lived through! Do you all get that? Now, anybody who doesn’t think he’s gonna like it had better quit right now. What do I hear? Nobody?! Good… then that’s settled. We start tomorrow morning.”

As soon as the title pops on screen, I’m hooked. 42nd Street wasn’t the first backstage musical, but it’s one of the most iconic. Between the snappy numbers to the crackling dialogue to the Busby Berekely choreography finally put front and center in a way it never had before, 42nd Street feels distinctly different not just from other musicals that had been made up to that time but from most other movies. It’s messy but grand and has a lived in quality that would soon become found in most prestige pictures later in the decade.

It’s an interesting mix, this roughness with ambition and glamour. Its closest relatives (and I’m going to catch flack for this, oh yes) are Little Women and Counselor at Law, prestige pictures that similarly were at complete ease with both sound and complex character work. In 42nd Street, our heroes stuck in a competitive, grueling world where audiences will just as soon spit at you if one piece of an entire production is rejected.

So they ponder, fight, hope and plead. A Broadway show stages auditions, rehearsals, and then has that fateful opening night. Everyone ends up happy, which is astounding even though it shouldn’t be a surprise.

42nd Street is the story of young Peggy Sawyer, an inexperienced chorus girl desperate for her first shot at fame. In what may not have been a pure coincidence, she’s played by screen newcomer Ruby Keeler. Both Sawyer and Keeler are a bit wooden, but they have spunk. She makes it into the show thanks to a counting error and the help of a pair of wiseacre friends, Lolly (Merkel) and Annie (Rogers). She works to exhaustion through tryouts and despite several suitors trying to steal her attention, including sweet Billy (Powell), bully Terry (Edward J. Nugent) and mysterious stranger Pat (Brent).

That last one figures into the overall plot, as Pat is secretly the old vaudeville pal and lover to the play’s lead, Dorothy Brock (Daniels). But Brock had arranged financing thanks to the donations (and implication-filled leers) of Abner Dillon (Kibbee). The film’s director, Julian Marsh (Baxter), has already suffered his fair share of nervous breakdowns and financial disasters over the years, and he needs this one last shot to both refill his empty coffers and to redeem himself– if not to the audiences, than to his own belief that he can overcome such daunting challenges to succeed. Of course, when it looks like Pat might get in the way by angering Dillon, there’s not much Julian won’t do to save his show…

The movie feels startlingly fresh. The themes– perseverance in the face of insurmountable odds, overcoming a great darkness — are still relevant, while the backstage pathos of crossed hearts and steely determination boil. In fact, so much of what’s seen in 42nd Street has become cliched since its release, that its climactic moment, when Peggy is about to make her star debut with the entire production riding on her success, that Warner Baxter’s impassioned speech imploring her to succeed elicited chortles from the audience I last saw the movie with. Fuck those guys.

This was the first Warner Bros. movie for Busby Berkeley, a famed Broadway choreographer who’d worked with Samuel Goldwyn on transposing some hits from the stage, mostly starring Eddie Cantor. With the ugly death of the musical in 1931, improvements in sound technology and camera mobility meant that within a year they could be more streamlined experiences. But they needed imagination. 42nd Street gave the camera as much leeway as the minds eye, using it as a dream generator in ways that hadn’t been captured since the silents. This revived the musical in a big way and made it an institution.

It helps that the ability to dub dialogue helped make the musical transitions more seamless. The main themes haunt the film as background music throughout, giving the whole movie a sense of rhythm and flow that talkies couldn’t accomplish before. If there’s one major flaw in 42nd Street, it backends its major musical numbers. They’re knockouts, for sure, but so visually overwhelming and energetic that it almost makes you forget the rest of the film. The big production numbers, “Shuffle Off to Buffalo”, “Young and Healthy”, and “42nd Street”, are still stunning seen today.

They’re playfully tongue-in-cheek. “Shuffle Off to Buffalo”, which details a bride and groom taking a train ride to their honeymoon, is the first of the numbers to showcase Berkeley’s desire to push the on-stage play past the point of reality. The train compartment opens up before our eyes to a seemingly impossible size. Things are kept grounded here with careful shots of the orchestra and audience, though the closeups and coordination is probably beyond your average stage play.

A nice moment during the number happens when Rogers’ Annie almost misstates a song lyric– even though the one she almost sings actually fits in better with the music. Merkel’s reaction is excellent, and really serves to remind you that what you’re seeing is still a performance of a performance.

“Young and Healthy”, which is an ode to sexual virility, is done in a completely black environment, utilizing rotating platforms and streamers. It’s the most geometric of the numbers and, while rudimentary compared to Berkeley’s later excess, is nothing less than a visual treat as both the boisterous Powell and the beautiful, silent Toby Wing are treated to a bevy of suitors and the whirlwind workings of the stage. Berkeley still cuts back to the audience at several points to set what’s happening in film-reality, but the camera catches much of the action above, adding another layer of visual beauty to the affair. It’s sleek and deco in the best ways, and remains a benchmark for the early 30s cinema.

The last number is the one where Berkeley finally slips the surly bounds of the stage and really kicks the audience in the pants. The rollicking tribute to New York and the “bawdy, gawdy” characters of 42nd Street kicks off with Ruby Keeler’s controversial tap dancing (“All I’m saying is that I’ve never seen another tap dancer stare at their feet quite so much,” one friend noted after I defended Keeler) and soon all of New York seems contained within the stage. I love the way Berkeley still blends stagy elements in this number– like the painted backdrops– with the pans and choreography which takes the dance past reality. It becomes a live action cartoon in the best sense of the word.

Of course, it’s not a cartoon such that it lacks complexity. The portrait of New York includes people from all walks of life, from a drunkard who hallucinates a wooden Indian dancing to the nurse who spanks a baby in time with the number’s beat. There are colored kids dancing for coins and a pair of immigrant fruit sellers who are late for their tee time. It’s not hoary platitudes about New York, especially in the bit that involves an abused woman being murdered while a cynical Powell toasts her from a nearby speakeasy. The upbeat melody views humanity at its wildest– embodied in New York itself– but embraces all of that as if it’s necessary for the human experience. The world’s a nutty tapestry; celebrate it.

(Brief side note: many people burst out into laughter at the end of the number when Powell and Keeler pull down a curtain marked ‘Asbestos’. Asbestos nowadays is pretty much solely associated with killing people, but back in the day it was used in, yes, stage curtains in case a fire got out of control. And, as another source noted, it also indicates that whatever is going on behind the curtain between the two stars must be pretty hot.)

The film maintains that creativity is an act of outrageous commitment, moral compromise, degrading sexual abuse, exhausting work, and the ever looming danger of humiliating, devastating failure. But it’s also satisfying, even if no one understands what you put yourself through– the miracle of accomplishment is enough.

Of the four great Warners pre-Code Busby Berkeley musicals– I’m talking Gold Diggers of 1933, Footlight Parade, and Dames here— 42nd Street is probably the least fantastical and the most dated. It’s the closest to reality in spite of its fantastical elements, where the latter films would use reality as simply an accent piece. Here it’s waylaid spectacle, which is wondrous in its own way. It’s one of those magical movies that elevates you, but also makes you mourn a bit. There’ll never be anything quite like it again.

In a number called “Shuffle Off to Buffalo” in the 1932 Broadway musical “42nd Street,” Ginger Rogers sings “He did right by little Nelly / with a shotgun at his bell-” and then interjects “tummy” instead. “Belly” was considered a rude part of the body to refer to; tummy was OK because of its association with children.

Broadway is used as a metaphor for what makes America great. Some of the management decisions are unjust (Abner Dillon expecting favors for his money) or crooked (Pat Denning threatened by gangsters). But down in the trenches, the hard-working performers rehearse their hearts out to produce something great. Sassy Lorraine and Anytime Annie trade cynical one-liners but when push comes to shove, Annie knows what’s best for the show.

It is a film which reveals the forward strides made in this particular medium since the first screen musical features came to Broadway.