The Lawyer’s Secret is a dull little affair centering on a wrongly accused man and an accomplice who refuses to come forward. The wrongly accused man is Joe (Arlen), a navy man who left his gun behind which was used in a robbery. The accomplice is Laurie (Rogers), who is Kay’s brother, and she’s engaged to the dapper and stoic lawyer Drake Norris (Clive Brooks, for whom ‘stoic’ is pretty much a given).

Norris finds out that Laurie was involved in the stick up and murder, but Norris can’t reveal it because of lawyer-client confidentiality (hence the titular secret). This leaves Joe’s fiance, Beatrice (yes, that Jean Arthur), and his navy buddies as the only ones who can hope to find out what really happened that night in the gambling parlor. 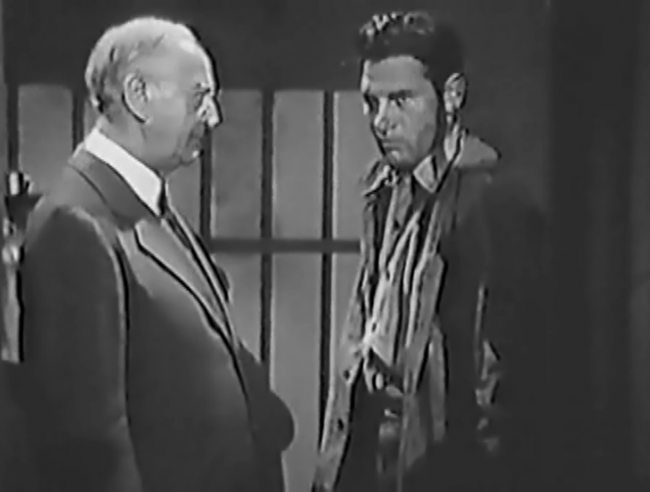 There isn’t a whole lot to say about the picture, which starts slow and gets slower. Arlen, Brooks and Wray are all okay, but nothing exceptional. Rogers, as the tormented young man, just seethes in secret, making his character pretty dull. And this is not Jean Arthur’s finest hour by a long shot– her character’s reactions are sometimes outright baffling in the context of the movie, smiling broadly as her fiance is on trial for his life.

The real problem is that the story has been done hundreds of times over the years, and there’s no characters or more than a shred of wit to spare here. Norris’ inner conflict– whether to break his principles to save an innocent man– are hardly tested, as the solution lands on his lap rather through any actions of his own. What could be a real nail biter just sort of ends up hollow.

The Lawyer’s Secret looks dull, and even the cast can’t generate much interest. Too bad.