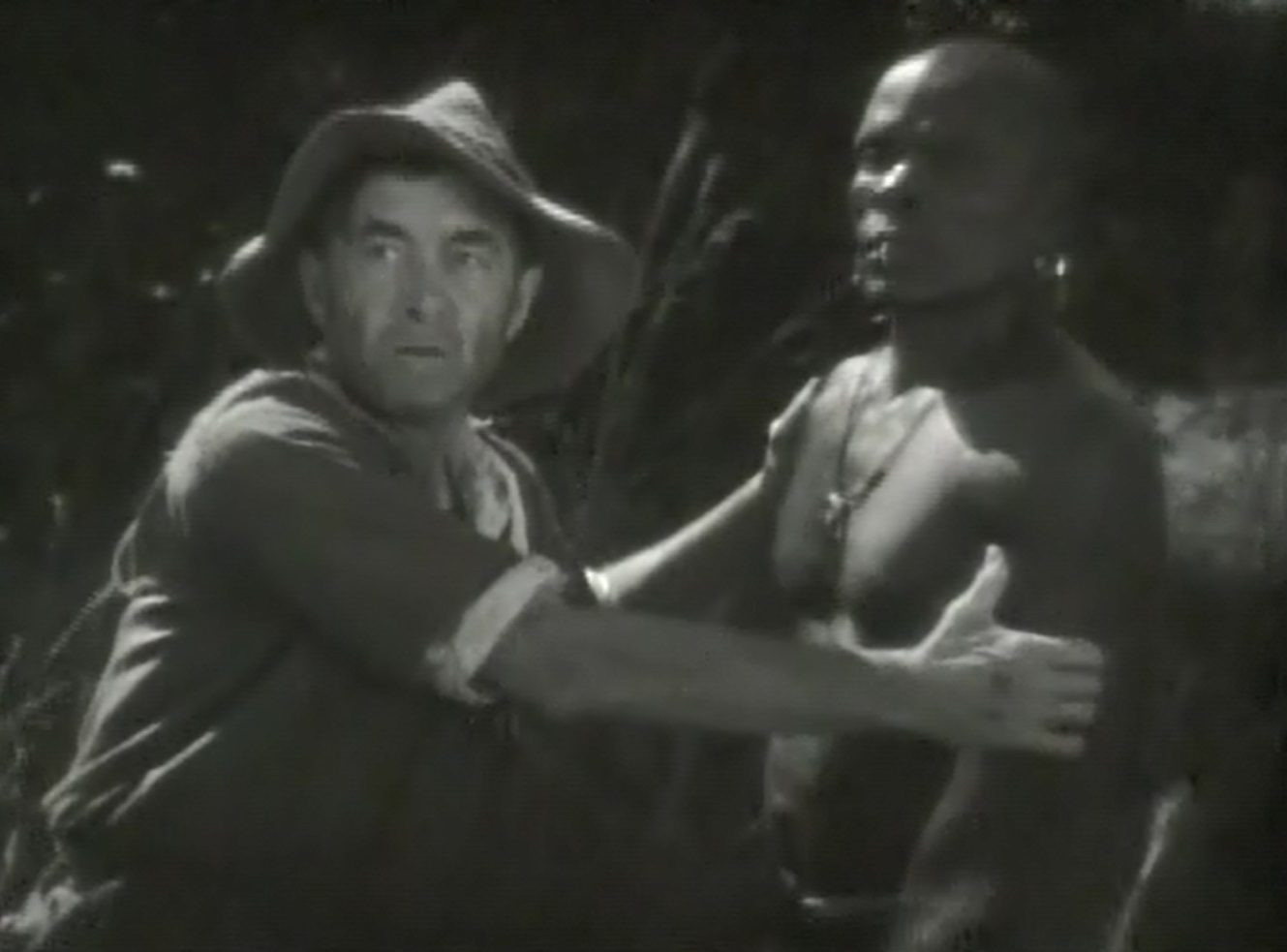 “You needn’t think there isn’t beauty to be found in Africa… Beauty and terror. Terror can be a sort of beauty, too… if two fellows stand up to it together. … sometimes, of course, it’s better for two fellas to run away together!”

For today’s entry in the ‘It Sure Hasn’t Aged Well’ category, here’s Trader Horn, an adventure movie set (and spectacularly mostly filmed) in the wilds of Africa. It’s a work of spectacular testament to effort– two men died during the filming of the movie, and they weren’t the only casualties– but it also serves as an affront in many regards. This is Hollywood xenophobia at its most self-congratulatory, showing off the vast, mysterious world while wagging a finger at it all the same though plot machinations and clear cut bigotry.

Trader Horn (Carey) is an ivory trader. He’s taking his dead partner’s kid, Peru (Renaldo), with him on his first mission and to show him  the ropes of the continent. While out, they meet up with the feared missionary Edith Trent (Harry Carey’s wife, Olive), who has found that her long missing daughter might be in the hands of a distant, mysterious tribe. The two men set off along with their trusted gun bearer, Rencharo (Mutia Omoolu), to find the girl, only to find themselves unarmed and hunted through the wilds of Africa.

At over two hours, the movie is a lousy combination. With the introduction of sound, the filmmakers are happy to pad the film out with what is essentially a full hour of documentary footage clumsily combined with actors. Much of Carey’s narration here makes it feel like a very much extended “Fitzpatrick Travel Talk”, which combined peppy quips with exotic locations. It gets tiring fast.

The film’s second half becomes a more standard adventure tale, though we still pause to talk about wildebeests and fight some unpleasant lions. (And, in one moment that further dates the movie, we see one stabbed with a spear and then watch it enter its death throes.) It’s a step up because at least it’s interesting, which is something.

The acting in the film is the real bugaboo. Carey is fine in the title role, pulling off a decent Will Rogers-esque part with charm. Unfortunately, Duncan Renaldo is the Cousin Balki of the proceedings, his accent and naivete making you wonder less about the kid’s education but also his mental health. Edwina Booth has a lot of heavy lifting to do in a part that makes her fierce up until she sets her sights on some white dudes and becomes almost instantly incompetent. She manages.

The relationships in the film are a bit murky. Horn obviously feels paternal for Peru, but both men, upon seeing Nina, the goddess, with her strategically glued-on fur pom poms, get kind of stupid. A bit of a triangle forms, though Carey doesn’t seem too into it.

And I suppose I should talk about the film’s racial politics, mostly because they’re awful and they’re impossible to ignore. Much of the film is a lesson to young Peru about how to treat and interact with Africans. They enter one tribe early on and he sees them giggle and flirt. Peru exclaims:

Of course, Peru is quickly corrected when Horn points out a nearby skeleton tied to a stake. The movies summation of native Africans is ‘dumb but deadly’, which is pretty shitty overall. Keep in mind, for a film that was actually filmed in Africa, the filmmakers kept this attitude and still managed to get cooperation from the tribes they filmed.

The racial undercurrents view Africa as treacherous, nasty, and unconquerable. Horn cries out, when the love triangle threatens to pop, “Don’t you understand? White people must help each other!”

The only exception here is Renaldo, Horn’s gun bearer who understands English but doesn’t seem to speak it often. I think he knows he’s better than it, or least that’s how I’d have played it. He’s loyal to Horn to a fault– or his death, in any case. While this is certainly an early cinematic example of the black sidekick getting killed to up the stakes for the protagonist, there’s still a tearful moment at the end where Horn sees Renaldo’s ghost appear in the sky. Considering how often these characters get out and out forgotten, this is a nice touch– kind of weird, somehow, but nice.

It really doesn’t correct all the other ugliness. This is pulp fiction that propagates and sanctifies white ignorance for thrills over empathy. And there is a lot of just standing around talking too. Geez.  I mean, let’s get a move on.

A private detective journeys to Africa to find a legendary white gorilla. The gorilla turns out to be an escaped Nazi war criminal.

A January 1930 AC article notes that the film was nearly half completed when the studio informed the crew in Africa that Hollywood was sending a sound crew to meet them. They were told that “the world was demanding its pictures all-talking.” According to an April 1931 Photo article, M-G-M secretly sent a second unit to Tecate, Mexico, away from American laws that secured the ethical treatment of animals, to film scenes of animals fighting with each other, which they were unable to capture on film in Africa. In Mexico, lions were reportedly starved for several days in order to ensure immediate and particularly vicious attacks on hyenas, monkeys and deer.

Van Dyke was assigned to work with and wound up displacing the pioneering documentarian Robert Flaherty on the 1928 Tahiti-set adventure “White Shadows in the South Seas” (previously reissued by Warner Archive). He followed up with a second Tahitian romance, “The Pagan” (1929), a vehicle for Ramon Novarro, and then MGM’s most elaborate location-adventure to date, “Trader Horn” (1931). Shot over seven months in four central African colonies, the movie required what has been described as the largest safari on record (some 35 travelers and almost 200 indigenous people, and 90 tons of equipment) and copious infusions of alcohol. One crew member was eaten by a crocodile and another trampled by a rhino.

But the role of the missing daughter turned tribal leader required a more unorthodox method of casting. On the day of the screen tests, thousands of blondes lined up to vie for the part. Worried they didn’t have enough negative to test them all, Van Dyke decided to drive by in a camera car pretending to shoot them all, only committing to a few he found promising. The young Miss Booth saw what was going on, assumed there was no film in the camera at all, and became enraged. She made a scene, protesting right to Van Dyke’s face, and took off across the lot with the director in hot pursuit. Van Dyke knew he had found the right girl for the part!

But the difficult production aspects of Trader Horn continued to haunt some cast and crewmembers for several years, particularly Edwina Booth. She was plagued for years by rumors that she had contracted a fatal disease on location as a result of either the “malarial environment” or witchcraft. In reality, Miss Booth did sue MGM after she came down with an illness, which she blamed on the fact that the studio insisted she sunbathe in the nude, and failed to provide her with adequate protection from the environment. The suit was settled out of court, and Miss Booth retired from the motion picture business after teaming up with Harry Carey in two subsequent films.