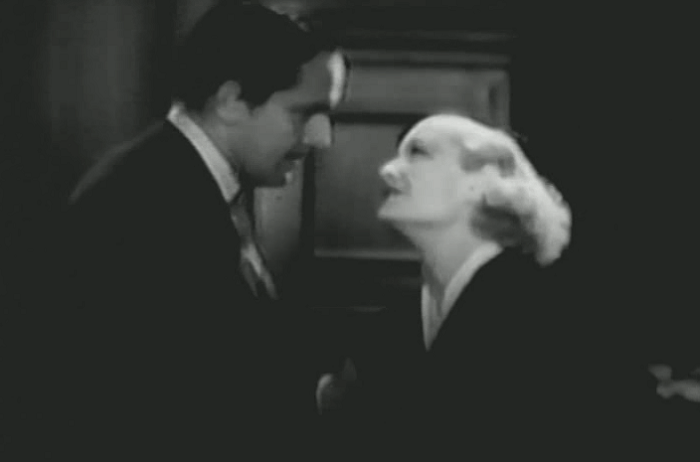 All of Me: Less Than Advertised

There’s something desperate and yearning to be said in the ways that we love each other. No two love affairs are built the same as circumstances and affections can easily trouble the water.

All of Me seeks to explore those murky areas between two people, but instead functions as a dramatic exploration of bad plotting and incomprehensible character decisions. Watching the film is something close to watching a slow-motion car wreck, where every glaring mistake is underlined and bolded.

That’s probably surprising considering the talent in front of the camera is fairly exquisite. Miriam Hopkins and Frederic March had costarred together in two undeniable pre-Code classics, Design for Living and Dr. Jekyll and Mr. Hyde, and seem set up for greatness again. All of Me begins with the two of them sharing a cigarette at night under a beautiful night sky. The circumstances shortly reveal him to be an enthusiastic young engineering professor while she’s the only woman in his class.

March’s Professor Don Ellis gets a call to see the dean. His application to go help design Boulder Dam out in Nevada has been approved, and you can see the joy dancing in his eyes. Hopkins’ Lydia, who apparently went and watched Illicit one too many times, is terrified that marriage kills love and refuses to join him. Their date to celebrate their last night together turns into a dirge as both desperately try to find an emotional escape past his dream job and her emotional reluctance.

Luckily (?), that night they run into a downtrodden couple, Honey Rogers (George Raft, Scarface) and Eve Heron (Helen Mack, Kiss and Make Up). Eavesdropping in a bar, they learn that Honey is a criminal trying  to go straight while Eve is his devoted lover, preparing for the arrival of their first child. The pair catches them eavesdropping, though, and Honey snatches Lydia’s purse with her tacit approval. Desiring to do something along the same lines, Lydia steals Eve’s story and tells Don that she’s pregnant.

As you can imagine, the ruse doesn’t go over very well, especially when it’s disproved so quickly and Lydia uses the occasion to brag about how well she’s got Don wrapped around her finger. When he realizes that she’s a spoiled brat who wants what she wants and will manipulate him to get it, he leaves her. She’s heartbroken.

And now the goofiness truly begins.

There were a lot of places All of Me could go from here, whether following Don to the spectacular task of building Boulder Dam to having Lydia explore her emotions, even if that meant engaging in a new love affair. Hell, just having the two reunite years later for the third act might have brought some interesting sparks, seeing how their ideas of love and intimacy had changed in the intervening time.

However, the goofiest third act they could have got is the one that they went with. Lydia gets a letter from Eve begging for help. Honey was put in prison and Eve in a correctional home because he started a fight while on parole and she’s unwed and pregnant. Through carrying messages between the two, Lydia becomes complicit in helping Honey escape from Rikers Island and spring Eve from the home. They go on the lam– Honey is wanted for murdering a prison guard during his escape– and dreary romantic drivel is all that Honey and Eve can pour out, with Lydia just watching their lower-class fantasizing with a hardened look on her face.

Hopkins– strike that– no actress could play Lydia’s part here, a person who must be a holy soldier, standing selflessly to give this irritatingly perfect lower class couple every ounce of her devotion. The title of the play the movie was based on was “Chrysalis”, and while we’re supposed to be seeing Lydia learn about what true love really is, it comes across as so blunt and so hopelessly romanticized that it’s not teaching her anything but the blue end of the melodrama spectrum.

The film’s ultimate truth, that the flighty rich could take a lesson from the troubled poor, is, as presented, completely fucking ludicrous. If Lydia hadn’t agreed to help Honey escape, he never would have killed a man. Her complicity actually dooms the two; with the three trapped in a high rise and the police banging on the door, Honey decides to jump rather than meet the electric chair. Eve follows, unable to imagine a life for her or her child without Honey.

This level of devotion moves Lydia, and it moved me, too, though that was much closer to ‘dry heaving’ than feeling emotionally connected in any way. Lydia returns to Don and they promise to start again. For all of the film’s speechifying, the end is thankfully brief.

All of Me may just be a key example for showing when actors are better than the material. Hopkins plays flighty schoolgirl perfectly, even if her character’s twists are too implausible to reckon with. March (in a rather unfortunate mustache) is probably the highlight of the film, which is worrying since he disappears about halfway through. He does get the film’s best scene where, upon seeing Lydia’s upper crust house, he can’t resist his curiosity and begins to count off his steps to determine how big their massive living room is. Raft (who I’m beginning to wonder if he had a contract stipulation saying he had to break out of prison for every movie he was in) is rather nicely subdued for the most part, as he and Mack have a gentle chemistry, allowing their character’s affection for one another to work better than their dialogue.

Unfortunately, there’s not much to say about director James Flood, the film’s pace, the film’s look, the film’s soundtrack (other than there is none), or much else. The film is a long series of speeches, and while some may pique curiosity, much the rest of the film works to dull every interesting thought or moment that arises.

I do normally try not to spend so much time on dry plot recitation (and before any snarky comments pop up below, note the keyword is try), but understanding the gist of All of Me requires that understanding the how the plot careen off the rails. Its finale is emotionally manipulative and completely hollow– a ludicrous paean to the poor and unfortunate that wallpapers their emotions with platitudes, while ditching the first 2/3rds of the film in an attempt to teach a lesson. This movie is an baffling disappointment on every front.

2 Replies to “All of Me (1934) Review, with Miriam Hopkins and Frederic March”