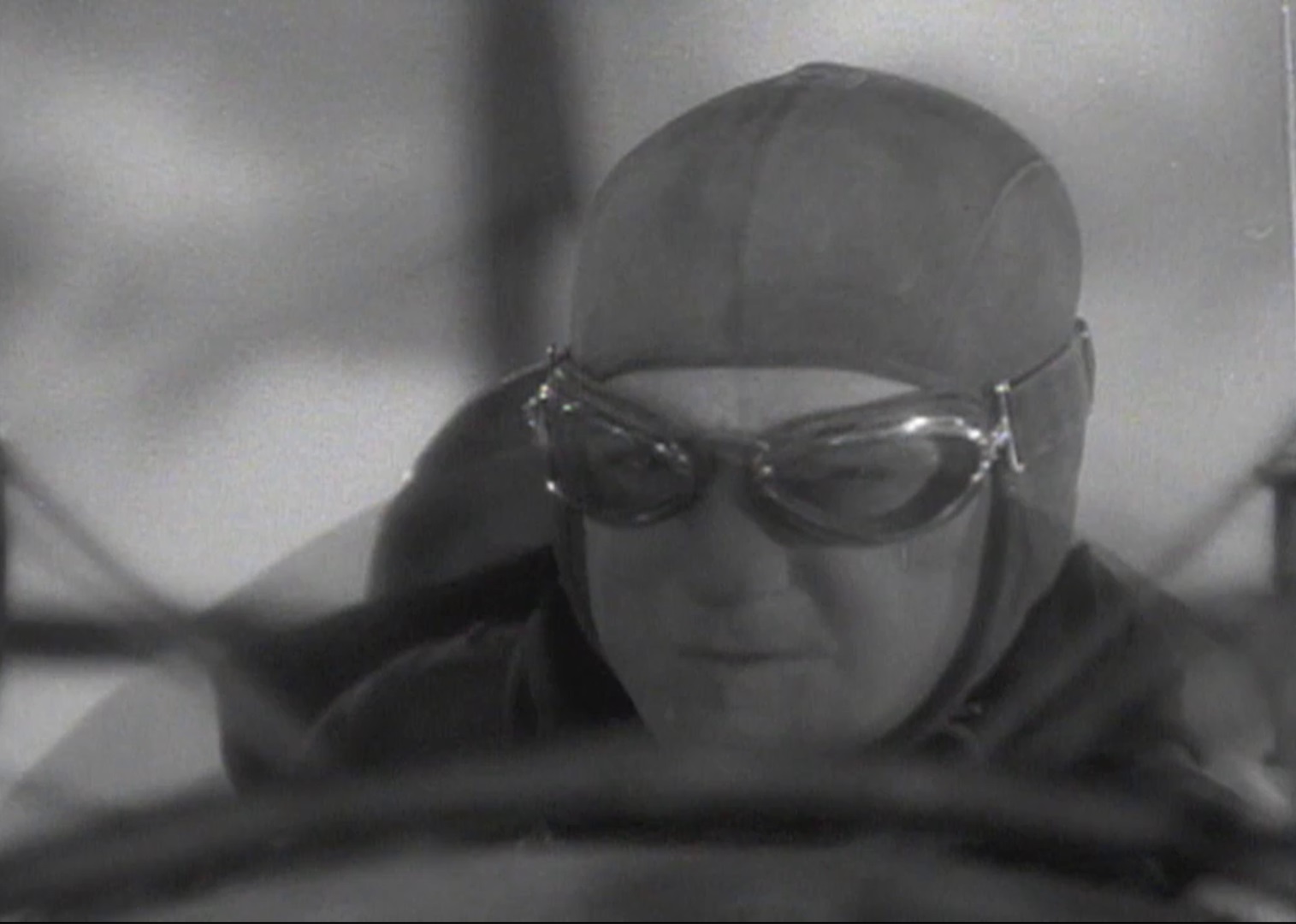 Ace of Aces: Pride and Perforation

“What can you see when you look up into the sun?”

“Sporting?! Which one of the Knights of the Round Table are you?”

Are we at war with North Korea today? Or just rattling our sabers at Iran? Maybe Eurasia is on the plate. Or is it Eastasia? It’s so hard to tell these days.

One of the things I most steadfastly admire about the films of the early 1930s is just how utterly disgusted America was with war. Then a decade after World War I– a war that began with patriotic parades and holy holies– the scars were still raw and being nursed. Today, America is still in a war, yes, right now, but there’s a new TV show on Netflix I’ve heard good things about and as long as I like my neighbor’s post about how much he hates the sand in Afghanistan, time moves on. Things change.

Ace of Aces begins on the day President Wilson finally gets us into the war to end all wars. Rocky (Dix) and Nancy (Allan) are the idle wealthy, lovers planning marriage, kids, and the world for their not-too-distant future. News of the war breaks out– stars and stripes shimmer in Nancy’s eyes, Rocky shrugs. A few days later, she appears at his loft in her clean nurse’s uniform while he works at his sculpting, carving out a beautiful woman in the style of the old masters with a smirk on his face.

“Lemmings” is what he calls the soldiers marching off to war, and Nancy shudders with revulsion. He gives her a cocky smile: “I just don’t like the idea of killing my fellow man for something I’m pretty sure he hasn’t done.” Dix’s smugness here is splendid; he knows enough to know he knows everything. The funny part is that he is right about the war, but he’s in the wrong movie for that. Movies of a different era would take the same setup and teach Rocky the true beauty of the red, white and blue. Here, he’s a jerk, who makes the mistake of listening to someone else and dully punished for it by becoming a war hero. It’s not your usual tale.

Nancy unleashes a tongue lashing, essentially rejecting and calling his manhood into question. If he’s too good for America, he’s no good for her. He tries to return to his sculpting, but that feeling that he could be wrong– that there is something more, that the woman he loves could be right, gnaws at him. He’s next seen in his brand new lieutenant’s uniform, ready for his first flight. He can’t sleep his first night, and, the next day in his first dog fight, he hesitates. This gives a German enough time to wing him. There’s a great shot of Rocky’s hand covered in his own blood as he grabs the trigger and squares his jaw. He’s left the world of higher morals and entered the realm of kill or be killed.

Dix always has a way of punching himself, a way of churning that is impossible not to watch. He’s an actor you can see thinking, turning things over, and then making the wrong choice with a glint in his eye. After his first kill, Rocky asks what the record is, and then begins to load his own gun belts. He’s seen the stakes of the game and gets invested. What’s remarkable is how the movie takes a character who could be noble, an American war ace who kills countless enemies, and perverts him into a snickering, reckless monster.

The movie carefully contrasts this to Nancy’s experiences of the war. While Rocky is given a daily adrenaline boost and hailed as a king, she’s in the receiving rooms and must triage the dead from the dying. Her journey has dovetailed from Rocky’s, which is put into stark relief when the two run into one another in the streets of Paris. He’s boasting, but his eyes have a coldness… I’d be tempted to call it disillusionment, but he never had any illusions. He’s become a machine, that amplified idea of masculinity that people expect war heroes to be. And Nancy is horrified. He pulls her close, kisses her (with little in return) and declares his intentions like a bad action movie star:

“You’ve changed so. You’re so… different. Is this what war’s done to you?”

“Wasn’t this what you wanted?’

“I didn’t know I spoke of the glory of war. I know now. The mud, the filth, the suffering, the agony… those poor helpless dying boys.”

“It isn’t muddy up where I am. When death comes, it comes swiftly and cleanly. Ah, it’s a grand war! I only hope the next one is half as good. I used to think I could take clay and mold it into semblance of a living thing. The closer it came to being alive, the greater my glory. The power of life is more than that, Nancy. Life! Life for myself as I control my plane. And then, death. Swift and final. In the squeeze of my fingers. You can’t do that with clay, Nancy.”

Crudely, Rocky then pressures her into sleeping with him. Her actions disabused him of romance and beauty, and now she fully understands her folly. She engages in sex with him as a penance.

Rocky’s punishment is soon at hand as well. He shoots down a German cadet before getting a minor wound himself. He’s in the hospital bed next to the boy, who can’t drink water because of the bullet wound to his stomach, but he screams and screams for it. Rocky eventually gives the man his bottle of water, and watches as the doctors cover him with a blanket the next day. Nancy arrives, and, with echoes of the dead man’s face in his eyes, Rocky declares himself free of his bloodlust.

If only it were so easy.

Rocky heads back to the barracks to say goodbye, but instead finds his old flying cronies slagging him off. There’s another kid approaching his kill record, so surely he can’t give up now. He pushes back, lightly at first, but the poster on the wall with each of his kills that he’s fastened up there is staring right back. Refuting orders, as he’s done many times at this point, he gets into his plane again and takes off to add another kill to his total. But when he gets behind the unsuspecting German, the young flier from the hospital flashes before his eyes. He’s shot down in spectacular fashion, barely crawling away from the wreckage.

The film tries to end on a hopeful note, even after that misguiding disaster, with Nancy and Rocky walking by the lake once more, mirroring their romantic diversion at the film’s outset. But now Rocky is limping, and Nancy’s talk of dreams and hopes have no reflections in Rocky’s eyes. You know there’s no way that man is ever getting an erection again– he’s gone, his soul as wooden as his new leg. He’s a war hero with no war, a sculptor who can’t sculpt, and a lover who’s gone cold. Maybe there’d been some hope for Rocky before he went up for that one final misguided flight… but, then again, maybe there wasn’t.

The ending of Ace of Aces may not sit well with some. It’s a quiet, unsatisfying defeat in a film whose setup seemed to promise a rousing redemption of patriotism. Gee, that sounds familiar.

It’s a quality production. Elizabeth Allan, whom I’ve never heard of, is more than a match with Dix, both actors wearing the masks of war and righteousness to the bitter ends. It’s a two person film, and, as usual for RKO at the time, the aerial footage is great. There are tons of weird details that line the edges, like the mascots each flier keeps or the way that the commander encourages Dix’s violent egomania with a big toothed grin. It’s all about the war, the way it knocks your breath out of you and changes you. Not quietly, but angrily, vividly.

It’s still happening all around us. That’s why wars are supposed to end– so  you get a minute to look at the blood on your hands and reflect. At least that’s how it used to be.

Dix himself is a bit weak at the beginning, though the more I watch the film the more I convince myself that he does good work in making his pacifist character not a coward, as I first suspected was the intention, but such an egotist that despite his aligning himself within the morality of the story from the very start—“I just don’t like the idea of killing my fellow man for something I’m quite sure he hasn’t done”—he remains unlikable. The Elizabeth Allan character, Nancy, has to goad him into war service. “You’re yellow,” she tells him. “Yellow as this piece of chalk.” Dix is miffed by this. He closes the windows of his studio on the war parade outside, planning to return to work, but distracted. I’m not sure if Rocky knows whether he’s scared or not. That’s Dix, but despite gifting Rocky this bit of humanity, intentional or not, his character is still too pompous and entitled for the viewer to really get behind.

When, upon his initial coward-branding by nurse Nancy, Rocky decries war as a chance to duck out on your wife, and work, and responsibility, you know he’s right, and he gets to say I told you so after she’s become a nurse and personally dealt with being shelled and overrun. When they meet in Paris on a furlough she says she regrets goading him into enlisting, but he’ll have none of it: “This is a great war and I’m having a grand time; every minute is grand!”  He’s high on the cleanness of the war up where he is, the feeling of life and death so close and all that separates them the movements of his plane and firing of his guns: “Yes, it’s a great war. I hope the next one is half as good!” He’s giddy with insane sardonicism but his eyes look empty, reflecting a kind of DEATH DREAM somnambulism that some critics dismiss as merely Dix’s wooden acting style. But behind that wooden mask lurks an agonized sculptor who has given up trying to hold onto his humanity, since he knows it will only get him killed. Like all sensitive artists, he starts out with far too much compassion, so he just jettisons it all. When he makes a brusque pass at her, Nancy balks. He exclaims war is is no time for scruples: “How can you refuse whatever you have to give?!” He all but twists her earlier words back into her face, and the moral hypocrisy of placing import on a woman’s virginity dissolves in WWI almost as if that was the whole point of the war in the first place.