“And as for you… Fools! Idiots! Children! Baffled by Mother Goose!”

In doing my research for The Bishop Murder Case, I’ve seen not one, but two reviews peg this as ‘slow as molasses’, which was funny since those exact words had crossed my mind.

Clocking in at a punishing 88 minutes, The Bishop Murder Case was an innovation for its time: a serial killer goes around murdering people and leaving vague clues behind to taunt the police. Now that you see this exact plot five nights a week on a dozen different television channels, much of the novelty has worn off. Worse, it makes the suspects an assortment of easy pickings, including an eccentric hunchback, an autistic chess player, and a guy who has the unfortunate nickname of ‘Cock’ Robin. Which was definitely a lot more innocent in 1930. 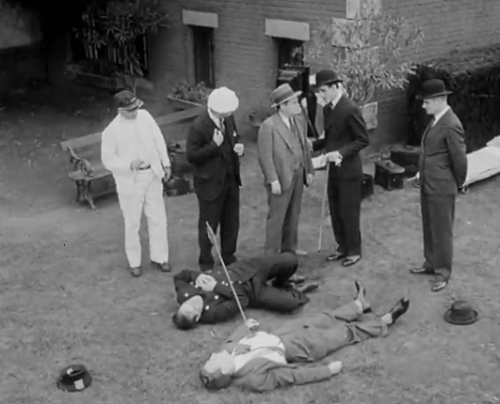 ‘Cock’ Robin has been shot with an arrow. No further caption needed.

Robin is the first to go, unfortunately, as the old nursery rhyme pattern kicks in, and soon it’s a race for ace detective Philo Vance to figure out who will be the killer’s ‘Humpty Dumpty’. Dragging down the proceedings is the fact that The Bishop Murder Case reconfigures the mystery after every murder. Every time someone dies, we get to painstakingly see every character come on, act suspicious and wander off, which kills the pacing, especially since the film is ripe with red herrings. Unhelpful as well are a number of performers who are still utilizing their silent training of excessive gesticulation and reactions, extremely noticeable compared to Rathbone, Hyams and Young’s far more natural and relaxed screen presences.

But the major issue with nearly every Philo Vance mystery is the simple fact that Vance isn’t compelling in the least. A rich bon vivant, he’s mostly notable for his deduction abilities, which would be impressive if a century of other sleuths weren’t modeled on the same skill set. Most of the Vance stories I’ve seen try to pair him up with someone, either a female suspect or a policeman foil, to keep things remotely lively. Here that’s the thoroughly uninteresting Sergeant Heath (James Donlan), whose entire function is to be buffoonish and make the exact wrong guesses so that Philo Vance can swiftly correct him. 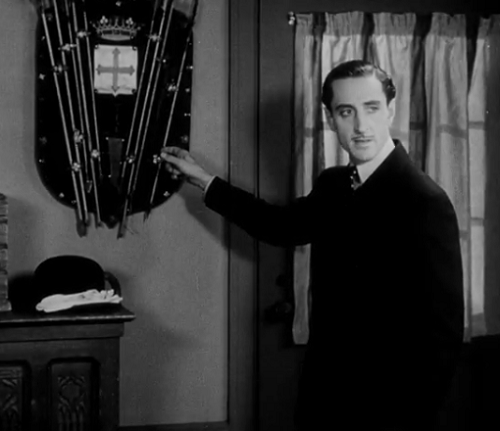 Rathbone, who would find his calling as a detective in a different murder-mystery series with a bit more personality, brings little life to Vance. The Bishop Murder Case is the third of the Philo Vance movies (more on that below), and Rathbone suffers in comparison to the other man who was at the time carrying the Vance moniker: William Powell. Rathbone is just saddled with a lifeless character and does nothing with him.

But before I razz everything about this movie, I would be loathe to forget to point out that there is some great location work and even some rare special effects used to create the home of the wealthy Dillard family who, piece by piece, meet their fate. This includes shooting outdoors (which is easy to tell from a 1930 movie since the sound is noticeably off), such as when Belle tells a story to a group of assembled children in the park or the scenery at the archery range from where Vance’s investigation launches. 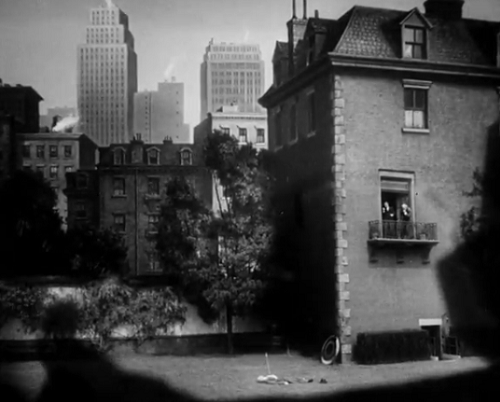 In this shot, a skyline has been inserted painstakingly while the actors on the ground and balcony are real.

The movie picks up in its final reel after Belle is kidnapped (you didn’t think she was the murderer, did you?) and some telling clues come to light. But its solution– which involves Vance letting the killer think he poisoned himself and then the killer dying from the power of that suggestion— is amusingly absurd. And I will also admit to be surprised by who the killer was, if only because the rote feeling of the plot lulled me into believing that there were simply no tricks up its sleeve.

But this just adds to further my belief that if you’re going to make a 90 minute movie with ten good minutes, it’s a lot better to put it at the beginning of the movie than at the end, when I’d already nearly nodded off. The Bishop Murder Case is based off a novel by S.S. Van Dine, and, from what I’ve read, the movie is a too-faithful adaptation of the book. There actually is probably a nice, snappy 60 minute film in here, but I’m not going to be the one who goes looking for it. 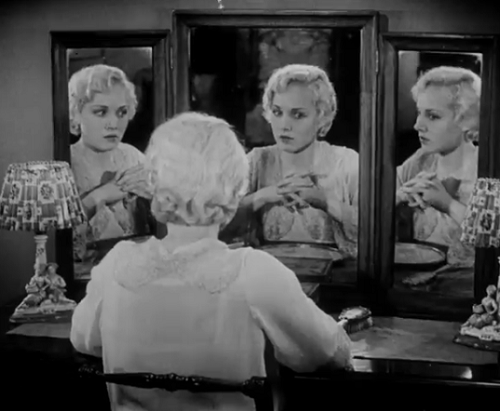 This film sometimes has good shots.

A stone-age talker where one guy handled “stage direction” and another did the rest (but what rest?), thus a shared director credit. Longish (88 minutes) as in five and ten minute naps for me throughout, but I always watch when TCM shows it — someone there must like Bishop.

Danny, I’m a big fan of the Philo Vance novels and THE BISHOP MURDER CASE is my fave (my wife and my Dad disagree–both going with THE GREENE MURDER CASE). Unfortunately, the movie version is not very good, as you noted. Basil is all wrong as Philo. Honestly, the best Philo interpretation is Warren William in THE DRAGON MURDER CASE (William Powell was too nice).

That’s interesting, Rick. Hopefully the Dragon Murder Case pops up on Warner Instant soon, because my curiosity is definitely piqued!