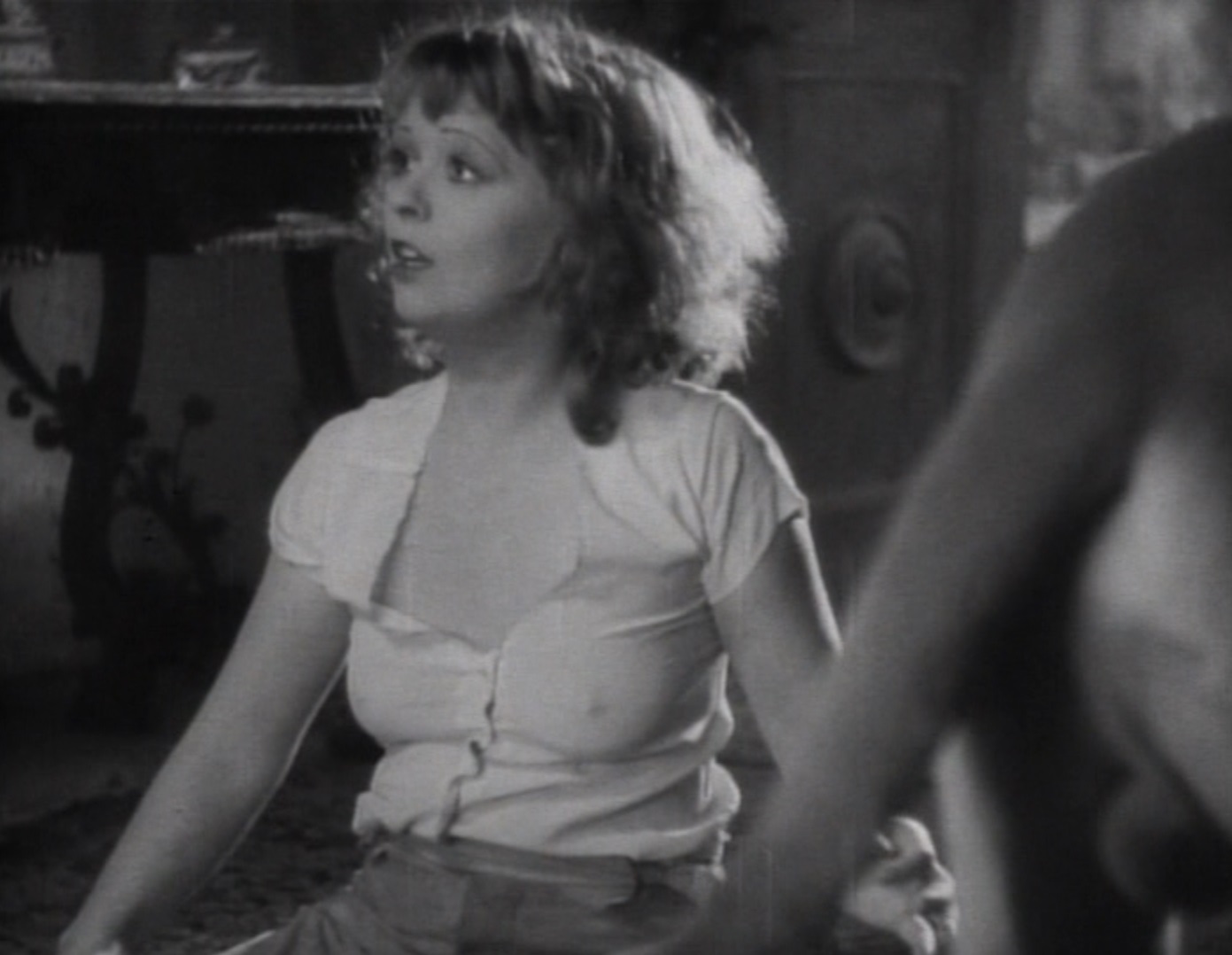 “Nobody is good or bad. People just do the things they’ve got to do, that’s all. Something inside makes them.”

Much as they are wont to say about Midwestern weather, if you don’t like the story happening in Call Her Savage, wait five minutes. It’ll be something completely different.

Call Her Savage is a wild, tempestuous film that is neither ever grounded in reality nor ever very dull. Clara Bow selected the project personally and it’s not hard to see why. As an escalation of the women’s picture of the early-1930s, this one threatens to blow the rest down by sheer force of a maddened power. From The Divorcee in 1930 to the twin ‘atrocities’ of Baby Face and Redheaded Women earlier in 1932, Call Her Savage ups every ante to put its protagonist through the emotional ringer, all while wailing helplessly against the united forces of the patriarchy that keeps her down. 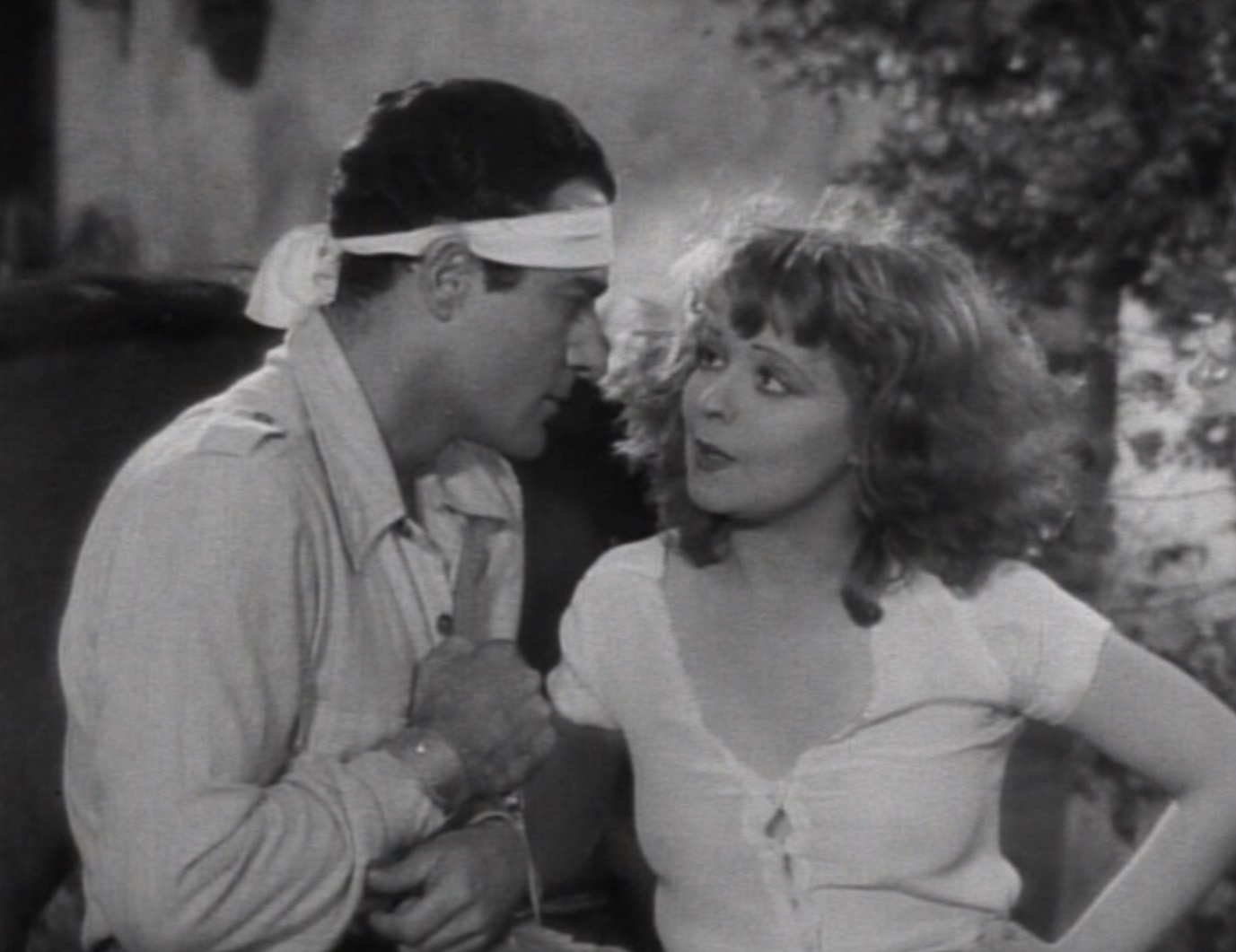 The film begins with some preponderant multi-generational rattles, starting with a wagon train that is attacked by Native Americans due to the leader’s extramarital affairs. He’s warned that the sins of the father spread, and so his daughter, Ruth, grows old and has an extramarital affair of her own with a Native man named Ronasa (Weldon Heyburn). The result of this union is Nasa (Clara Bow), though her freewheeling and downright violent nature are abhorred by her wealthy but strict father (Willard Robertson).

We’re introduced to Nasa as she wildly rides a horse; she’s thrown off and confronted with a rattlesnake, which she merrily whips to death. Her friend “the half-breed” Moonglow arrives and laughs at the sight, so she whips him frenetically too. She relents and apologizes, “I hate to get angry, but I can’t help it! I wish I was like other girls!” 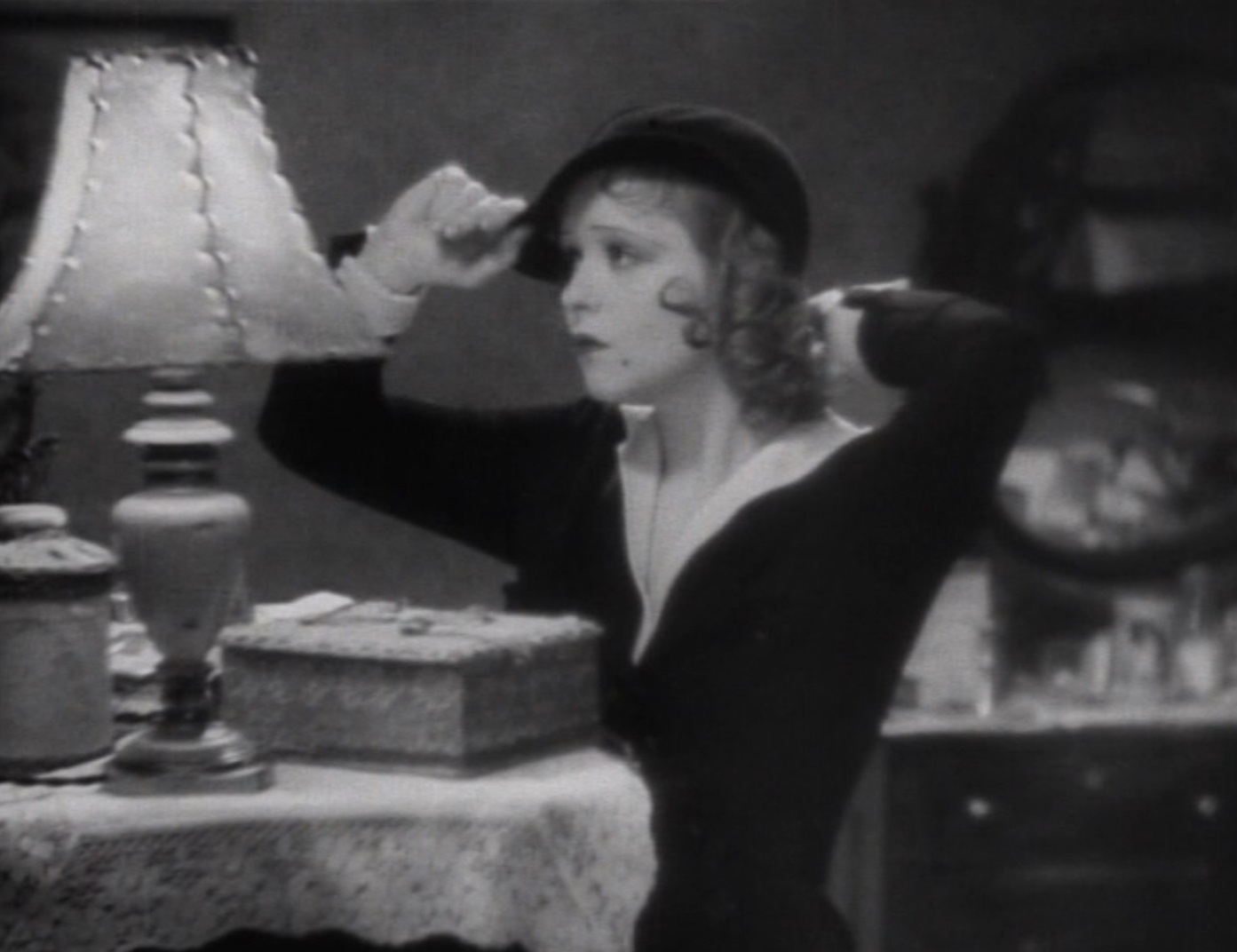 Nasa spends much of the movie decrying her temperamental nature, which is readily expressed through punching taxi drivers or jumping into catfights with romantic rivals. I’ve covered a lot of what happens to her up in the ‘Proof That It’s Pre-Code’ section because the film is a roller coaster ride of controversial riffs that never dwells very long. The movie takes us from Texas to Chicago to New Orleans to New York, going from a Western epic to a drama of a bad marriage to a woman forced onto the streets to a light romantic comedy and back to the Western to wrap things up.

Unfortunately, for as much as Fox crams into the picture, it’s not a very rewarding endeavor to watch, other than standing in awe at the gall of it all. 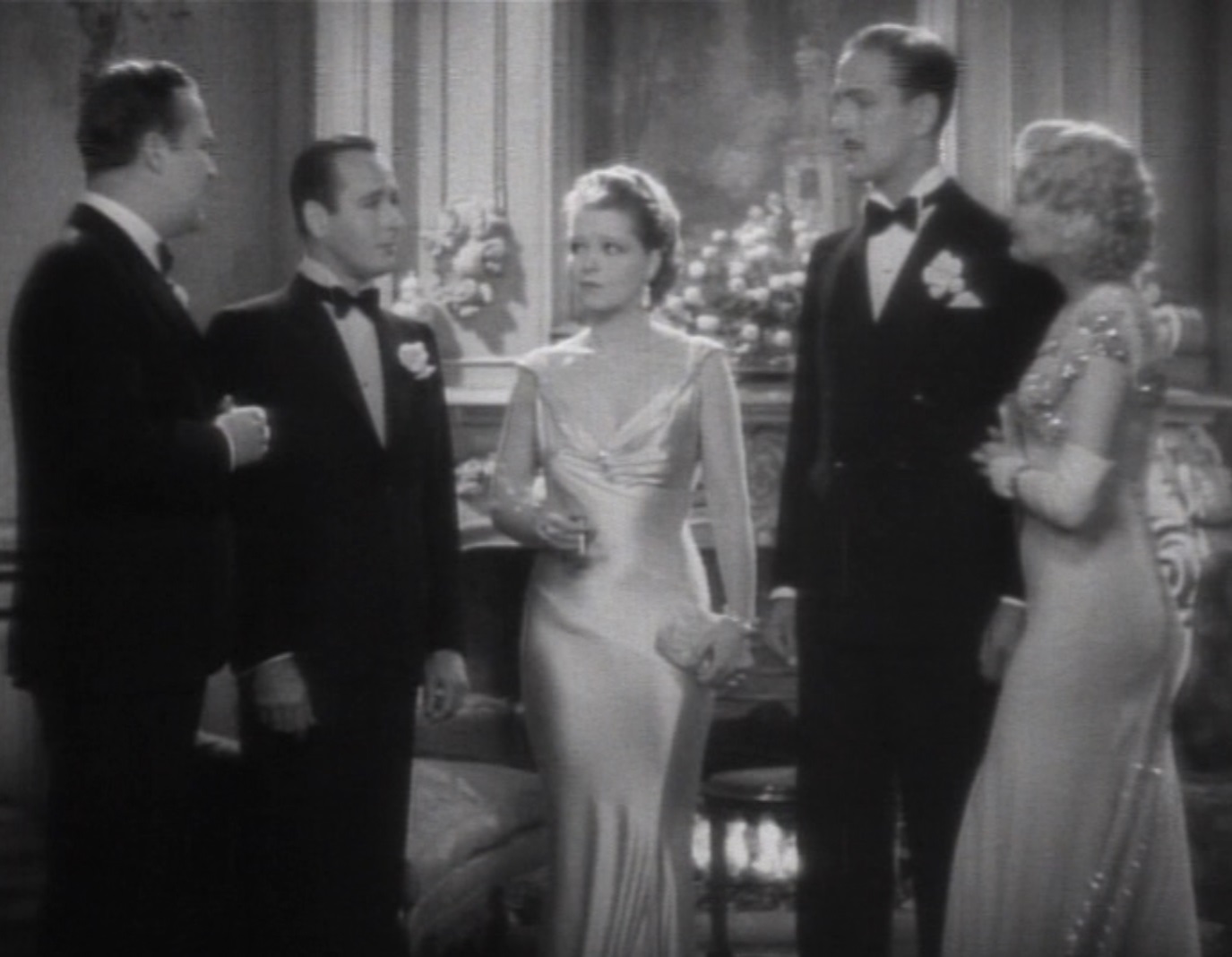 There are some touches of art in the movie, but almost too few. One montage of Nasa’s declining fortunes as she’s forced to live the tenement life that shows her going from taxis to streetcars and hotels to a walk-up is effective. However, the many scenes of Bow in various states of undress clearly occupied much more of the film’s consideration than much else.

The message of Call Her Savage, as Nasa so surmises in a drunken, frustrated haze at the film’s climax as she heaves a bottle through a mirror, is that men are pretty rotten. This is a common and completely understandable refrain, especially as Nasa has been beaten, cheated, and defeated by a cruel number of them.

Her most important relationship with a man is that of her father (the one who raised her, not the one from whose loins she has thus descended). She craves his approval and understanding, and this drama is felt more strongly than any of her romance with the male costars. This feeling could almost be called incestuous for all the ways she spurns him in the simple of hope of gaining his affection, though she could never say it aloud. (And they aren’t really related since he’s not her real father, so, uh, good?) 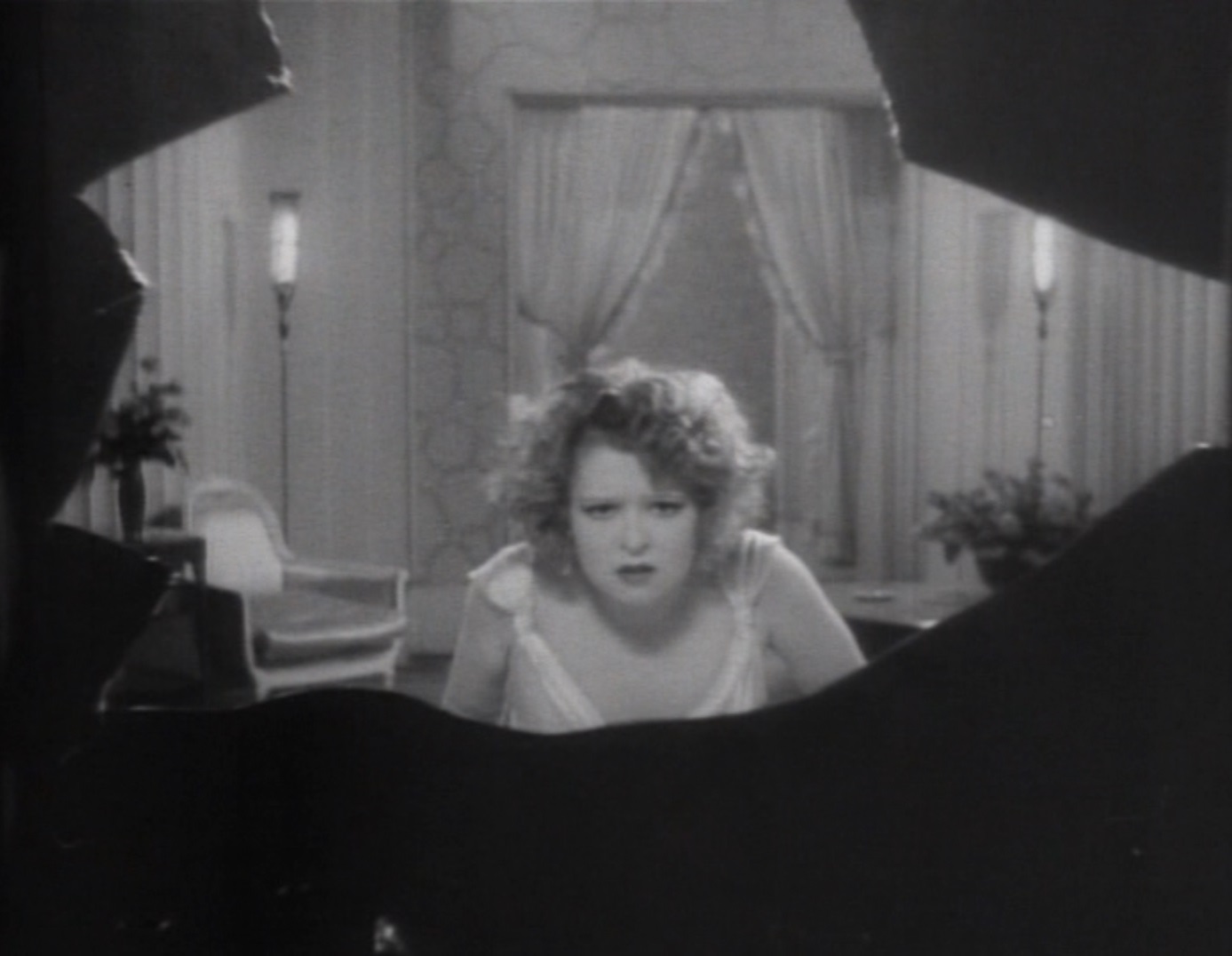 While it is true that Nasa is hot tempered and, especially in the early parts of the picture, she acts like an overgrown baby, she is also never given the benefit of the doubt by anyone. For a woman in this time, it didn’t matter how much money you had, if you didn’t fit in with conventions, you were derided and demeaned by men to make you as powerless as they wanted you to be.

This film’s view on Native Americans could be considered regressive at best. Besides the opening attack, which is relegated to almost being an act of God, the Native portrayals (all by non-Natives) are ludicrous. Ronasa is dreamy but completely dead outside. Gilbert Roland plays Moonglow with a stoicism bordering on non-existence. He is present at the beginning of Nasa’s story, appears for a few moments in the middle, and then appears only again at the end; the fact that he’s only a credible match for Nasa after she discovers she, too, is racially mixed, is an appalling reminder at how much has changed in less than a century.

(Important side note I don’t want to leave out: I do not understand how Nasa’s father never connected the dots that his daughter is the product of an affair with a man named RoNASA. Bizarre.) 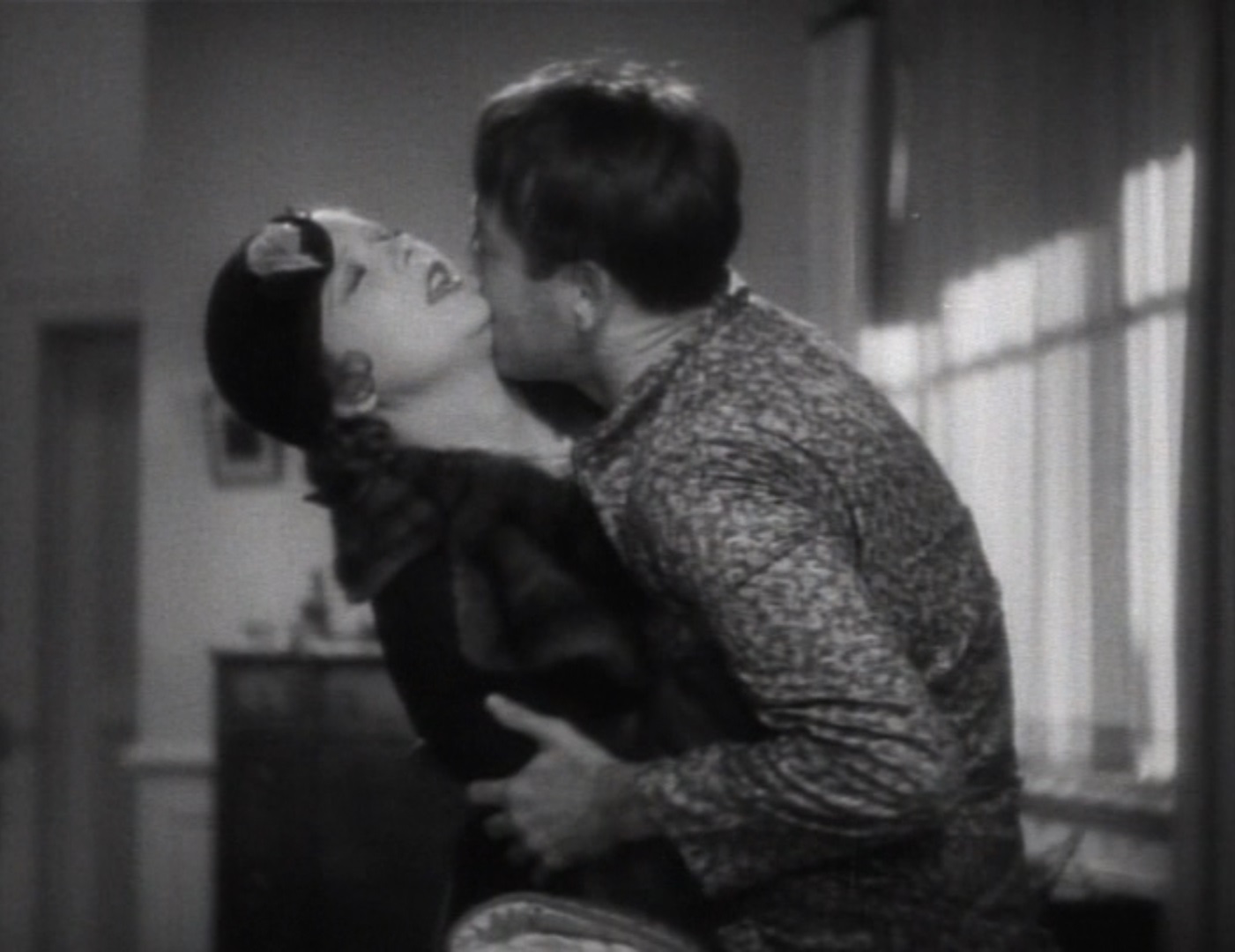 Call Her Savage (and, oh boy, that title) also presupposes that much of Nasa’s wild behavior comes from her Native American lineage, which is also undeniably racist thinking. Worse, this dramatic twist hinders the character, implying that we’re watching the life of a woman whose mind is not her own, but that all the drama she goes through is actually simply us getting the payoff for her relative’s transgressions, which is not very dramatically compelling in the slightest.

One of the major problems with the film is that Clara Bow starts the thing at ’11’ and never backs down the dial. The script does her few favors, often have her only reiterating that she has no idea why she’s so hot tempered before she wanders into another physical altercation, whether that is kicking Thelma Todd in stomach or smashing a guitar over the head of some dreamy singer. Say what you will about Call Her Savage — and there is a lot you can say– but Clara Bow throws enough punches that this film cold almost be classified as an action movie. 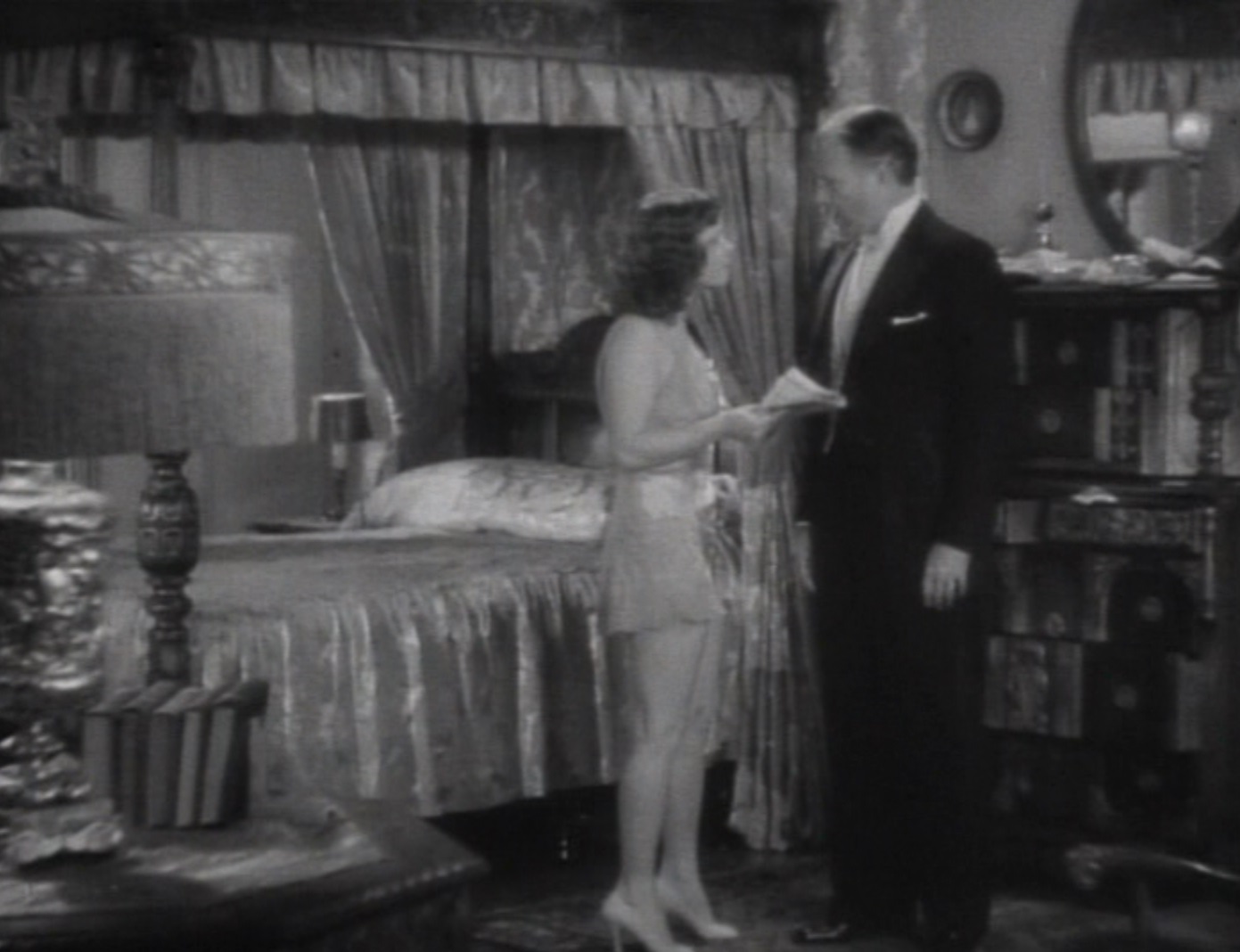 Everything in the film is pitched at this height of melodramatic excess, from the battle, early in the film to Nasa’s spiraling descent and wild return to grace. The only time the film ever sees fit to dial it back come in the last ten minutes, is the quiet, passive final ten minutes that offers no real catharsis between daughter and father, only an (extremely racist) explanation and a fadeout. She can blame men all she wants for her troubles, but the film accuses the grandfather she never met for all of it– what’s satisfying in that?

Call Her Savage is a wild film, operatic and unhinged. It’s hard not to be underwhelmed by the drama, but also be impressed by its unbridled zaniness. It’s one of those movies that defies categorization, really, and simply must be seen to be believed.

By 1932, when Call Her Savage was released, Clara Bow had climbed her way to stardom, become an icon of the Roaring ’20s, and survived the coming of sound. She had also been vilified in the press for her personal life, victimized by her secretary who aired her dirty laundry in public, and scandalized by a nervous breakdown. She was 27 years old.

Bow would make only one more film after Call Her Savage before retiring to her marriage with cowboy actor Rex Bell. Throughout the rest of her life, she suffered with mental illness, at times checking herself into various facilities. She attempted suicide in 1944 when Bell decided to run for the Senate in Nevada. Five years later, she entered yet another institution where she endured electric shock treatment. While her experiences in Hollywood likely did not cause her mental health issues, the exploitative nature of publicity and promotion undoubtedly exacerbated it. Call Her Savage was released at a key juncture in her life and career, and it is important to understand the film in that context.

Call Her Savage was developed especially for Bow by her friend, producer Sam Rork. Both Rork and Bow needed a successful film to overcome recent difficulties. The producer was experiencing a slump, while the star was recuperating from a nervous breakdown. In 1931, Bow’s secretary and close friend, Daisy De Voe, revealed her employer’s sexual exploits during a court case brought against De Voe by Bow and Bell. The press, who had begun to depict the poorly educated Bow as an inarticulate low-life, sensationalized De Voe’s claims and half-truths, which affected the star’s mental health as well as her standing in the Hollywood community. After she was able to return to work, Bow signed a two-film deal with Fox Film, and Rork persuaded Fox executive Sidney Kent to produce Call Her Savage. Bow had story approval and signed off on the first draft of the screenplay in September 1932.

Lamentable though it was, the plot gave Bow what most actors crave, a role with multiple identities. In one fast-paced film, bow plays a wild teenager, an impulsive debutante, a jilted newlywed, a thrill-seeking party girl, a young mother, a prostitute, an aloof society gal, a slumming brawler, a sexy drunk, and a repentant daughter.

Jason Joy sent a letter to each state board: “Because it is a new Clara Bow that the screen is presenting… we are all very hopeful that the picture will be judged as a whole for the character study that it is, all parts of which inter-link importantly.” In Call Her Savage, Fox mounted more titillating scenes than Paramount, more production value than M-G-M, and more topicality than Warner Bros. What it forgot was taste. 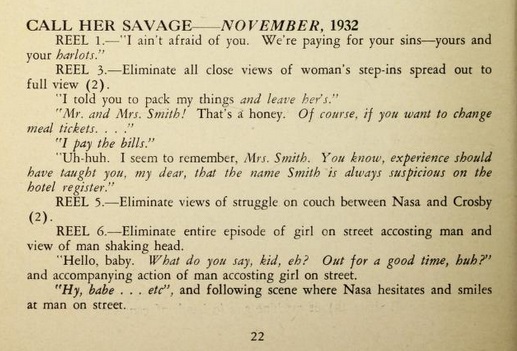 This pictorial tale hails from a novel by Tiffany Thayer and it was directed by John Francis Dillon, who is evidently no great believer in subtlety. It is scarcely an offering that can be recommended for its plausibility, but who knows but that there may be a girl somewhere like Nasa Springer. Miss Bow does quite well by the rôle of this fiery-tempered impulsive Nasa, but whether the flow of incidents makes for satisfactory entertainment is a matter of opinion.

While Call Her Savage is great fun mostly because it’s all sin and exploitation there is a performance in there as well. Nasa has her share of hard times to overcome culminating in a drunken stupor where she revisits all of the terrible things men have done to her before breaking a mirror. She stands framed by the broken glass, broken herself.

I get the feeling that if Barbara Stanwyck had done this it’d be considered a can’t miss classic. If Jean Harlow had done it it’d have more general notoriety than Red-Headed Woman (1932). But Clara Bow starred in Call Her Savage and I don’t think any actress could have done this one any better. A perfect fit. 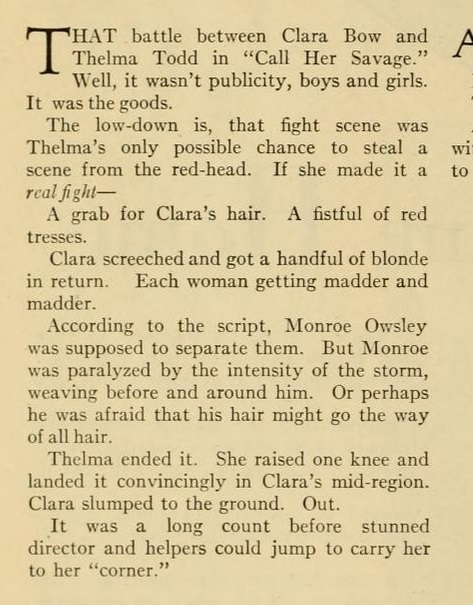