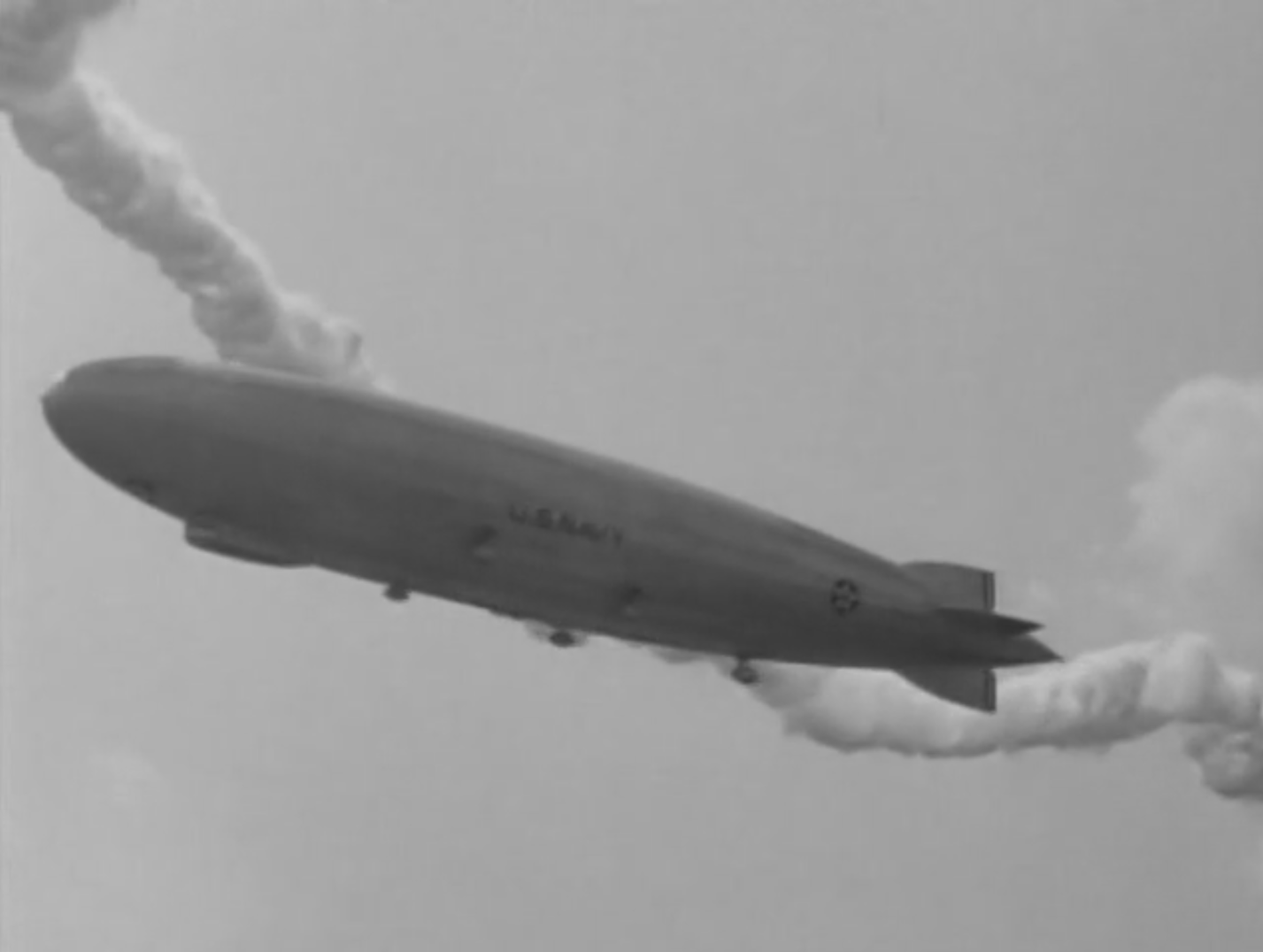 “Well… you can only die once.”

The success of William Wellman’s Wings in 1927 and the subsequent box office phenomenon of Howard Hughes’ Hell’s Angels showed one thing: the public loved a good aviation picture. And it’s no wonder– sound technology gave the hums and whirs of the airplanes up close and personal like never before. Daredevils of the First World War migrated to Hollywood and cooperation with the military gave the studios plenty of feats of daring to put on film.

Compounding that nowadays, especially in Dirigible, is the presence of, well, dirigibles. The giant balloons that one looked like battleships of the air are now consigned to the dustbin of history. Since this film was produced in conjunction with the Navy, there’s plenty of footage of them gliding through the air, including past the Statue of Liberty. We’re treated to some adventure including one spectacular breakup during a torrential storm.

If it sounds like I’m harping on the special effects, that may be because the plot itself contains a multitude of echoes from previous aviation films, often shallow. Fay Wray has that eternally unwelcome role as the fulcrum between two buckets of testosterone who, this time, are competing to see who can reach the South Pole first. One is Jack, an advocate for dirigibles, and the other is Frisky, a big airplane pilot with a reckless streak. Wray’s Helen is married to Frisky, though that may change depending on the amount of ego-serving bravado one may exert.

The film’s climax involves a plane crash in the remote Antarctic snow and a daring rescue. This is where the film picks up as it becomes a survival tale, four men against the worst elements with nearly no hope of rescue. It’s pretty harrowing stuff, and the only stuff in the film that really clicks.

Dirigible was made in a time where world records were falling like dominoes and men of great skill and desire– and stupidity– battled one another to put their names in the record books. The movie does a good job capturing that nationalistic fervor, as well as magnifying the consequences of Icarus straying too close to the sun.

Clarence Muse appears for a few minutes to joke about ‘climbing that pole’ and how he knows better than the pilots about the South Pole– after all, he’s from Birmingham! He later shows up at the Antarctic camp to sing “Swing Low, Sweet Chariot.” I’m sorry, Clarence. You deserved better. Roscoe Karns, still in the early stages of being a comedic sidekick, gets some fun here. He also gets one of the most brutal sequences in the film’s latter half, giving him the most dramatic part in the entire enterprise.

It’s all very big, abstract stuff, and director Frank Capra certainly knows how to juggle the up and downsides of nationalism. The film is effective, I just couldn’t find myself involved in the main arc– it’s too convenient, and the characters all too defined by their goals rather than any personality. Wray’s character is especially frustrating, as she seems to no other hobby than to fret constantly.

That being said, if the opportunity to see this on the big screen ever came up, I would jump on it. While much of the love triangle is safe ‘bathroom break’ territory, there’s a terrific sense of scale and action here rarely met at the time, and there’s a hell of a gut punching ending to boot. It just takes a long time getting there.

The story for Dirigible was penned by the famed Naval Academy graduate and aviator-turned-screenwriter Frank “Spig” Wead. John Ford, a friend of Spig’s, based his film The Wings of Eagles (1957) on Wead’s life story with John Wayne in the lead. Wead was a big proponent of speed competitions and air racing. And it was just those demonstrations of the Navy’s might which pushed that service branch into the public consciousness. Public pressure then turned on Congress to fund the advancement of aviation technology. Wead transitioned into writing when he broke his neck in a fall in 1926 and became paralyzed (though he later regained the use of his forearms and legs). He would go on to receive two Academy Award nominations, for Test Pilot (1938) and The Citadel (1938).

One Reply to “Dirigible (1931) Review, with Jack Holt, Ralph Graves and Fay Wray”