A Holy Terror: An Unholy Bore

Let me be completely upfront about A Holy Terror: your interest in this film will be directly proportional with just how much you have ever wanted to see Humphrey Bogart in a cowboy hat.

Mind you, you’ll get a few glimpses here on the site of him donning just such attire, but to get the full experience, the Bogey drawl and gravelly threats, you pretty much are stuck with watching A Holy Terror. Or possibly some other movie where Bogart plays a ranch hand. I’m sure it’s out there.

But back to today’s picture, a fairly uninteresting little action-adventure film that suffers from good actors and not enough plot to go around. Pretty boy George O’Brien (and just look at how many times a picture of him in a tight t-shirt accenting his perfectly crafted pecs are displayed within in the film!) comes home one day from a polo match to discover that his father has died from a shot to the chest. There are only a few clues to who the mysterious man lurking around the mansion was earlier that day, so George follows a hunch and heads to Wyoming to confront the rancher who may be at the heart of things. 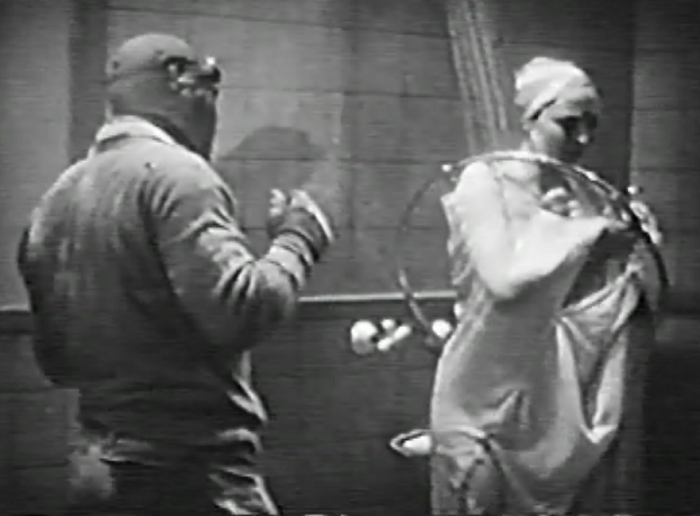 A little embarrassing for all involved, yes.

Being a playboy bon vivant, O’Brien’s character takes his own plane to Wyoming. But being a playboy bon vivant, that doesn’t make him the best airplane pilot in the world. His plane flames out upon attempted landing, so he instead manages to plow it into the side of the boarding house. He’s a bit dazed, but still pretty appreciative when he discovers he broadsided the bathroom and Sally Eilers was in there taking a shower.

It’s a cute– and hilariously contrived– way for the boy to meet the girl, but the movie plays it for laughs early and often. A Holy Terror knows that that moment is the best thing it’s got going for it.

That’s probably because the rest of the movie is much more contrived and much less cute. Upon emerging from the bathroom, George is introduced to the villains in short order, including Bogart, the ranch hand for the man O’Brien is seeking out. He’s also got a thing for Eilers, too, and most of the rest of the plot involves George foolishly trusting him and Bogart glowering. 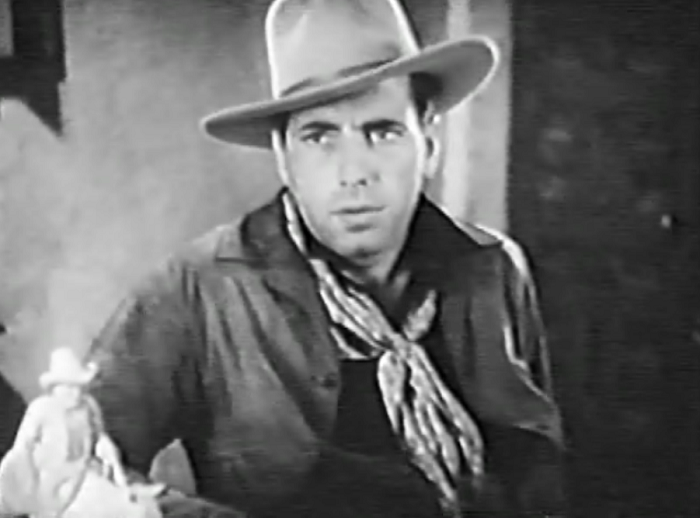 Planning on tricking our hero, one obvious ruse at a time.

There are some nice moments in A Holy Terror. Sidney Fields, playing Nash’s lead thug, has a cute scene where he begs the barber to make him look good– but there’s nothing the barber can do about it. That’s also during a weird moment where O’Brien and Eilers are out on a date on a local bar / dance hall / bowling alley. You got me on that combo.

George O’Brien was a Navy boxing champ who became a minor star in Westerns starting with John Ford’s The Iron Horse in 1924. He worked steadily through the 30s, reenlisted in the Navy for the second World War, and finished his career in Ford’s Cavalry Trilogy. He’s got a good smile and an easy charisma. Eilers is excellent, too, and Bogart is in full on scenery chewing mode.

But A Holy Terror suffers from a complete lack of forward momentum. The setup takes up a fifth of the movie, O’Brien wanders around the Wyoming town just goofing around for a while, and the film’s villain has to keep acting obtuse to maintain the complete lack of suspense. The action is passable, but the only reason to seek this movie out, save for Eilers’s smile and O’Brien’s good looks, is Bogie in a cowboy hat. Look at that! Should have held onto that thing for Casablanca.

But no melancholy light should glow on Monday morning, regardless of the state of melodrama, wherein all seems to be vanity. “A Holy Terror” is here to take its meager bow, and with George O’Brien to solve its twin mysteries of murder and love. On the framework that was once the endless flickering serial he and his associates have added the Gothic structure that is 1931—in sound. And so, while death still rides the Western plains on horse, youth plays polo in the East and then leaves for Wyoming in an airship.

I am surprised this film even existed! As a Big Bogart fan, I’ll want to see it, even if he’s underused. Kudos to you for finding this movie.

Glad I piqued your curiosity, even if the film is flimsy. Good luck in getting it yourself!