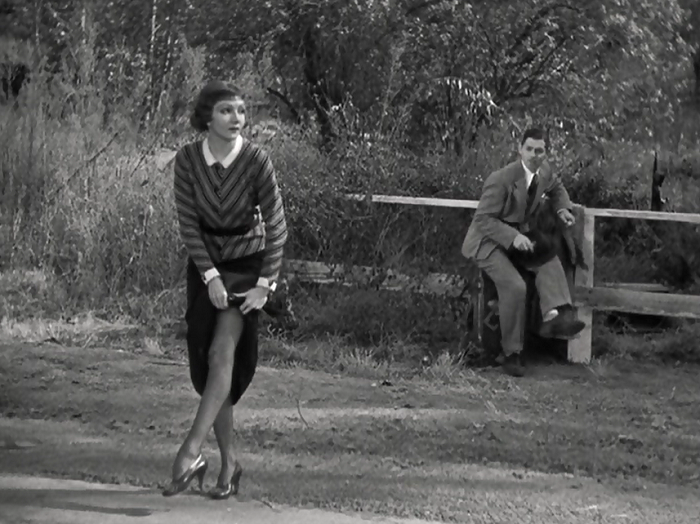 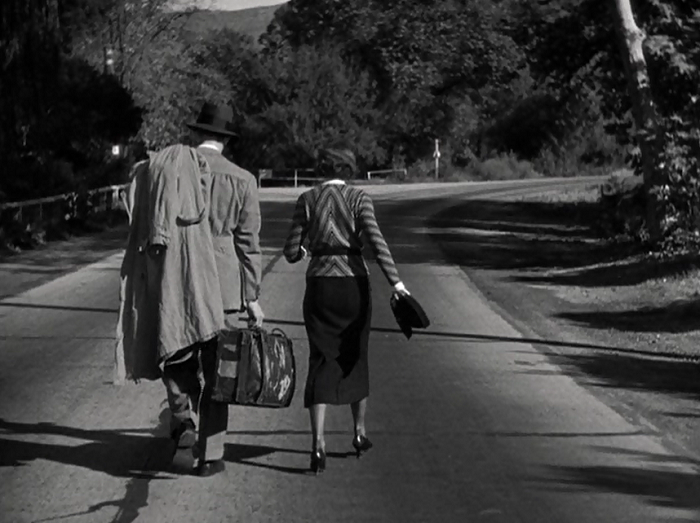 It Happened One Night: Bringing Down the Walls and Everything Else In Between

“I want to see what love looks like when it’s triumphant. I haven’t had a good laugh in a week.”

There few films as uniquely influential, or as uniquely wonderful, as Frank Capra’s It Happened One Night. It’s the roadtrip romantic comedy to end all,  with two central performances that are iconic and a legacy that has reverberated though almost a century.

It begins when heiress Ellie Andrews (Colbert) decides to ditch her father’s imprisonment aboard a yacht after he’s forbidden her from returning to her husband King Westley (the ‘King’ is his first name, but also cagily suggests how out of touch the man is). Westley is in New York, so Ellie must make her way there from Florida discreetly, lest she be found by the army of detectives her father has sent out after her.

She decides that taking a bus will be below their radar, and has the misfortune of sitting next to Peter Warne (Gable), a liquored up newspaperman who just got fired. The two take an instant dislike to each other, though Peter becomes concerned when he realizes how bad Ellie is at bus travel; she quickly has her her bag stolen and not soon after misses the bus because the driver didn’t wait for her as asked.

Peter figures out her secret, and agrees to travel with her and keep her safe just so long as she let’s him write an exclusive story about the adventure. He’ll sell it back to his former editor and make him eat crow.

Unfortunately (and if you’ve ever seen a romantic comedy, you’ll know this next part), neither expect to fall in love with one another. They bicker and banter, and even have moments where they let themselves drop their guards.

The two are separated by a sense of pride as well as their class and experiences, which are all encapsulated by the blanket that Peter uses to separate the sides of the motels they stay in. The Walls of Jericho, as he nicknames his construct, will keep them chaste and pure. It’s what happens when the walls aren’t around that sets off the sparks.

A lot of the cleverness in the personality clash between the characters of Peter and Ellie comes from the fact that they’re both essentially children. Their petty squabbling comes less from a background of class divide but from an urge to always be right. Gable and Colbert have no qualms in going as silly as they can, and the movie rewards them for it.

Gable huffs and puffs as Peter, filled with gusto and bravado he hasn’t obviously earned. His drinking problem seems to come from more of a childish impetus to show off and be popular than any sort of addiction.

Ellie, who was stuck in a state of arrested development because of her father’s nannying, can’t help but maintain a reserve of sass. She also loves a good putdown, and quickly pegs a good nickname for Peter– “young man”– that shows both disdain and her own superiority.

Both traffic in rude gestures and childish debating in a desperate jockeying to prove that they’re right simply because they both believe that they already know everything. The love they find within one another is what finally matures them into adulthood.

There are a couple of great moments I wanted to go over and touch on, since Capra imbues the movie with so many humanizing touches. The first is the scene where hitchhiking Peter and Ellie are picked up by a singing driver played by Alan Hale. Though we in the audience listen to Hale’s weak wobblings, the two in the back seat make private jokes to each other. Not getting to hear their whisperings is a wonderful touch; it makes them the background characters momentarily (which foreshadows a bit of the end), and gives us the opportunity to see just how obvious on the outside it is that the two are falling deeply in love.

Another of my favorite scenes is the last between the newspaper publisher, Gordon, and Peter. Peter again attempts to deflect anything painful or embarrassing to him by saying that the story t about Peter and Ellie falling in love was hooey, but the publisher, who has spent the entire movie being antagonistic, intuitively understands what actually happened. It’s a great reversal of expectations for the character, and nails how Capra and writer Robert Riskin saw humanity: a lot of bluster, but sympathy and humane underneath.

My favorite scene of the movie, though, isn’t the iconic manner in which Ellie manages to hitchhike, nor even the scene of Peter slyly explaining how a man undresses. No, mine is one that’s rarely talked about; after Peter and Ellie have to make a run for it off the confines of a bus, the two find themselves at a stream. Peter hikes up his pants (with Gable looking appropriately silly in the process) and carries Ellie across while the two argue over what, exactly, piggybacking is. It highlights their differences perfectly, and points to why the chemistry is so powerful; even when the point is as meaningless as this, the two go at it with jokes and jabs without holding back. It also results in this wonderful line of pure hooey from Peter:

“You show me a good piggy-backer and I’ll show you a real human. Now you take Abraham Lincoln for instance. A natural born piggy-backer.”

Now that’s a mental image worth watching for.

Few directors are as well known for their social commentary as Frank Capra, and It Happened One Night is replete with moments that comment on the times the characters live in. It’s a deeply patriotic film without a single instance of the stars and stripes coming out, which speaks a lot to Capra’s credit.

The scenic trip from Florida to New York gives us a vivid glimpse of the world as it was in 1934, from the crooks at the bus station to the poor woman on the bus who doesn’t have enough for money. That’s not to say it still isn’t romanticized in places, but, as Capra often did, he mixes in the bad side of the country with the good, giving the audience an undeniable feeling of the unvarnished reality.

Capra makes great use of the improved mobility of the camera, and the wealth of outdoor scenes present in the final cut feel alive and vital for a studio film from this era. One impressive pan follows Colbert as she makes her way from her room to the outdoor woman’s showers. During these moments we see kids at play, families trying to get their cars to work, conversation abounding… it gives the film vitality, as well as reinforce Capra’s idea of community.

We get this again when a jamboree breaks out on the bus the pair are traveling on. Even Claudette Colbert was skeptical that a whole busload of people would know “The Man on the Flying Trapeze”, but its a solidifying moment that fulfills Capra’s belief that all people, once they can get past money, age or class, were silly underneath. The song itself is such a breezy bundle of nonsense that the whole sequence takes on a warm tone of shared humanity and goodness.

One might hardly notice that the film’s closing minutes don’t contain either sight nor sound of Gable and Colbert. In fact, the last scene of the two actors together actually is a scene of discomfort as they’re still angry at how things turned out, both believing that the other had betrayed their trust. This works much better than so many other variations of the romantic comedy formula since neither acts out of a sense of selfishness, but rather a sense of panic that’s been forming about their encroaching arrival at the gates of something resembling maturity.

Again, this is resolved off screen with the simple blow of a trumpet. Capra, who has carefully built up the metaphor for the Walls of Jericho and with a couple of winks at the audience, gives the ending the movie both a satisfying and deeply suggestive moment to fade out upon. Like they say about kissing, it’s more interesting watch an hour of build-up than five minutes of the act; I think It Happened One Night knows exactly when to cut away.

There are damn few things you can say in disrespect to It Happened One Night. Even its 105 minute run time, which would be bloated compared to many flicks of the era, zips by effortlessly. The more movies you’ve seen, the more you’ll appreciate how much charm and energy Capra packs in, and just how naughty and silly Gable and Colbert can get while making it look so effortless. It Happened One Night remains one of the eternal gems in Hollywood’s crown. 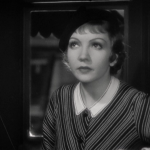 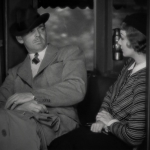 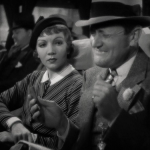 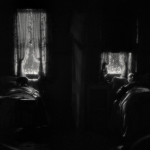 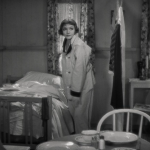 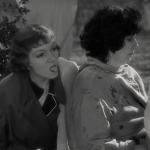 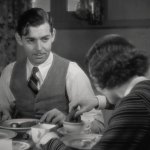 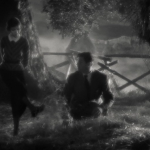 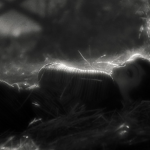 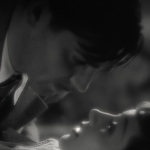 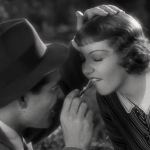 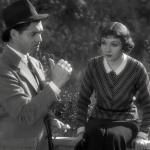 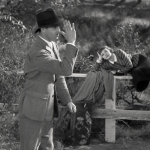 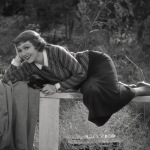 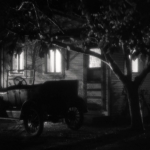 And, since my wife promised to one day read this site, I figured it wouldn’t hurt to have a sexy gallery of sexy Clark Gable. Sexy. 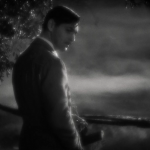 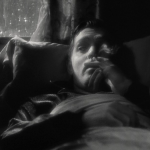 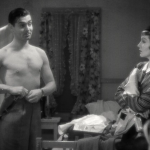 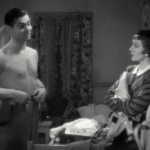 Richard Maltby quotes Rene Jordan’s musings that Gable “had a power to give orgasms, even to a generation of women who weren’t too sure whether they were supposed to have them.”