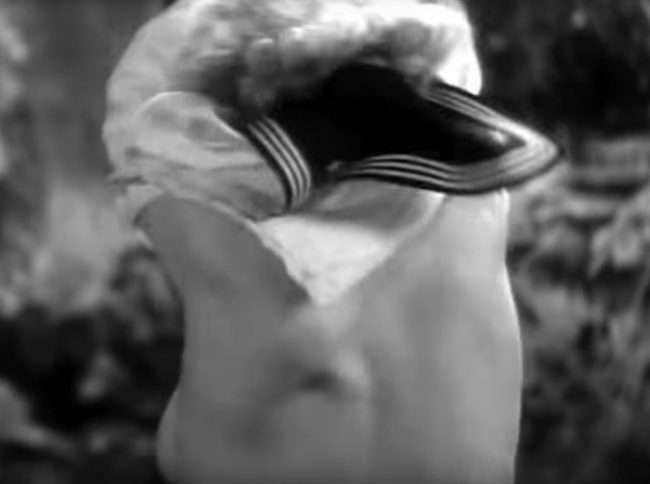 “I’d rather pal around with the murderer!”

Sometimes you’re just stuck feeling bad. Here is Anita Page, who was Metro’s golden girl less than five years earlier, stuck in one of those pictures where a monkey steals her underwear. I don’t know why that’s such a common trope for movies of the era, but I’m sure no actress has ever gotten to that page in the script and subsequently thought that their career was on an upswing.

Page shows a surprising amount of skin in a film that has nothing else going on. In a movie where you can count the sound stages used on one hand and, I assure you, is at least 25% stock footage, they’ll do anything they can to hit that 60 minute mark.

The excuse to get Page alone and vulnerable on that island: her character, Doris, has seen her brother arrested for murdering a police officer. She’s tracked the man her brother claims really did it down with the help of journalist John Franklin (Thompson).

The real murderer appears to be tipsy socialite Gordon Wayne (Starrett), who dresses nicer than Franklin and always worries about breaking Doris’ heart by telling her ‘the truth’. Wayne is accompanied by wacky sidekick Eddie (Eddie Borden; you’d recognize his voice if you heard it), who is cracking wise and trying to do card tricks.

The cruise ship they’re on crashes off the African coast and soon it is only the four of them fighting for survival in the jungle. There’s footage of lions and hyenas everywhere. Gordon Wayne almost instantly loses his shirt and builds an island home that would leave the Professor envious. He even wrestles a lion to save Doris, leaving her eyes a-dancin’. John, meanwhile, looks like Herbert Marshall with a constipation problem and has devolved into being petty, jealous, and waving around his pistol indiscriminately. It’s not hard to see where this is going.

One moment of interest is when a chunk of their ship floats back to the island they’re on and they discover the ship’s captain still aboard, barely grasping onto the last few moments of his life. A different movie, the one where a ship’s captain is trapped on the broken vessel he failed for a month alone and at the end reunites with some of his ill-fated passengers, where he then demands– I am not making this up– a viking funeral… that is the movie I’d rather have seen.

Doris demands the captain marry her and Glenn, which leaves John none too pleased. Some stunt doubles have a fistfight, and things resolve improbably ever after.

I picked Jungle Bride out because it’s public domain, and the second result in YouTube for a full-length pre-Code film after Night World. This is a low budget film that exists because MGM was willing to loan Anita Page to anyone willing to help sabotage her career, and Monogram stepped up with flying colors. Skip it.