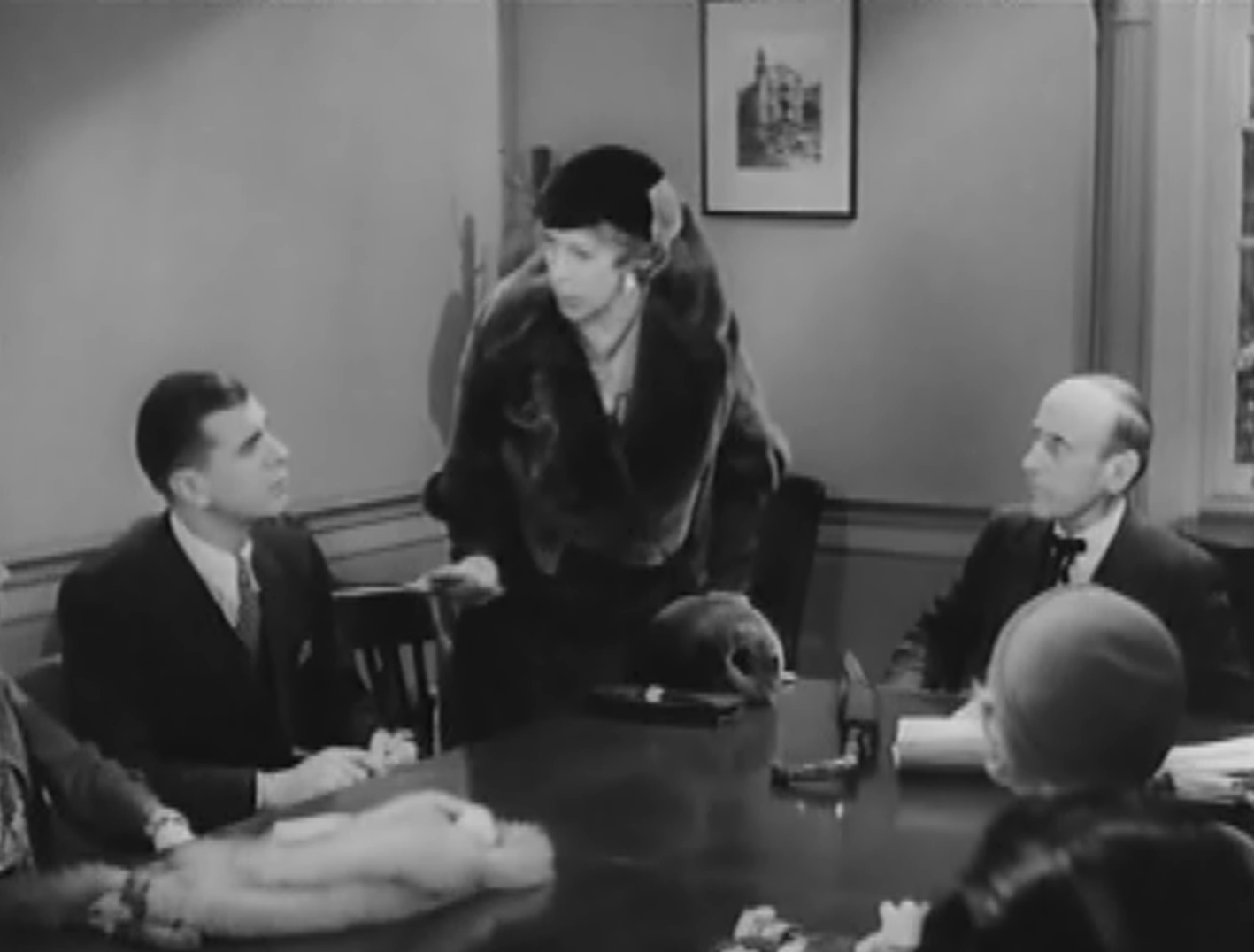 Ladies of the Jury: Hung Up

My father-in-law thinks everything is a ball. Going out to a nice restaurant is ‘a ball’. Watching my daughter drop books on my head is ‘a ball’. Retirement? It’s going to be ‘a ball’. I love the guy, and it’s just the way he talks. But, watching Ladies of the Jury tonight, I have to admit: it’s a ball.

The best way to describe it would be as a footloose 30s parody of Twelve Angry Men. Of course, that precludes the fact that Twelve Angry Men wouldn’t be written for another 20 years; maybe that film was actually a parody of this one? No matter.

Here our intrepid forewoman is Mrs. Livingston Baldwin-Crane (pronounced ‘ball and chain’, pretty much), one of those lively society women who know the world revolves around them. The judge is a social friend and a pest otherwise, and she can hardly sit still as she’s selected as the twelfth juror in a murder trial. But, if she seems flighty, keep in mind that she’s as concerned with the attorney’s ancestors with the proper weight of evidence. As she and the 11 other jurors head into the back room, they must pass judgement on a former chorus girl named Yvette turned gold digger. Did she kill her rich husband?

This premise would seem to set up a mystery movie, but it’s not. It’s much more of a lark; the evidence is never really debated over, but the characters of the witnesses and defendant. Baldwin-Crane engages in this manipulation because she knows she’s right– the case comes down to a “she says” and “she says”, and precious few seem to even question themselves or their motives. (One woman, a newlywed, is aching to get home and can’t imagine why anyone would want to murder a husband– just you wait, lady. Or so I’ve been told.)

Should Yvette be pre-judged because she is a French chorus girl? 11 of the 12 jurors have no problem thinking so when the first round of ballots is cast; Mrs. Baldwin-Crane’s intuition disagrees. Person by person, she makes them rethink their biases– or just bribes the hell out of them– leading to an evening of jabs and jokes.

Ladies of the Jury becomes a comedy aimed at the complete fecklessness and fickleness of human nature, one that attaches deep importance to human life, so much as it doesn’t require too much thinking about it. Edna May Oliver, with her indomitable eyes and puckered mouth, rolls over everyone with delight, always managing the perfect double take exactly when needed. Without being too deep, the movie is consistently funny and clever. And, of course, it’s a ball!

Throughout the trial, Mrs. Crane continues to disrupt the proceedings, oblivious to courtroom rules and customs. She disrupts the lawyers’ opening remarks, and when the witnesses take the stand, she interrupts the lawyers’ questions with remarks and queries of her own. Often her questions are more insightful than those of the lawyers. During deliberations, she cleverly manipulates the other jurors into changing their votes. In effect, Mrs. Crane subverts a sexist justice system, which is about to railroad an innocent woman because her French accent and lowly profession as a chorus girl falsely brand her as a gold digger-every rich man’s nightmare. […] It may be a man’s world, but Mrs. Crane’s feminine intuition and keen understanding of human nature are there to balance the scales of justice.

In the sort of wealthy matron role that would generally involve a lot of pearl clutching, Crane plays against the type as a woman who enjoys the freedom and privilege her wealth gives her and is appreciative of the more playful, racy elements of life. She’s also a straight shooter, whose morals prevent her from hiding behind that privilege. Those morals extend to saving innocent ladies, but not so much to following the law in order to achieve that goal.