Love is a Racket (1932) Review, with Douglas Fairbanks Jr.

Love is a Racket: Taking Your Licks and Liking Them

Let’s take a brief moment and ponder the mystery of Douglas Fairbanks, Jr. Affable, good looking, and all around a nice kind of guy, he’s always stood in the long shadow of his father, Douglas Fairbanks, the swashbuckler of the silent screen. While Senior gallantly rode off into the sunset in the early 30s, Junior became a charming screen star in his own right. He’s essentially Clark Gable but lacking that element of danger– which may make all the difference in the world.

He’s pleasant enough to watch in Love is a Racket, one of those movies that’s fun while it lasts but doesn’t add up to much in between. As an expose on journalism, the power of the mafia and love in the age of the Depression, it makes its inelegant points and evaporates away.

Fairbanks is Jimmy Russell, a gossip columnist whose spare time consists of hangovers and the pursuit of Mary. Mary’s a nice girl, but her Aunt Hattie orders her to be more money conscious in her choice of suitors. Jimmy is flanked by loyal and broke Stanley and obviously-got-the-hots-for-him Sally. 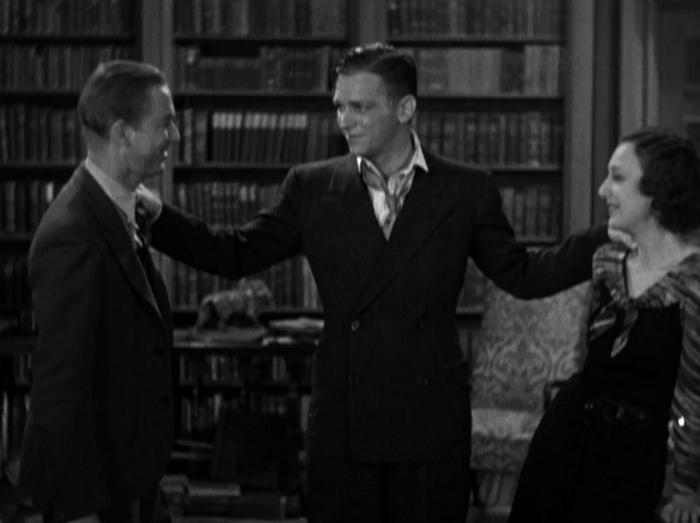 This little love quadrangle of sorts is interrupted by sleazeball Eddie Shaw, a gangster that even the other gangsters aren’t very fond of. He’s a bully and buys ups Mary’s bad checks, threatening to hang them over her head unless she acquiesces to sleeping with him. Jimmy naturally objects, but discovers that he’s not the first person to bring a gun to Eddie’s apartment that day.

Love is a Racket takes its title from a lengthy end monologue from Russell as his eyes are opened up to the new realities of romance in the Depression. Romance is dead; it’s not about how much you care or even the noble sacrifices you make to keep the girl. The only thing that matters now is one thing: surviving.

The film’s general cynicism is boundless, and closely reflects that in other pre-Code films like The Finger Points: everyone is corrupt. Despite the constant presence of the mob, both poisoning people and threatening women into prostitution, the most in-depth investigation the police conduct is on a photo of an attractive starlet on the front page of the evening paper. 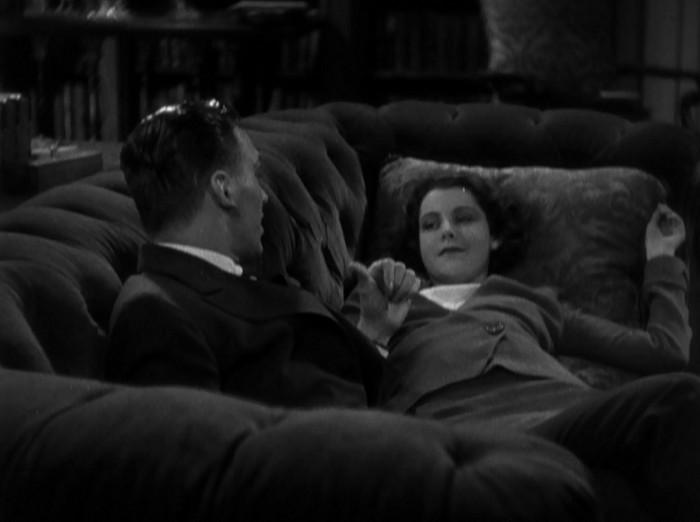 In this scene our charming hero warns that she had better surrender soon or “You’ll have to marry me to make an honest man.”

That cynicism is something that Russell tries to desperately embody. His role as a gossip columnist also lends him privy to underworld shenanigans, something he not only doesn’t cover but orders his papers to pass over, even when it’s something as dangerous to the public as tainted milk. Russell is always looking out for number one, and by film’s end has only broken this rule once, in falling for the gold digging Mary.

Fairbanks is good in his role, a smooth, handsome man whose egotism never becomes hideous. His reaction as he helps to conceal a crime really sells the horror of the moment, making an emotional connection in a film that feels alien most of the time. Lee Tracy and Ann Dvorak are fun as the sidekicks, even if both feel underused. The only other actor who gets much chance to leave an impression is Warren Hymer as a practical joker/henchman, who is both intimidating and goofy, an interesting combination.

Director William Wellman’s camera is stylish but stuck in the same seven or eight sets and the shots lack much texture. When he’s on, he’s on– the murder late in the film is drenched in torrential rain and filmed with a inscrutable sense of dread. The lengthy end monologue performed with Fairbanks’ back to the camera is another treat, a deliberate attempt to break up the film’s hoary moralizing by making the audience do half the work with their imaginations. 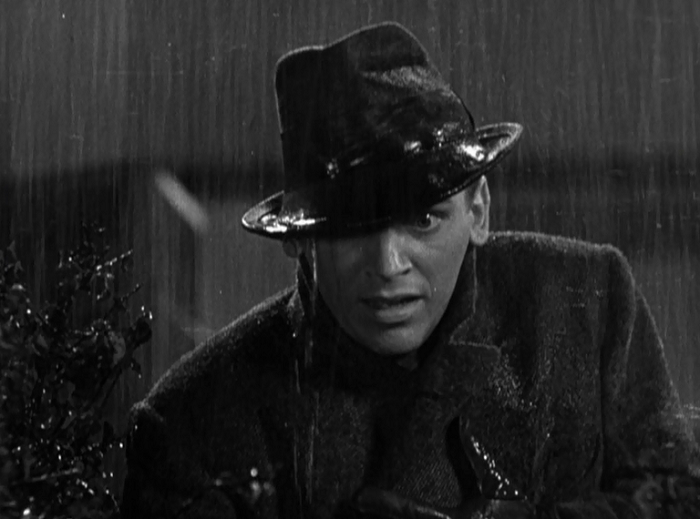 Uh, I don’t think the other guy stuck the landing.

Love is a Racket  is a fine Douglas Fairbanks vehicle, showing a guy who could be rough and tumble, but funny and smart, too. It’s also an unnerving portrait of its own era, where everything in society is broken, save the ever resilient heart. While it may be a combination of a little too stodgy and a little too schizophrenic for my tastes, it’s another film that serves well as a time capsule in how far the American spirit had sunk by 1932.

Fairbanks had script and director approval, no doubt a courtesy to the son of one of the industry’s founding fathers. Only Richard Barthelmess, a more established star at Warner Brothers, had the same privilege. But Fairbanks, just 22, was hot, thanks to both his smash hit in The Dawn Patrol, and his high wattage marriage to Joan Crawford. The gorgeous couple received thousands of fan letters every week. He had been “plunged into the assembly line at the Warner’s film factory and averaged five films a year there between 1930 and 1933. He recalled a typical working schedule at the studio as ‘sometimes ten hours, usually nine a day–six days a week! Sometimes less, sometimes more!'”

There’s nothing quite like this film’s ambitiously cynical ending, the sort of loose-ended defiance of the crime-must-pay adage only possible in pre-code conditions.  Dialogue is pitched at such a darkly cynical height that censors ears weren’t young enough to hear it: “Looks like you been up at Sing Sing looking at a burning!” 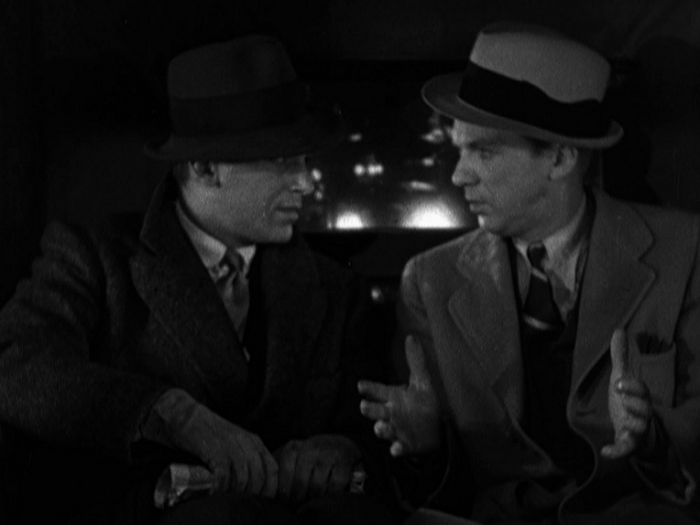 What are friends for?

“Love is a Racket” [is] based on a novel by former newspaperman, Bian James, adapted for the screen by Courtney Terrett [and] is unpredictable in style, but thoroughly entertaining. One of the more unique aspects about the film is there is hardly a moral character to be found. Our alleged hero, Jimmy Russell (Fairbanks), a Broadway columnist for the New York Globe can do or not do the right thing. Mainly, he does what’s best for Jimmy.

I haven’t seen this one, Danny, but it certainly sounds interesting (love your description of a “love quadrangle”). Your description of Fairbanks, Jr. is spot-on. He was much more charming than menacing, which is why he was a good Rupert of Hentzau in THE PRISONER OF ZENDA.

There are so many Zenda movies out there, I had no idea he was in one of them. But, yeah, Fairbanks is a sweetheart. He’s also very funny in Loose Ankles, and I’ve got plenty of his others to track down as well!

Before I forget, Frances Dee and that round little face. She reminds me so much of Mary Brian. I had to take a second look.

Anyway, whenever I see Doug’s face or name I immediately think of my youngest sister. She loves Douglas Jr with every ounce of her being. It’s quite cute. A few years ago I gave her one of my autographs of Douglas nicely framed with a glam photo. She adored it. Not long after Katrina swept through Biloxi where she had just moved to be close to my retired parents. Long story short. When they evacuated and everyone was grabbing their clothes and electronics my sister took Doug off of the wall and she kept him close to her that entire time. I found it hilarious but so endearing. They lost everything but her precious Douglas survived.

I’ll be sure to email her you fun little view of a film I’ve actually seen only once a long time ago. While I enjoyed Doug in this genre I’m such a huge fan of his action films like The Prisoner of Zenda or even Our Modern Maidens with his crazy wife, Joanie.

One other thing on this film. Why are guys who are up to no good always named, Jimmy? ha ha (Probably very few but it seems that way.)

A fun little film and a nice review.
Page

That’s an adorable story, though I’m not sure I own anything that valuable to me, save for my big book of movie ticket stubs. So many great memories kept in there. But, then again, in the face of Katrina….

Jimmy is a popular name for guys on both sides of the law in the early 30s, though anyone who doesn’t get a first name is far more suspect. 😉

Wait until you see UNION DEPOT — that’s Fairbanks Jr. at his best! (Also a fantastic film in its own right.)

I loved this one – I’ve read somewhere that Cagney was due to play Jimmy at one time, but for some reason or other didn’t. It might just be the Wellman film with the most rainstorms, though there is a lot of competition for that title!

Ha! Yeah, even compared to Central Airport’s hurricane, this film is still pretty moist. And I can’t even imagine Cagney in this one; he definitely would have brought a different energy to it.

I enjoyed your review Danny. I watched ‘Love is a racket’ for the second time last night and have been searching around for reviews on it. The movie wasn’t anything to write home about but we enjoyed it and I was interested in finding out more about it because it’s precode. I always enjoy your reviews the best since you view it from the precode angle, which I’m really interested in. My husband and I both thought that Doug showed a remarkable resemblance to Clark Gable, particularly early on. I loved Union Depot too – a cute little movie with Doug and Joan Blondell, one of my favourite precode actresses.