“And I’m not sure, maybe ideals have ceased to exist. Maybe they’re outmoded like oil lamps and horse cars. But they’re mine, and I’m stuck with them.”

It’s all about the title. Manhattan Melodrama, with three of Hollywood’s greatest stars, is contrived and silly. It’s a tragedy in the Greek sense, with destiny foretold since the characters’ childhoods and written in the stars.

The two young boys are Jim and Eddie, the former a studious young man and the latter attached to a pair of dice. (Manhattan Melodrama is notably the only film in history that would ever imply that Mickey Rooney could possibly grow up to be Clark Gable.) After their parents die in a maritime disaster, the two boys are adopted by a nice Jewish man before he, too, dies.

The film wisely spares us another near-comical scene of parents being murdered and children crying and moves on to the adulthood of Jim and Eddie. Jim’s a respected Assistant District Attorney while Eddie (nicknamed ‘Blackie’) runs an illicit gambling joint. Both are highly respected in their fields, wither it’s lawyer or, you know, gangster. 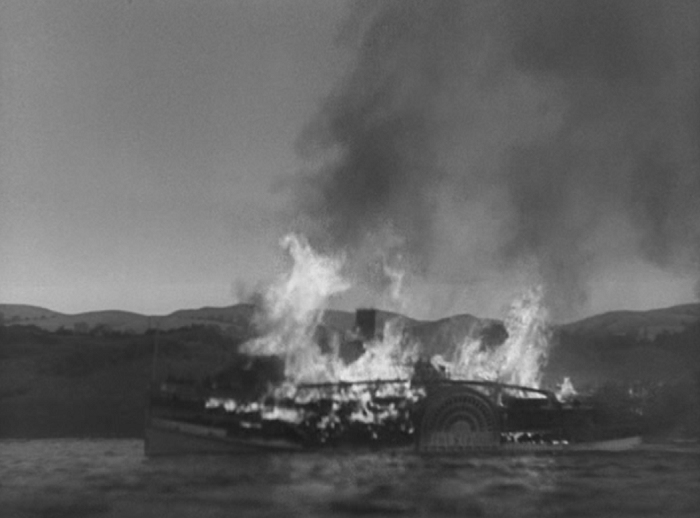 The two remain good friends, even if they see each other rarely. The main point of imbalance between the two is Eleanor, a lovely girl who’s content with Blackie until a night out with Jim shows her all she’s been missing in terms of class and kindness. As she notes, she’s particularly pleased that when she goes to dinner with Jim, “he wouldn’t make dice out of the sugar cubes”, a wonderfully potent image.

Blackie takes this fairly well, but Blackie takes everything well. He’s supportive of Jim to a fault, which is finally what unravels him. As Jim attempts to make the ascent to Governor, Blackie learns from Eleanor that he may be blackmailed for not prosecuting one of Blackie’s crimes. He opts to murder the blackmailer, but is caught and successfully prosecuted by Jim. Blackie wouldn’t have it any other way.

So the conflict finally comes down to the newly installed Governor of New York having to decide whether he should pardon or commute his friend’s death sentence, even if he expressly knows the man is guilty. And Eleanor makes it quite clear which side Jim should fall on, politics be damned. 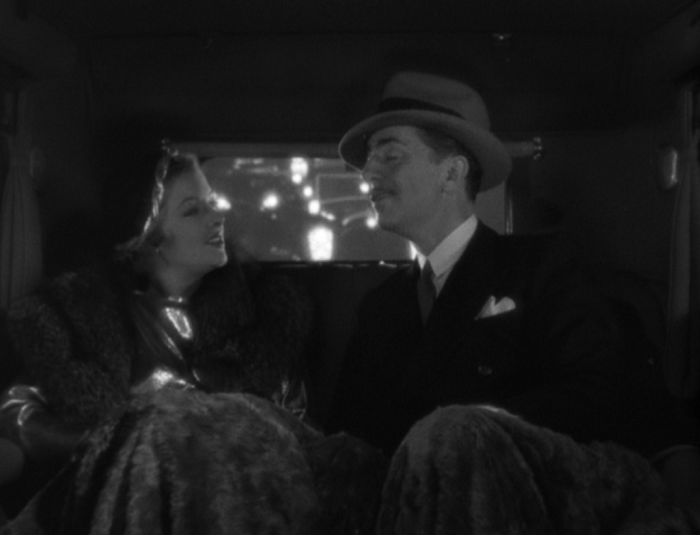 A match made in the back of a taxi cab.

Manhattan Melodrama remains well in the tradition of earlier movies from the early 30s, like Madame X and Frisco Jenny, whose plots are carefully engineered for the maximum amount of tear-draining hysterics. There’s hardly a natural bone in its body, even if it draws upon a great deal of New York history and atmosphere to manufacture its premise.

Blackie and Jim are impossible ideals. The noble criminal and the pure public servant, played by two of the most charismatic actors to grace the screen in Gable and Powell. While Powell and Loy get a chance to show off their immaculate (and soon to be immortalized) interplay, Gable’s criminal waltzes off with the picture.

Blackie is noble to a fault, a friend unbelievably good natured and self sacrificing and a whole lot of other traits we all wish we saw in ourselves, no matter how flawed he is. There are only four scenes shared between Powell and Gable, and only three in which they converse. It’s Gable’s final scenes here that their interplay makes the most of the picture. Nobly sitting on death row, Blackie is gleeful on his martyrdom to his friend’s life and career. “Die the way you lived, all of a sudden,” he decides, “That’s the way to go.” 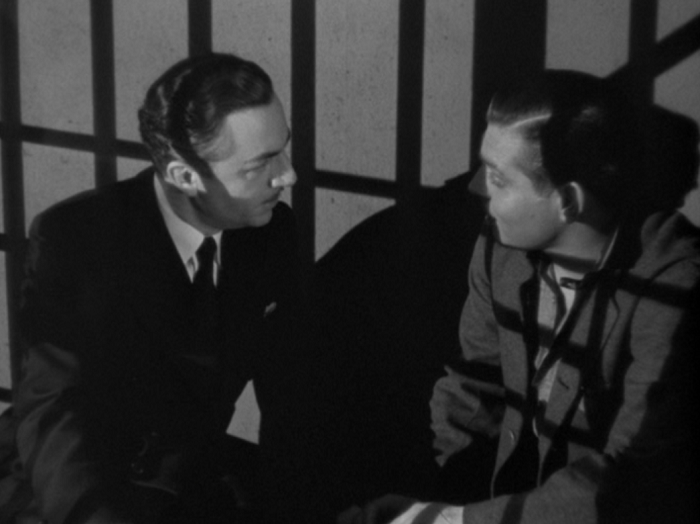 “Of all the prison cells in all the world…”

When Jim wavers on whether or not to pardon his lifelong friend and brother, Blackie is handed a bottle of booze he asked for. “Give it to him,” he motions to Jim. “He needs it more than I do.” It’s completely crazy, a romantic view of friendship and nobility that seems to come more from the annals of A Tale of Two Cities than reality.

There’s good supporting work here, too, with Nat Pendleton as Gable’s dim-witted right hand man (whose girlfriend has an obsession with hot dogs and picking men’s pockets which is borderline risque). Pendleton’s best scene, after spending the movie as the usual dumb henchman, is his last, where he’s in the press room, desperately trying to get any of the assembled reporters to believe that he’s the real killer and Blackie should be freed. It’s a level of humanity that the side characters in movies like this rarely get.

Director W.S. Van Dyke gives the movie a light air, but mostly just gives the film over to its performers, who are more than game at such creaky material. Loy works perfectly as the glue between the two men, a thoughtful woman who finds love for two different men who simply thrive on impossibility. With the three ace performances, Manhattan Melodrama is an old fashioned work, but a pleasure for those who don’t mind indulging it in that way. 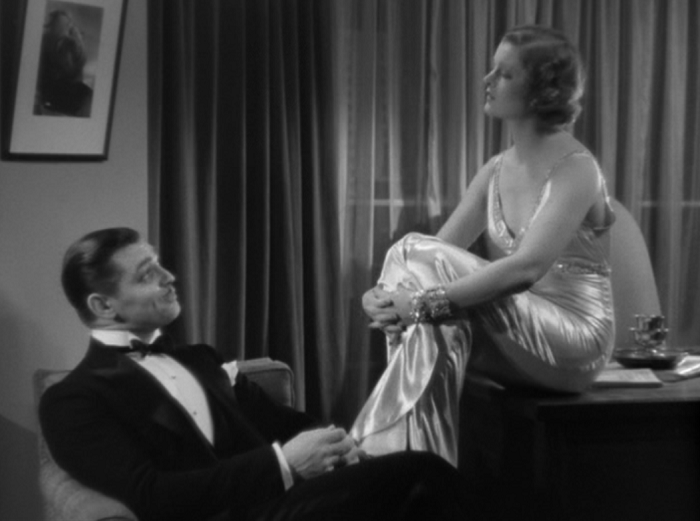 The perfect dress for lounging around.

For all its larger-than-life storytelling, its peculiar attempts at comic relief (Muriel Evans’ running gag as a gangster’s dopey moll is a hoot), and its portrait of Jim as a man so upright he couldn’t possibly exist on this planet, “Melodrama” remains a thoroughly engaging piece, one that leaves us questioning ourselves. Can Jim remain righteous and set his friend free? Considering Blackie’s actions led to Jim’s election, should he even remain in office, or, since such things remained out of his control, is it excusable for him to stay in power? The drama may be clunky and old-fashioned, but once “Melodrama” gets rolling, it never stops engaging the viewer. 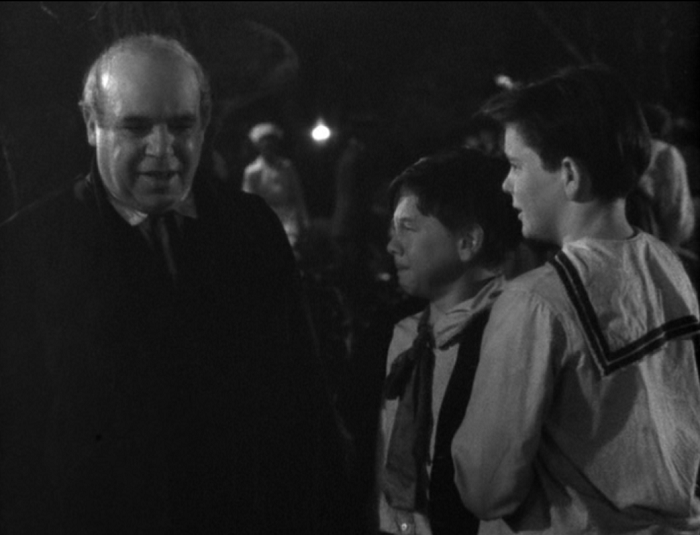 It is a lovely lesson in brotherly love that is sometimes true even if it is not universal, and our inclination to smile or roll our eyes at such innocence is condescending. 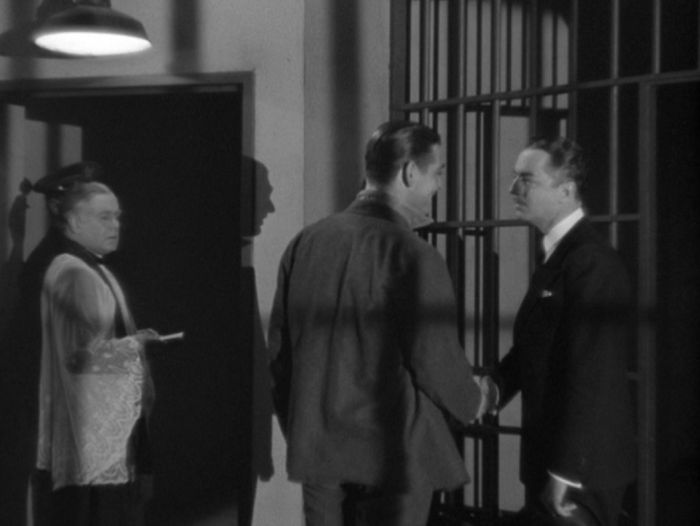 “So long, and thanks for all the fish. Except that last meal, that was a bit overdone.”

I’ve seen Manhattan Melodrama many times, starting as a kid back in the 1950s. It’s one of my favorites.

Glad to hear it! It’s a very nice little film I think.

One of Manhattan Melodrama’s peculiar claims to fame is that this is the film John Dillinger went to see before being shot down by the FBI outside a movie theater (the one playing this film). A rather morbid little film history footnote.

Shoot, I meant to mention that in the trivia. But, yeah, one can imagine Gable’s final lines ringing in Dillinger’s ears that night.

I love this movie. You can’t beat a love triangle with Myrna Loy at the center. Everyone is so civilized. Like Test Pilot, only that triangle is a little oblique, with Clark Cable in between Spencer Tracy and Myrna Loy. What a great post

Thanks! And I’ll have to check out Test Pilot– always interesting when a woman says no to Clark Gable!

Nice tidbit. Hard to blame him for that one!