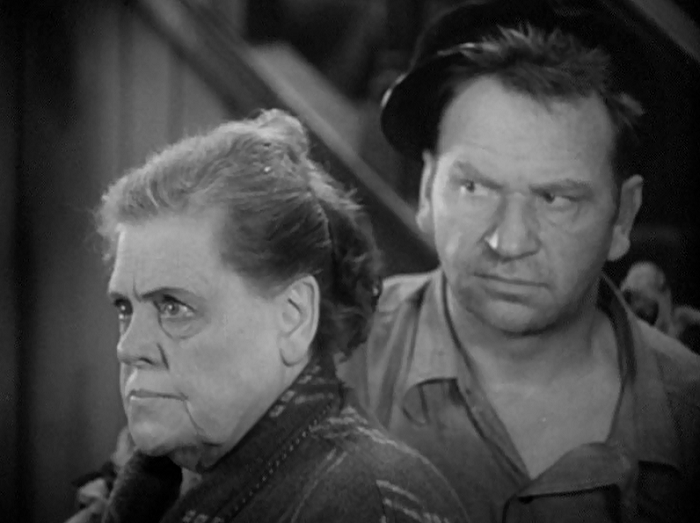 Min and Bill: Old but Lively

My wife was just up here in my loft to discuss dinner options, which extrapolated to, as all conversations seem to do around here, the prospect of adopting more dogs. This conversation inevitably turned to me implying that, if our dogs Harpo and Chico were Nala and Simba, then I was obviously Timon and she was Pumbaa. This did not go over very well.

That kind of relationship– full of playful give, take, and optional impolite Lion King analogies– is one that you rarely see in films beyond sexually charged flirtation. It’s a kind of comfortableness with another person, a sense of reverie that isn’t hostile but the sign of a warm, loving relationship.

And while today’s Min and Bill features no overt nods to the Lion King (though there is a connection to Disney; keep reading for that), its best moments are about a pair of cantankerous old fogies and how their begrudging affection gets them through so many hardships.

It’s worst moments come, of course, from the film’s goofy plot. I’ve described variations of the cliches present at least a half dozen times so far, so stop me when it begins to sound familiar.

Min runs a dockside hotel/cafe/barbershop, while Bill is a boat captain who lives in one of her rooms. They have an on-again/off-again/murder each other on occasion kind of relationship. Min has raised a girl, Nancy, almost from birth since her mother walked out on her. Nancy is worked to the bone, but this is mostly so Min can keep the many sailors who come into the place a healthy distance away. All the while Min also keeps having a dream, a dream about a canary hitting a window…

While it’s easy to have Bill belt a sailor who gets too frisky, things become less clear when the police show up and demand that Nancy begin to attend school. Min reluctantly relents, and forces the girl to go live with a local school official for her own good.

This is can be explained by Min’s character. Min isn’t a woman to mess around with– she puts a razor to Bill’s throat when he implies the last time she was considered a beauty was the Civil War– and like Bill she can be both crudely off-putting or sweet as the mood strikes. However, there’s only one person in the world that Min is afraid of, and it’s not even mean old Wallace Beery. It’s actually Nancy’s mother– Bella.

Let’s step back for a second. Like a lot of movies from the time, Min and Bill sets up early the idea of the ‘haves’ and the ‘have nots’. While a lot of movies these days view the triumph of the have nots in how they demonstrate to the haves their validity as humans by proving the haves are just as petty and fallible, this scenario wasn’t quite viewed with such egalitarianism in the 30s. Success for the have nots back then was to become one of the haves. Unsurprising considering the Depression’s sudden necessary emphasis on and the continued American enthusiasm for a monetary fetish.

Bella is the extreme end of have not. Rather than strictly being poor monetarily, she’s bankrupt in spirit as well. Loud, crass, and seeking to exploit all around her, the moment she shows up she is drinking with Bill and asking Min to see her daughter. Not for sentimental reasons, of course, but for someone to use.

Min spins a lie to Bella, telling her that her daughter died a few years back, and Bella’s is devastated that now she won’t have someone to take care of her in her old age. The relationship gets even more rocky when Min kicks her out after catching her on Bill’s lap.

Bill gets it worse via being chased around with an axe– I shit you not– and after the two reconcile, we fade away to a few years later. Nancy hasn’t seen or heard from Min, but Min’s followed her educational career with restrained hope. Nancy’s done so well in school that she’s now a lady, and has even become engaged to the rich son of the local cannery operator.

When Bella returns and figures out that Min had lied about her daughter’s fate, it’s time for a showdown. Will Min see her adoptive daughter married and ushered into a life of wealth and privileged, or will Bella show up to the wedding and possibly throw Nancy’s life into a tailspin? As Bella so effortlessly puts it, “They can pay to get rid of me! Plenty do!”

Outside of this drama– yes, take a shot, this is a ‘Woman Sacrifices Everything For Her Loved One’ storyline that we return to regularly– the film is pretty solid. Beery and Dressler have a beautiful, lived in sort of camaraderie that makes their scenes an awful lot of fun. And, hell, the cliched nature of the plot isn’t a complete waste, since Dressler imbues it with such a gruff sense of determination and heartbreak, that her character is wonderful just to follow around. She knows that if she sticks around Nancy that the girl will never get the chance to fit in with proper society, and so she must keep pushing away this girl that she so obviously cherishes time and time again.

The problems come in small but stiff stretches, like an early ludicrous slapstick sequence which sees Min and Nancy behind the wheel of a runaway boat. It kills the film’s fragile narrative momentum, and isn’t the first time that the movie is more interested in broad comedy than the more playful, earthy type it excels in. Add in the usual early-talkie troubles that you get in movies like this– long pauses and some wooden camera angles– and the picture simply becomes moribund for long stretches of time.

But it still has Marie Dressler and Wallace Beery. While its plot may be a cover of an old song, these two give it some pizzazz.

One Reply to “Min and Bill (1930) Review, with Marie Dressler and Wallace Beery”