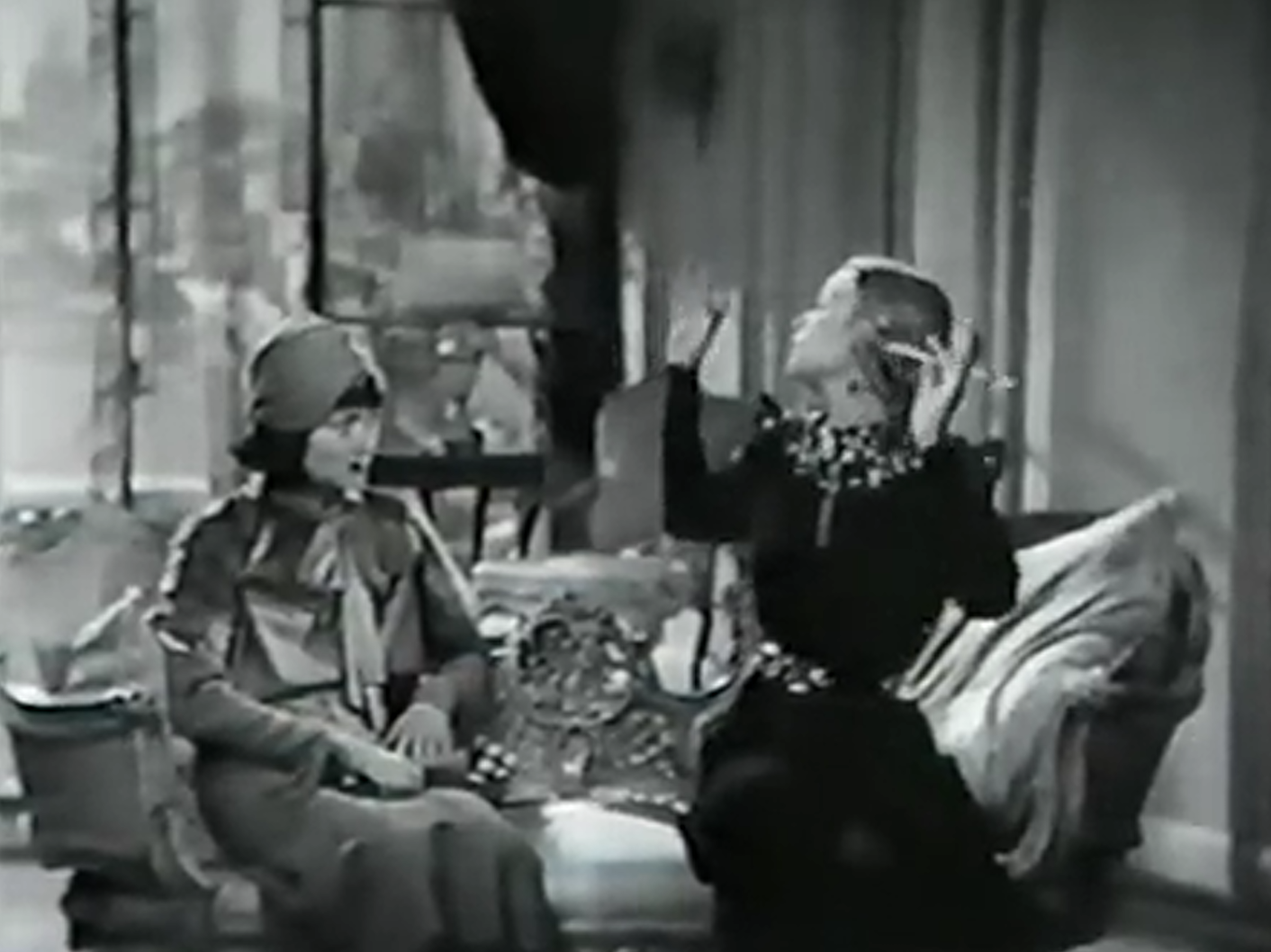 “I’ve seen some queer things in my time, but this is the first time I ever saw a two-sided triangle!”

Before we delve into the mess that is Moulin Rouge, you need to understand something about the picture. It was a popular practice to use scandalous names to sell films to audiences in the early 1930s– Sinners’ Holiday, Safe in Hell, etc– and what better name is there than that of the Moulin Rouge, the famous Parisian nightclub that invented the can-can dance? It promises sex, sin, and all sorts of good times.

With that in mind, I should explain that the modern day equivalent of the 1934 Moulin Rouge is if someone took a comedy like Bring It On and renamed it Teenage Cheerleader Slutastic Sex Pyramids 4. Its title is wholly misleading, a distinct attempt to create a scandalous aura that the breezy comedy underneath doesn’t resemble at all.

It definitely doesn’t help that the breezy comedy is pretty lame, despite some rather nice trick photography to back it up. You see, it goes like this: Broadway writer Doug refuses to let his doting wife go into the theatre despite the fact that she had a fairly decent career before they got married. Helen is livid, and plots out the perfect revenge plan. Her old friend and practical twin, Raquel, is a famous singer at the Moulin Rouge and is coming to New York to appear as the star in Doug and director Vicky’s latest show. Helen will substitute for her friend in the play while testing her husband’s fidelity and proving herself a great actress.

Things go awry, as they must, as Helen becomes terrified that her husband is in love with Raquel (who, at this point, is also her). Or maybe that he’s on to her charade. Or maybe both or neither. She gets flustered and Doug appears to have no qualms about making out with a woman who looks exactly like his wife but with a different hair color and a French accent.

Look, I can’t blame him for that (don’t tell my wife), but there’s not enough of a spark to make it interesting. It’s not farcical enough to build on previous laughs… nor are there many initial laughs as the case may be. Helen is a bundle of nerves, Doug is more or less a sleazeball, and Hobart Cavanaugh’s role as a drunken lout who pops up to mutter a few slurred lines on a regular schedule is maddening.

The redemptive features in the movie come in its climactic musical numbers, since Bennett is somehow a better singer with a fake French accent piled on. The numbers are clearly Busby Berkeley influenced, though not as accomplished. Lots of pretty faces on display, a few naughty double entendres, and women dancing in next to nothing. One of the better numbers resembles “The Broadway Melody” from Singin’ in the Rain, only its a pastiche of Bennett’s character as she moves up to the nightclubs from the dance halls. They’re cute numbers, but suffer from mediocre music and a reliance on extravagant sets over clever or peppy camera work.

But let’s talk about Constance Bennett, who is horribly underdiscussed on this site despite being one of the most popular stars of the early 1930s and, in fact, at one point being the highest paid woman in the world. She made a name for herself in pictures like The Easiest Way, The Common Law, and Lady with a Past, in all of them playing good women who strayed into sin and came to regret it. Sometimes she found redemption, sometimes she didn’t, but she was deeply sympathetic, a woman struggling to survive in an extremely inhospitable world. It was a popular trope, and Bennett made bank on it.

The problem was that her real life push for more money and unwillingness to expand her repertoire soon soured audiences mired in the Depression. Constance didn’t mind churning out whatever was handed to her so long as the check was big. It was too apparent that the Constance on screen and the Constance in real life were unrelated– her image was disconnected.

She is a fantastic actress though, even if she sometimes got stuck in ruts of similar characters or films like the legendarily bad Rockabye. She has a remarkable ease in front of the camera that few other actresses ever had (watch her shimmy in Topper if you ever need proof) and a languishing charm that’s hard to resist.

Bennett is especially sublime in Moulin Rouge and easily a powerhouse, playing two women with four accents and still more names than that. What’s remarkable is how she manages to endow both characters she plays with different body language and even completely different fake Parisian accents. She plays off herself quite well, though, when it comes to squaring off against Doug, she’s often stuck worrying rather than delighting in her own trickery.

The rest of the cast isn’t anything to write home about, with Franchot Tone stuck in a lame ‘he-man’ character who melts and bows to whims far too easily. Ivan Lebedoff pops up as Jackie’s lover for a few brief moments, and did I mention that Hobart Cavanaugh really is a big ol’ nothing here? I should, if I haven’t.

Moulin Rouge is kind of a bummer. It lacks the gleefulness of other post-42nd Street revues like Murder at the Vanities, and its farce is too tired to matter. It’s a rather limp affair, and a crummy waste of talent.

According to a news items, the film was publicized with a special train from Los Angeles to Washington, D.C. and then New York, carrying a number of motion picture stars, in a similar manner to the way 42nd Street, which was also a Zanuck production, was publicized in 1933.

It is interesting to note that none other than Helen Westley, the well-known actress who is a member of the board of directors of the Theatre Guild, makes her debut in this production as an elderly woman named Mrs. Morris, a retired stage luminary who is in a measure responsible for Helen’s huge success. Miss Westley, it is almost superfluous to state, is excellent in this role.