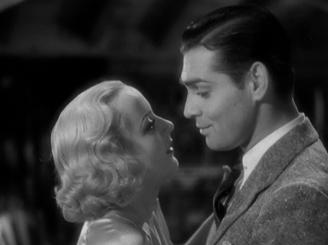 There’s a glamor and suaveness that one can easily associate with the films of the 1930’s. Men in tuxedos, women in evening gowns, lounging around luxurious apartments and sipping on martinis. While the poor of the Great Depression went to the movies to escape their drudgery, the movies were all too happy to reciprocate.

Falling somewhere between the high life screwball comedies like My Man Godfrey and the straight played romantic thrills like Dodsworth, 1932’s No Man of Her Own occupies a strange middle ground that isn’t easy to classify.

Clark Gable plays a card shark, running a rigged game that he lures socialites to. When a vice detective finally catches wise, Gable makes a break for small town America, closing his eyes and picking out on a map Glendale. There he finds a town similarly obsessed with gaming: a slots machine in the general store, two old men playing checkers, and a girl that shakes dice with the newspaper salesman as a morning greeting.

The girl is Carole Lombard, a librarian sick and tired of the provincial life. She gets to know Gable when he comes in and needs help finding a library book. Only it seems to him that any book will do as look as he gets to watch Lombard do the looking.

The library scene is the best in the movie, as the jokes are quick and the writing hits its stride. Lombard ponders the handsome suitor with a coworker. “The girl who lands him will have to say ‘no’ and put an anchor on it…” she sighs. “But isn’t it tough when all you can think of is yes?”

Eventually Lombard and Gable end up in a cabin out in the woods, where the question of sex is obfuscated to an almost amusing point, but it just comes down to the fact that Gable wants it and Lombard won’t give it… depending on a coin toss, that is. Heads it’s to the bed, tails it’s to the wedding altar. And since this movie isn’t about the joys of unwanted pregnancy, we’re instead treated to their sudden nuptials.

And as soon as the ring is on her finger, Gable heads back to New York– the heat is off, and it’s time to make some more money. Now the only trouble is trying to keep how he actually makes a living from Lombard as she basks in the glories of posh New York.

And that’s pretty much the rest of the movie, that give and pull as Gable is slowly forced to go legit right before he has to make the big decision; the girl or his way of life. It ain’t much of a choice, to be truthful.

Lombard is a far sight from the dizzy dames she would perfect in My Man Godfrey and To Be or Not to Be, and spends most of the film with her feet firmly planted on the ground. She’s charmed, flattered, and all too glad to be swept off her feet and back to New York– but she definitely knows it’s all too good to be true. She plays tough and smart beat for beat, getting what she wants with her wits and own love of relying on luck.

Gable is, as only Gable and Cary Grant can be described, charming as hell. Though he’s lacking his pencil thin mustache, he’s fully perfected his smile, his repartee, and everything else you want from your scumbag cheat character with a heart of gold.

The film they’re in is pleasant enough; it’s only funny sporadically, and the conflict isn’t much of one. But when the two leads come together, it’s nothing but good old fashioned fireworks.