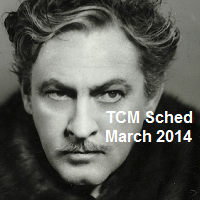 Welcome again to the show that never ends! I hope everyone enjoyed my mostly-William Powell February, since he truly is the best expression of love in such a romantic month.

We’re three months into 2014 now and I’m not sure if anyone picked up on this, but I’ve been hitting 1934 releases pretty hard this year. I figured hitting the 80th anniversary of most of the movies are fun, and considering all of the lists I have on this site, it’d be nice to try and finish a chunk of one off.

For those of you keeping up with my personal life, we’ve finally been assigned a house and moved in this last weekend. That means that our dogs, Harpo and Chico, are finally out of the kennel and can resume their hobbies of sitting and staring at me for hours on end.

As for Japan in the greater sense, my wife and I went up into Tokyo over President’s Day. There’s a massive shopping complex there called Roppongi Hills where they have a very nice movie theater that was showing Gone With the Wind. For those of you curious, most English language movies shown in Japan are subtitled (thank goodness) unless they’re animated. Anyway, my wife had never seen it, and I told her that Gone With the Wind is a movie I will only watch in the theater.

She had somehow doubted that the most popular movie in the history of the world would ever show up in Japan, but I proved her wrong with that one. For a 10 AM showing, the theater was surprisingly full, and the presentation was absolutely lovely. So, if you’re ever in Tokyo and they’re showing it, check it out. 🙂

As for the TCM schedule below, it looks like Mary Astor is star of the month, so there’s a bunch of rare goodies from the early 30s with her popping up. There’s also a morning dedicated to Betty Compson (who I’ve never even heard of) and a morning of William Powell rarities that are worth catching.