“Have you ever tried rubbing alcohol?”

It wasn’t until about ten minutes into Playmates that I realized that I was watching John Barrymore’s last feature film. I didn’t look it up, mind you, but you can tell just by watching the movie. By 1941, John Barrymore– considered one of the greatest Shakespearean actors of all time and one of the more charming pre-Code actors out there– was all washed up, and Playmates takes a great delight in tap dancing on his bloated remains.

Let’s step back a minute and look at the time period. Released in 1941 and already all dressed up in red, white, and blue, Playmates is essentially a showcase for swing band leader Kay Kyser. He’s a soft spoken conductor who spends most of his time soft shoeing rather than conducting, but, being a film, the band is always a-okay without him, and will sometimes pop up with helpful props and other dancing moves. It’s all very innocent, early-1940s stuff, where all human interactions read like the latest strip of “Blondie”– or any strip of “Blondie” for the last 70 years. 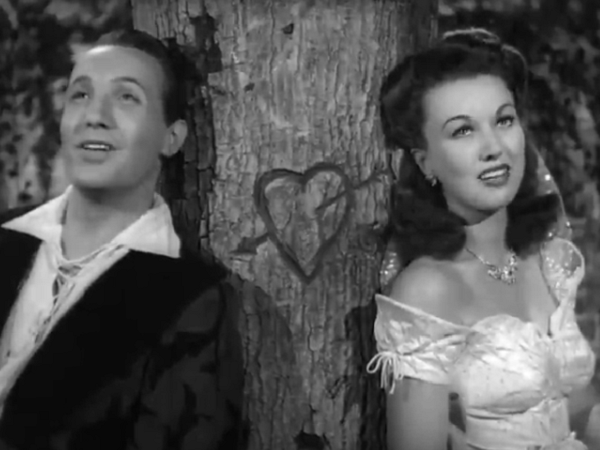 Kyser has a problem, though. He’s too nice. The tabloids love him, reporting on things like his afternoons spent with his grandma, but there’s no excitement attached to his name. However, his press agent runs into John Barrymore’s press agent– yes, both Kyser and Barrymore are playing themselves. Barrymore’s publicity agent is flustered because the star has such a reckless reputation that nothing he does can get him in the newspapers any more; his alcoholism and divorces have made the media inured to his machinations.

But wait! What if we take the ‘gosh shucks’ Kyser and plant a news story that he’ll be learning Shakespeare under the impertinent Barrymore? The prospect doesn’t wow either man, but neither are in a position to do much about it. They need each other, for better or worse.

We first find Barrymore in the movie pacing furiously, and suddenly we’re confronted with a disheartening irony: a movie about a drunk, desperate man named John Barrymore who will cheapen himself for a bit of money stars a drunk, desperate John Barrymore who cheapens himself for a bit of money. There is a haze over his eyes, but the movie is completely merciless, turning the character of John Barrymore into a histrionic lout. Only for a brief moment near the beginning of the picture, when Barrymore offers a demonstration of his Hamlet, does that haze ever evaporate:

You see something real there, something yearning to get out during that speech that is missing from Barrymore in the rest of the film. There’s the man underneath, the pieces of the puzzle to why his name is still mentioned with admiration today.

But the movie barely even gives him that. He’s back to buffoon in a flash, Oscar Jaffe without a heart, gesticulating wildly throughout his last dance with the cinematic devil. His personal life is a punchline, and the movie does its best to further drag his name through the mud. Barrymore goes to see a psychic before making any decisions (in the movie’s reality, paid off by his press agent, Lulu) and also uses the opportunity to romance Kyser’s band member Ginny Simms. Ginny is pretty in that 1940s way, but not particularly interesting. The movie functions on the law of pairs, though, and her clean cut ways in a Production Code world mean that she shan’t touch what Barrymore so willingly offers to put in her hands, but will simple mindedly go along with his flirtations. She remains a bit dumb as a result (thanks again, Production Code) but pure for when Kay can finally get his act together and seduce her properly. 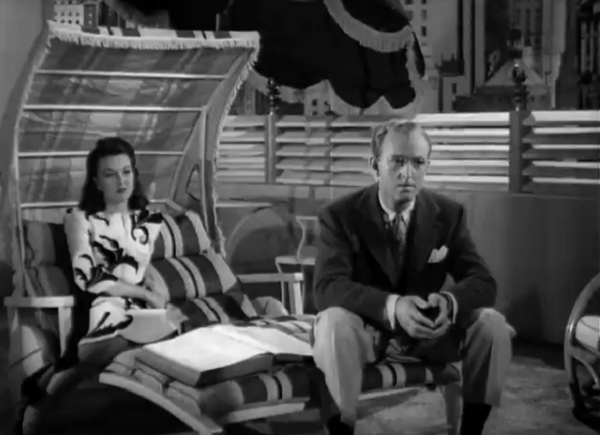 The romantic chemistry here is off the charts. Or, to be more accurate, it’s so insignificant, it couldn’t be charted.

Before that, though, the film decides to up the pain levels for all involved by bringing in an old flame of Barrymore’s named Carmen Del Toro, a female bullfighter whose only purpose in life is to get Barrymore into another marriage. Somehow escaping the use of her real name, Del Toro is played by another pre-Code star, Lupe Velez. Anyone who has ever thought that Barrymore chewed the scenery needs to watch a few Velez movies– the woman is a mess of frantic kinetic energy in a desperate search for meaning. Worse, it’s easy to tell when her ‘sound and fury’ act is phoned in– and this one may as well have come from the Galapagos.

Besides the aforementioned, the movie has a host of other supporting characters to pop up and deliver lame jokes. May Robson, the Lady for a Day, gets a beefy role as Kyser’s society grandma who agrees to put on a massive Shakespeare festival for him to show off his talents. Kyser’s big band provides much of the rest of the comic relief, including Ish Kabibble, who is sort of a poor man’s Jerry Lewis.

Scratch that. No man is that poor. 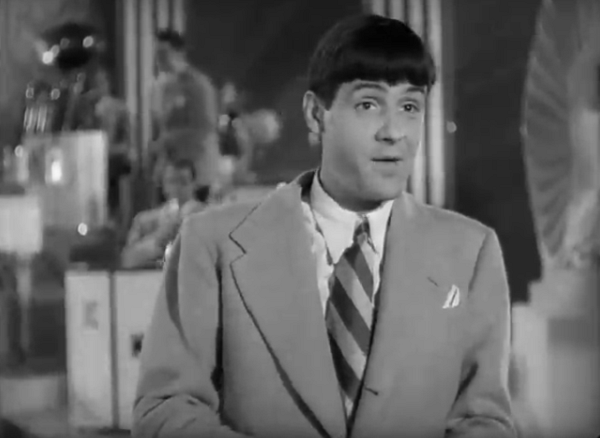 Director David Butler’s credits include a spate of Shirley Temple movies and even a few pre-Codes such as 1930’s Just Imagine. His loopy sensibilities play well when the movie becomes loopy too. Kyser has an extended dream sequence wherein Barrymore and Velez haunt him, first as little imps that poke at his sleeping face and then later when he must fight a bull with Barrymore’s head. They’re the only few moments of the movie that reek of creativity, but they’re still never fun or amusing. They’re there.

The film climaxes in a swing band version of Romeo & Juliet, which, admittedly, sounds much cooler than the actual result. Instead of taking the classic tale and adding music, they use a few other methods of punching up the play, adding lingo and changing the plot beyond recognition. Romeo Smith is now a swing dance band leader and Juliet Jones’ father is fervently against it until he sees how much money Romeo is making. Admittedly, I suppose if you were to truly Americanize Romeo and Juliet, giving it a happy ending contingent on monetary success is probably the most ideologically pure way to do it.

As for Barrymore, a late-film attempt to get Kyser to give up the goat by spraying a mouth-numbing agent down his throat backfires. Barrymore instead gets a dose himself via champagne, and, in front of a crowd of hundreds, puckers up and can only speak as if his tongue were made from ice cream. In his final few minutes of his final film, we’re treated to Barrymore getting laughed off of the stage. 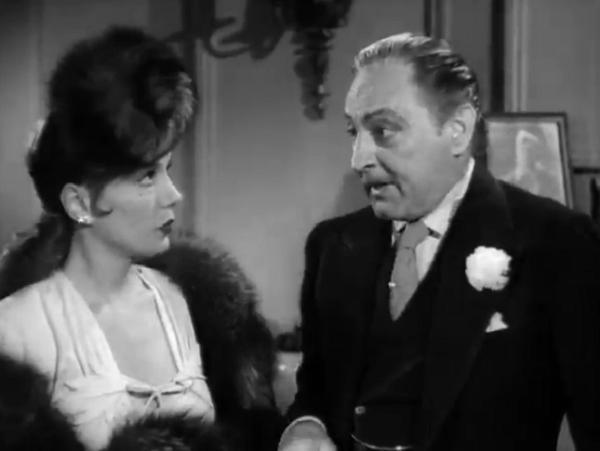 Two stars nearing the end of a long, long road.

John Barrymore– or Jack, as he was known to acquaintances– had his troubles in life. He went through four marriages. He drank heavily. His name was a national punchline. But he didn’t deserve Playmates. Warner Archive wisely stuck this in a two-disk Kay Kyser set, rightfully knowing that if you know who Kay Kyser is and like his Southern potato-salad-style charisma, you’ll probably enjoy it. If you know who John Barrymore is… well, his name ain’t on the cover.

It’s seems oddly fitting that during Barrymore’s last real hurrah in Playmates, that recitation of the most famous speech of Hamlet, has so much to do with death and dying. It certainly fit Barrymore’s own life, having suffered his own slings and arrows of outrageous fortune. Here’s hoping that that final slumber is finally allowing him some restive sleep.

He makes us forget that he’s reciting the soliloquy in the midst of a somewhat lackluster grab bag of actors. This is Brahms playing in the brothel. This is Tasso scribbling away in prison. In the midst of mediocrity, Barrymore the buffoon delivers the artist that was Barrymore and the genius that is Hamlet—parallel figures representative of all inscrutable greats humbled and confined for what the gods gave them. Denmark is a prison, Hollywood is a prison, the world is a goodly enough prison for Hamlets everywhere.

correction: Playmates was released by RKO, not WB

Good catch! It being on Warner Archive must have thrown me. Thank you!

I’ve long been under the spell of John Barrymore; though I would not have been so harsh on the film as you have been, even accepting that, his small excerpt from the Soliloquoy in my view was reward enough. Thank you too for including the 1933 screen test: the assessment of Orson Welles – a giant in his own right – is weighty and good enough for me.

I’m a fan of John, too, but, man, Playmates just makes me sad.

Indeed. I’ve never seen or heard a Hamlet so clearly yearning for that “undiscovered country “.

I agree that the movie “Playmates” is not exactly Academy Award material, but it is a fairly entertaining movie made for fans of Kay Kyser. He and his band were quite popular at the time and I doubt that the people that went to see the movie did it for John Barrymore. And they cared mostly about the music rather than the light plot to string it all together. Yes, it is sad that Barrymore was a shadow of his former self, but there were other talented people in this movie besides Barrymore. The band was really good and the vocalists, Harry Babbitt and Ginny Simms were great. Patsy Kelly was an accomplished comedian (or comedienne?), Peter Lind Hayes was a capable actor and Lupe Velez was who she was supposed to be. Yeah, some of the peripheral actors mailed it in. But if you are a fan of 1940s music and culture (at least in movies) and don’t read too much into the Barrymore angle, it’s a stress-free, entertaining hour of fun.