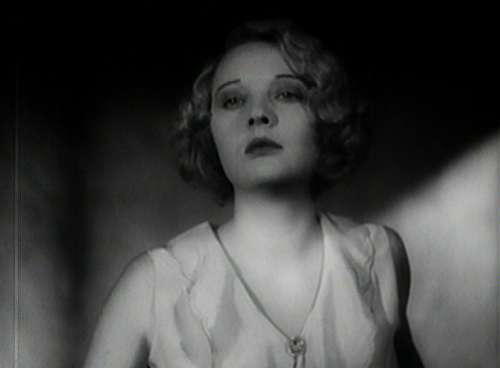 “Just when everything’s going so well for us, you gotta cry!”
“Yeah, us women ain’t got any sense…”

Gilda, a prostitute in New Orleans, just arrived to turn a trick at a hotel when the man who’s there turns out to be the man who drove her into the business in the first place. He’s Piet Van Saal, and his wife is out of town for the weekend. After he attempts to make his way with her again, she snaps and clocks him with a bottle of alcohol. This starts a fire, and, in a panic, she rushes out of the room.

She packs up her sparse room and is just about to flee when Carl, her old beau, busts in. He’s been in the Navy, and completely unaware to the depths that Gilda has sunk. After he showers her with gifts, he slaps her, but once he hears the police siren in the air he agrees to help her out.

Carl smuggles her to a tropical Caribbean island that has no extradition treaty. The island is rather backwater and filled with centipedes and other nasty bugs. It’s only inhabitants are natives and others who are on the run from the law,  a gallery of despicable men who greet the arrival of a white woman– the only white woman– with lip smacking glee.

Carl has to get back to the Navy, but before he leaves, he takes Gilda to the island’s mission and performs a small wedding ceremony between the two of them. He has her promise her fidelity and then he departs.

The island is run with an iron fist by Mr. Bruno. Everyone else slinks away from him when he enters the room, and he chortles as people engage him in worried conversation. “So they say my jail is worse than my gallows, eh?” he smiles. One man notes that they’re all safe thanks to Bruno’s autocratic ways, and Bruno responds with the titular line, “Yes, safe in hell.”

As Gilda undertakes thousands of games of solitaire, the atmosphere in the hotel begins to whittle away her defenses. Mr. Bruno, quite interested in her himself, intercepts letters from Carl and keeps her off balance. She finally breaks down and allows herself one night of partying, where she reveals to the other hotel residents how she ended up on the island. This endears her to them, and soon many of the men find themselves feeling protective rather lecherous.

But when a surprise guest appears on the island, Gilda’s given a chance to escape… until the gun she’s given has to be used to its logical ends. There’s a trial, and Mr. Bruno’s attempts to blackmail her backfire, as she instead opts for the gallows. Carl arrives only too late, and she leaves him with the impression that she’ll be following along shortly. That’s not what’s going to happen, though, and instead she marches into the sunset, redeemed.

A note on the long forgotten Dorothy Mackaill: count how many times she gets away with slapping people in this movie. She’s an aggressive firebrand who does some excellent work as she swings between terror, anger and hope.

Safe in Hell is about how ugly the need for sexual power can get. Director Wellman’s camera is so energetic and crazy that it’s a dizzying experience, and matches Mackaill’s feisty spirit perfectly. Wellman takes rather stodgy material, most of it set in one hotel, and imbues it with a lurid sense of anger and dread. It’s an amazing experience, and something I really want to go into some depth on.

I wanted to run through a few (okay a lot) of screenshots of the film in order to talk about Wellman’s visual sensibilities, since I think this film proves just how far ahead of the game he was of other commercial directors of the time.

The Body as a Commodity

“On the level? I never thought you’d end up like this!”

This is the fourth movie in so many weeks I’ve watched that has dealt with the act of women using their body for monetary gain. A lot of critics are quick to point out the similarities with with Rain (and the 1928 silent version of that film, Sadie Thompson), which is similarly about a woman trapped on an island with lecherous men running afoot. While that certainly informs the setting as a forebear, the characters and situations couldn’t be much different. Thompson has a ball as a prostitute, while Gilda most certainly does not.

A couple of sites I saw lamented Gilda for becoming a ‘good girl’ during the course of the film, which strikes me as more than a little wrongheaded. They seem to view sexually voracious as a person’s natural state, which it doesn’t seem to be for Gilda. Gilda was forced into being a prostitute– her penance for being raped by Piet. Her character is abused by the wrong man with the wrong wife, and death is her only escape. Having her go out as the full Sadie Thompson would have been hollow, horrible, and wrong.

Safe in Hell is more similar to the Kay Francis movie I reviewed a few weeks ago, Mandalay, though that one came out three years later. Mandalay may represent a sort of regression, as its heroine finds personal redemption through murder rather than patriarchal damnation. While I won’t condemn Mandalay, the conflict in Safe is a more interesting examination of societal ills. Mandalay is a weepy, Safe is a lightning rod.

And that’s because the film’s portrayal of the white male sex is so inflammatory that it’s hard not to resent the whole lot of ’em! Running down the male characters, it’s awful. Besides the cadre of drooling islanders, there’s Piet, who is so interested in having sex with her, he even easily forgives her for trying to murder him. There’s also Mr. Egan on the island, who designates himself as Gilda’s protector and then grows furious when he finds out that she’s had sex before. Making it worse, during her murder trial, he consoles her and then immediately leads it back to a pickup line. Basically “I bet you won’t be convicted… now do you want to have sex?”

I think Egan’s in the film, though, to make Carl look good. Certainly Carl is cautious since the last time he left her, Gilda, you know, went into prostitution, but he still demands her total isolation while he’s away. Is he being safe or is he being a monster? His demands make any pleasure Gilda experiences become illicit, which complicate her morally and help further imbue her with the guilt complex that winds up being her end. He’s so terrified of the slippery slope that he keeps her precariously perched on a pillar.

But then it could still be argued that Carl is the ‘good man’, a person that someone needs for help. The thing about Safe in Hell is that it’s a condemnation, not a solution, of the situations that men force women into. It’s vicious, beautiful, and well worth seeking out.

The most accurate criticism, pro and con, was delivered by a couple in the adjoining seats. The young woman wept piteously and the young man reassured her: “It’s only a motion picture.”