“I have been memorizing this room. In the future, in my memory, I shall live a great deal in this room.”

I’ve been writing this site for a while, and I want to offer my readers some advice: see Queen Christina in a movie theater. In a nice, lush theater with a willing crowd. It is one of the best experiences you will ever have. And I don’t just say this because I’ve done it myself, but because it’s a movie that’s built to be larger than life. A weird sort of epic not built on battles between armies but that ensconced within a woman’s soul.

Christina (Garbo) has been on the throne of Sweden since she was a little girl, and the country has been engulfed in a war for even longer than that. A string of successes have turned the noblemen of the country cocky, while the peasants are eager for peace. But Christina’s troubles don’t end there– numerous suitors throw themselves at her, each for their own selfish or duplicitous urges. She indulges in these affairs and remains, but they strain on her as each turns out to be as phony as the last.

Christina chafes against the double standards that abound. More than just her expected role as a woman, her role as a ruler sees the expectations soar. To her people, Christina is everything– a domineering bully, a fragile woman, a brilliant leader, a lusty monarch, a kindly diplomat, and more. And Christina wears each mask of those over Garbo’s own impenetrable face, with the strain showing by the second.

These changes when she meets Antonio (Gilbert), a Spanish envoy sent to present her with yet another suitor. They meet in the wilderness where he mistakes Christina for a young man and he himself wears fluffy, doughty furs like he’s the mother-in-law from Barefoot in the Park. They meet again the pub, him still believing her to be a man, where they’re forced to share a room. The sexual chemistry between the two baffles Antonio until she undresses and a sense of relief covers his face. Oh, that’s why.

Antonio may be the first time that she’s ever had power over her image– how’s she’s perceived– with anyone. He didn’t fall in love with the queen (though when he finally figures out who she is, it’s priceless), and he didn’t even fall for her charms as a woman. He fell for how he saw her, this gorgeous, asexual creature who so desperately needed to be freed from all of the strains that he can gleefully choose to ignore.

Some have called Gilbert the weakest link in the film, and I can’t say I completely disagree– was Ramon Novarro busy that week?– but while he may not be as delicately sensual as Garbo, he’s far cannier at making us understand why Christina sees him as an outlet, slow and silly as he may be.

Sweden in general is less-than-thrilled about the pairing, especially the archly jealous Magnus (Kieth), who behaves like what most other pictures would categorize as a woman scorned. He orchestrates the nobles and the peasants against Christina, though when tested, her powerful leadership and wit see her through.

His final push forces Christina to make an unfavorable marriage or lose her life, and she instead chooses to abdicate. In one final act of anger sees Magnus challenge Atonio to a dual outside the country’s borders as Christina races to meet him on the boat that will take them both to Spain and freedom.

The way Mamoulian shot the climactic sword fight is especially daring. Christina’s elation, her escape from her responsibilities, is the real focus, while the cuts back to the thrilling duel is only caught in flashes, sometimes behind trees, other times on distant sides of the frame. The duel’s finish isn’t seen, but it’s aftermath is, with Antonio’s near dead body presented to Christina, all of the passion and love that she’d given up everything for left to fade away in her hands.

And then there’s the film’s last shot. The ship is underway for Spain with the former Queen aboard and the body of Antonio under wraps. 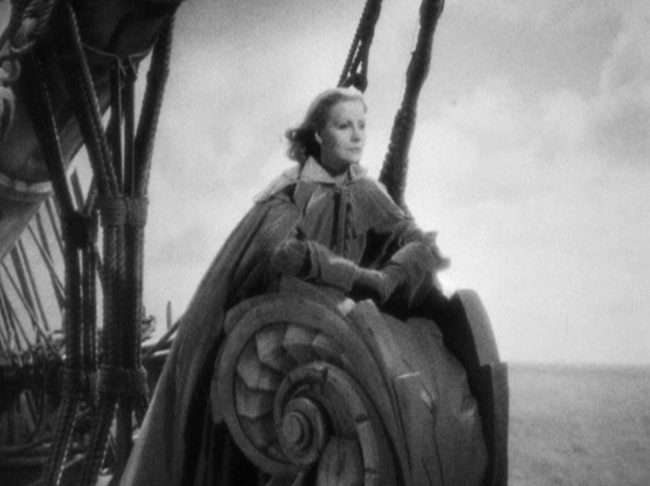 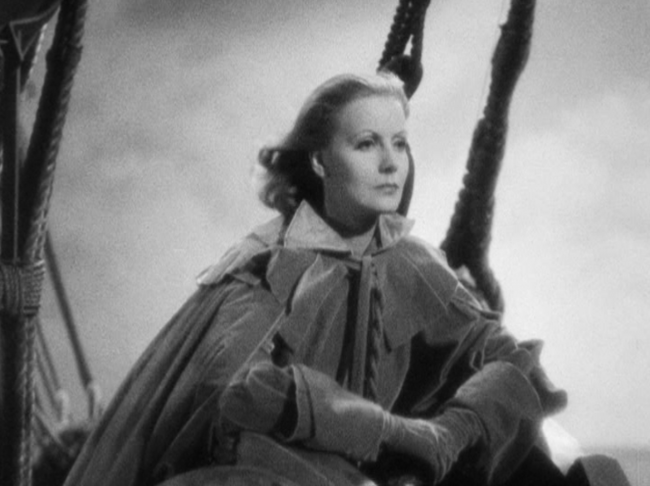 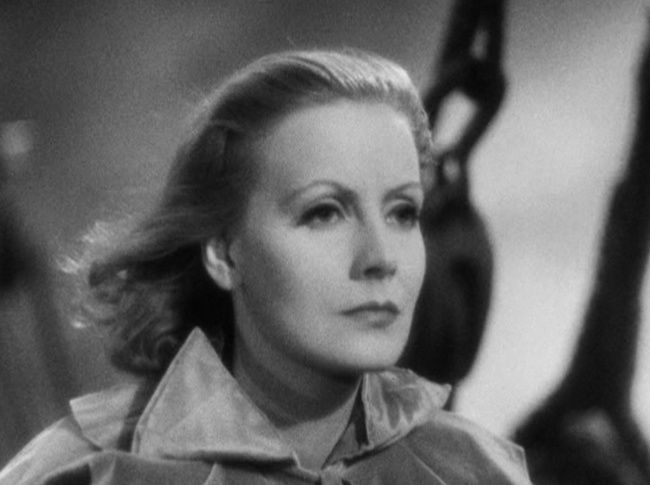 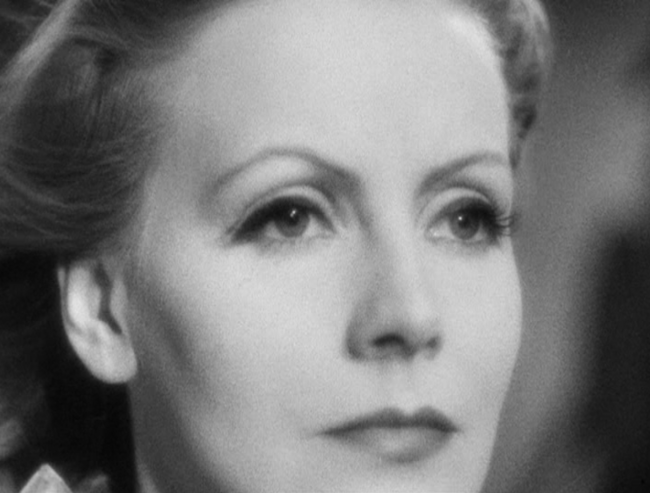 What does the future hold for Christina? The beauty of it is that Garbo’s expressionless face invites you to interpret it as you want.

Some see this moment as a void. Christina stares outward from the prow, and we don’t follow her gaze– a sign that her future has disappeared without Antonio or her title. I tend to take the more optimistic route, seeing this as Christina’s first few moments without any of her many masks on. A reckoning, if you will, with the freedom that her love for Antonio has given her as well as an uncertain but an open future offered.

But, of course, thanks to the way the final shot plays out, the ambiguity never tips from the cup being half full to the cup being half empty. It’s forever etched in that uncomfortable middle, something for audiences to read their own desires into.

And that may be what I treasure most about Queen Christina, a fully formed portrait of a woman that is trying to fully form herself in a world filled with selfish backbiting and double edged expectations. One can make the case that the movie is a riff on stardom or even Garbo’s life itself, a peon to the uncertainties of fame and fortune. Or one can read it for what it is, a journey of self discovery that only ends in death and emptiness– or joy and triumph, if we’re going back to the glass half full stuff.

Queen Christina is smart, sophisticated, brazenly funny, and altogether uncategorizable. The production design is beautiful, the screenplay is witty and fun, and the supporting cast, from C. Aubrey Smith playing a basset hound to Lewis Stone as a man torn between pride and fatherly duty, is superb. If you want a great example of what cinema is, you can’t do much better than this.

According to files in the MPPA/PCA Collection in the AMPAS Library, on January 8, 1934, Joseph I. Breen, director of Studio Relations of the AMPP, objected strenuously to the film’s bedroom scene and suggested many deletions. Breen felt that “sex immorality” is presented in the story as “attractive and beautiful and made to appear ‘right and permissible,'” a definite violation of the Code. In addition, Breen and several state censors objected to the line, “This is how the Lord must have felt when he first beheld the finished world,” which is spoken by Garbo in the bedroom scene. A review board consisting of Carl Laemmle, Jr. of Universal, Jesse Lasky of Paramount and B. B. Kahane of RKO screened the picture, however, and deemed it acceptable.

But if the glamorous Garbo was a far cry from the real Christina – a troll-like, hygienically-challenged figure given to dirty jokes – the sexual politics on the set certainly mirrored the spirit of Christina’s decidedly unconventional life. Garbo developed the project with actress-writer Salka Viertel, who was rumored to be her lover, insisted that the male lead go to her former fiance and silent screen co-star John Gilbert, then ended up in a liaison with the film’s director, Rouben Mamoulian.

None of that got into the press of course. MGM’s publicity department was too busy heralding Garbo’s return to the screen in the role she was born to play. As a fictional character, the Christina in the film was indeed perfect casting for Garbo. The aloof, independent queen in the film gives up her throne for love of a Spanish nobleman and, when he dies, leaves Sweden to take her slain lover back to his native land. The real Christina was a lesbian, who gave up the throne to pursue artistic studies in Italy, where she lived as a man under the name Count Dohma. Ironically, the character Garbo played in her first big film, The Saga of Gosta Berling (1924), was named Countess Dohma. The only concession to the real Christina’s sexuality were some subtle hints that the film character was romantically attracted to one of her ladies in waiting and scenes of Garbo hunting and meeting with advisors dressed as a man – which only added to the star’s glamour.

What made Garbo such a perfect actress for silent films is that she could say so much using only her face, words were completely unnecessary.  The great thing about Queen Christina is that she gets two exquisite, very famous scenes where all she does is emote.

The first half of Queen Christina is rife with lines and moments that could only have been realized in a pre-Code.   Garbo is the perfect actress for this gender-bending role, dashing off lines like this with believeable intensity and ardor:
Chancellor:  But, your Majesty, you cannot die an old maid!
Queen Christina:  I have no intention to, Chancellor.  I shall die a bachelor!

Speaking of dressing up as a man, I could not help but wonder if this behaviour were reversed, if a male member of the royalty dressed up as a woman, would this kind of behaviour flown at all? The Celluloid Closet did a good job of addressing the way effeminate men, or sissies, were portrayed (usually negatively or for the purposes of comedy) during the 1930’s. As far as Queen Christina is concerned, outside of a situation where Christina is actually mistaken for a man, her cross dressing is not used for comedy and overall Christina herself is treated fairly respectfully. However, I could not help but wonder if this would have held true if the movie had been about a King dressing up as woman.

It seems wholly appropriate to me that Garbo spends so much of the scene in front of both the mirror and, on the other side of the room, a religious triptych. Garbo was as much about images as she was about acting, holding poses that represent emotions rather than embody them from within, a style more akin to kabuki theater or the pantomime of the silent era than the Method approach actors have held to for more than fifty years. In that sense, Garbo’s performance, like the triptych on the wall, is literally iconic—a pictorial representation whose form suggests its meaning. It’s not “modern,” but then when did we buy into the notion that “modern” and “better” were synonymous. In any event, I wouldn’t want to throw out Garbo just because I also like Brando, any more than I’d throw out Rembrandt just because I also like Picasso.